Most first-time builds look like first drafts. They are big on effort, but lacking in execution. Not so with this 1983 SR400 cafe build by Carl Johansson of Sweden. This has to be one of the cleanest, most well-sorted SR400’s we’ve seen.

Here in the States, we only got the longer-stroke SR500, and only for the model years 1978-1981, making them pretty coveted. The Yamaha SR bikes make such great old-school cafe builds, with their British-inspired design, minimalistic electronics (kickstart only), and strong aftermarket. 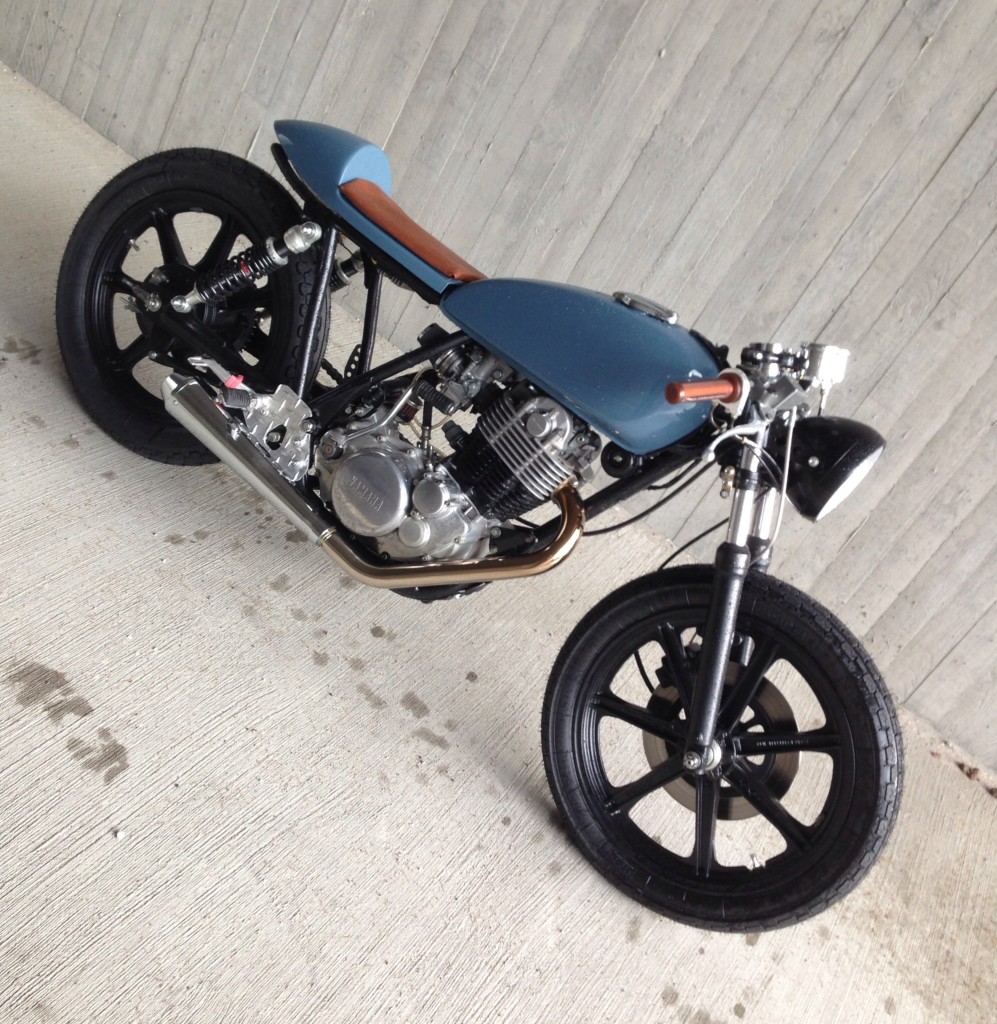 I’m from the Swedish westcoast. Bought this Yamaha SR400 -83 stock last fall. After been riding motocross all my life I wanted to try something new. Spent ALOT of time before and during the build to figure out how to get it the way I wanted and finding the parts I wanted. You want everything to harmonize to get the overall good look.

The entire bike was taken apart, (except for the engine). Frame was stripped, cut and modified. All black parts were powdercoated. Front forks were lowered 4cm and stiffened up. The shocks are YSS. All bearings, sealings etc are all new, in fact, with all the new parts it pretty much feels like a new bike! I made a few parts from brass, for instance the registration plate holder. Probably one of the coolest things on the bike are the homemade rearsets. My father helped me out with these. The footpegs are from an old Kawasaki Ninja that I found at a motorcycle junkyard. We molded a prototype out of plexiglass and then made the final ones out of checker plate to add some texture and an industrial feel. Other than the pipe, muffler, filter and oil line the engine is stock. The tyres are Heidenau.

Parts were bought from all around, America, UK, Germany, Spain, Holland… The build is pretty much done except for the seat, wanted to ride it so bad this summer so I just made this temporary thing, it gets the job done but doesn’t look the prettiest. I don’t know its weight yet, but I’ll find out soon.

I’m really happy with the final result. Wanted a low, clean caferacer and I exceeded my own expectations. Couldn’t have done it all without my father who is an oldschool genius. I also must thank my buddy Marcus, the last pic includes his Kawasaki Z400, he built his bike last winter as well. We had many long conversations during our builds and his bike turned out awesome!

The Yamaha SR400 is a four-stroke single first introduced in 1978 as a street version of Yamaha’s venerable XT500 enduro bike.  It has remained in nearly continuous production since its introduction, and the big news in recent years has been the bike’s introduction to the US, Australian, and European markets. The SR500, a longer-stroke version, was available in the United States for only three years (1978-1981).

These bikes are rated at slightly over 30 horsepower, with a dry weight of around 350 pounds. They are kickstart-only, and the many see them as the single-cylinder siblings of the XS650–itself inspired by the Triumph parallel twins. These bikes have long been a favorite of several custom builders, including Brat Style Japan and Deus, who actually offer a Deus 400 kit for contemporary Euro-spec models.