Today, we’re proud to present #KEMEH003, the third build from Kemeh Fabrications of Ipoh Perak, Malaysia.  Founder Irwann Cheng builds both custom bicycles and motorcycles, mostly trackers and scramblers. This bike, otherwise known as “Kun Faya Kun”–an Arabic phrase for Que Sera, Sera (What Will Be, Will Be)–is based on a 1979 Honda XL125S.

Don’t know much about the XL125?  You should.  Frank Melling, founder of Thundersprint, wrote a love song to the Honda XL125 on Motorcycle USA a few years ago.  It was a favorite steed of the CIA-funded Mujahideen when they were fighting the Soviet invasion of Afghanistan in the 1970s, and Melling says of the bike:

The power plant of the XL 125 is part of the bloodline of one of Honda’s greatest ever designs. The forefather of all the XLs was a 100cc powerplant, which first saw the light of day in 1970. It is a thing of intense mechanical beauty in that it does its job so wonderfully well. The air-cooled, SOHC, two-valve engine makes the Rocky Mountains look like a temporary fixture in terms of its utter, total and complete reliability. Change the oil regularly, and the beautiful powerplant will run to the end of time – and then some.

The bike offered 13 horsepower, 80 mpg, and it was “stone-axe reliable.”

In any case, Kemeh’s build immediately caught our attention with the bare bones, blacked-out look.  We previously did a small write-up of this little beast in our Finds section, entitled Nifty Honda XL125, but now it’s time for a full feature. XL125 Scrambler in the Builder’s Words

Here is what builder Irwann Cheng has to say about the build.

This bike is the third bike from Kemeh Fabrications, hence the name, #KEMEH003.

It started out as an old Honda XL125S which I purchased from an old gentleman who used to be a motocross racer. The condition of the bike was poor, and it had been left untouched for 20 years.

I started by stripping it down, cut and grind all the unnecessary brackets and tabs to get that clean look without compromising its rigidity. Welded a rear frame loop and powdercoated it in black. Then I overhauled the engine, serviced the carb and fabricated a custom 1.25inch to 1.5inch exhaust system before i finished it off in black. 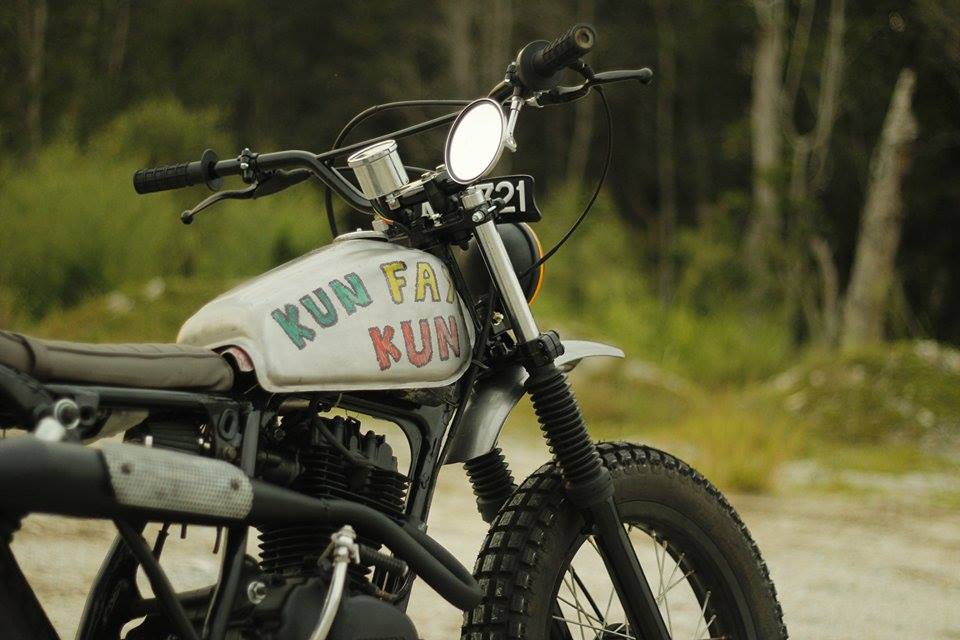 Seatpan was made using 1.2mm stainless steel plate and upholstered at car seats specialist near my shop. Front light was from my friend’s rally car. Rear lamp was a gift from another friend. No battery, no signal light because i wanted this bike to be a minimalist (lol), and last but not least, Kun Faya Kun is an Arabic phrase for Que Sera Sera which means what will be, will be. Well whatever happen, will happen. Especially when I push this bike to its limit.