We’re always thrilled to showcase the first custom bike from a promising young builder.  Like first loves, there’s nothing quite like your first build. There’s that first fumbling through wiring looms, those hours spent over disassembled carburetors, that struggle to see what the bike looks like under all those layers of factory chrome and foam.  And there’s nothing quite like cracking the throttle for the first time on a public road, riding a bike you built in your own shed or garage. 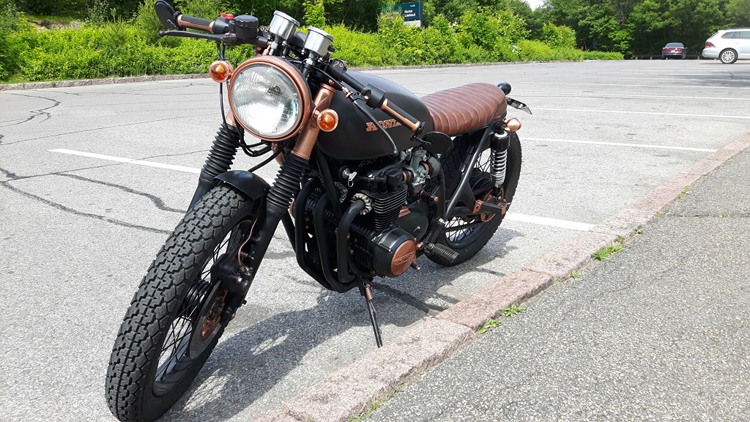 Patrick Couturier of Gatineau, Quebec, certainly knows these sensations.  He bought this 1973 Honda CB500 on April 3rd and finished the build on June 12th…what a whirlwind!  We’ve been seeing a lot of neat customs come out of Canada of late, from Al Baljeu’s XS750 cafe racer to the CB450 tracker by father/son team Tyler and Brent Thompson. The CB550 gets most of the attention in the custom scene, but its predecessor was a pretty neat machine. The CB500 Four was introduced in 1972, a 50-horsepower standard that offered similar styling to the CB750 and performance to rival the 650 twins of the day.  Motorcycle Mechanics called the bike a “show-stealer.”  The little machine could reportedly hit 115 mph, and a CB500 won the 1973 500cc TT Production race on one, beating out Suzuki T500 two-strokes. The bike was only produced from 1971-1973, as the CB550 came out in 1974. This is my first build. I bought it on April 3rd and rode it on June 12th! I tore it down completely and had the wheels, tree, tube, fender and frame powder coated. Almost every thing is new except inside of the engine. This includes all cables, switches, electric ignition, mac 4/1 exhaust, Antigravity battery, and much more! I had a machinist friend of mine make some new extra tight swingarm bushings, and the bike goes really well down the highway! I am looking forward to building another one soon!