Today, we’re thrilled to present the most radical desert sled we’ve ever seen:  “Indominator,” based on a (now-unrecognizable) 2014 Triumph Scrambler.  This build is the work of San Francisco’s Modulus Creative, whose mission statement is music to our ears:

“Modulus creative exists to prototype the silly little things that stand between us and our most adventurous explorations.”

Dave, the mad genius behind Modulus, gives us the full story on this beastly build below. (Words by Dave of Modulus Creative. Highlights by us.)

So, the appeal of the Scrambler is the heritage, the lines, the proportions. You get to own a piece of history in the way that a new Camaro, Mustang, Challenger owner does. It’s a fantastic all-rounder like they used to make them:  commuter, weekender, occasional trails. But good things can never really be let alone. When you love something (or maybe just when I love something), it’s going to get worked and reworked, until it is almost completely indistinguishable from the original. There is a Frankenstein, fiendishly twisted kind of fascination I have with rearranging the bone structure of bikes. New geometries, new suspensions, re-purposing them for some really far fetched purposes. Stumbling across this bike is kinda like like finding an abandoned GI-Joe in the sandbox with the ninja turtle legs and a light saber taped to the hand and a buzz-light year helmet glued on. I say to myself, “if only it just had a little more _____” and then out comes the angle grinder. Anyway once you cross over, and are completely mentally prepared to take a frame under the knife, it becomes an engineering obsession. Inches and angles, stress and strain concentrators, aesthetic or intentional lack there or, everything “means something.” You can’t sleep for weeks. 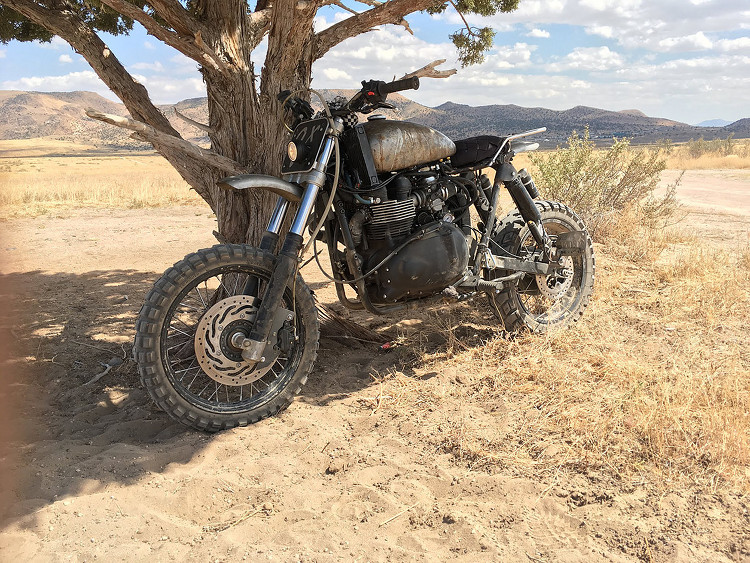 Couldn’t add more suspension without more ground clearance but the swing arm doesn’t lend itself to much more than an inch of lift. Yah — it all had to go. Never thought again about looks, rather leave all the imperfections: ripped exhaust wrap, naked welds, duct tape seat, whatever — its all getting re-worked on the next go around. So, half cocked and dangerous as ever I hit the trails. Zillion crashes deep now (into a 2014 efi model I bought new in 2013). Fuse box graveyard, fuel pump implosions, several sets of shocks and springs, four seats, two oil coolers, five pegs, front axle and many many more casualties have earned me the right to say — its probably time to start over this winter, but damn was it fun getting to this point! Sisyphus pushes a rock, builders a push power tool on button, but it all levels out when the fuel pump dies seven miles from base camp in Tahoe. Stay tuned for the revamp… probably about this time next year. Similar concept, but something pre-apocalyptic, something you could actually ride to work and/or downtown with.