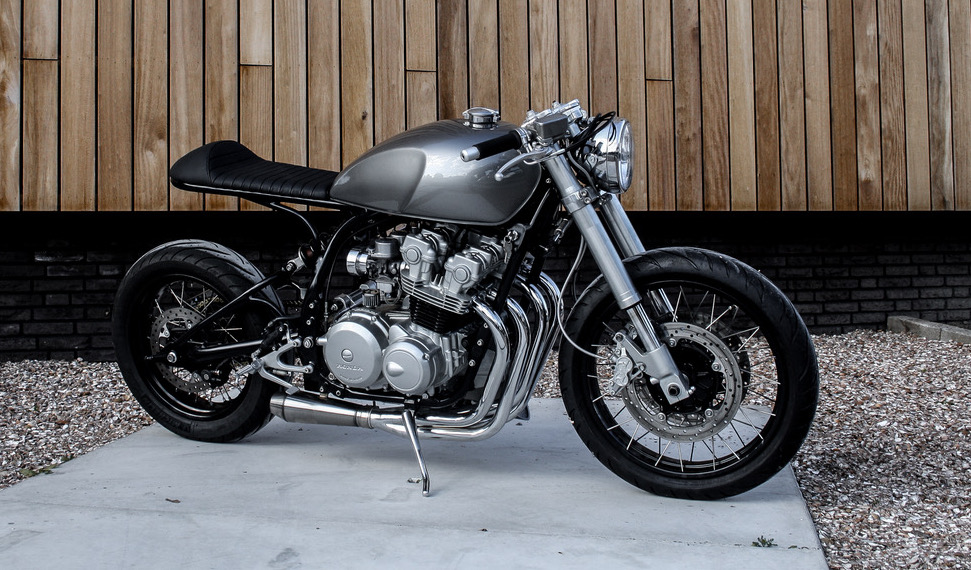 We see a lot of Honda CB750 builds, but few stand out like this silvery mesh of past and present. It hardly even looks like a CB750 any longer, but more like the dream machine of some parallel universe.  The bike is a collaboration between Mujjo and 14Cycles–both of The Netherlands. That is a Dutch-built machine comes as no surprise, given the minimalist purity of the design. Below, we interview Remy Nagelmaeker of Mujjo for the full story on the build.

Please tell us a bit about yourself, your history with motorcycles, and your company. This bike has been built as a collaboration between me (Remy Nagelmaeker, Co-Founder/ Designer of Mujjo) and Eelco (Founder and owner of 14Cycles). I did the design and part-sourcing, Eelco did the build/craftsmanship. My personal history with motorcycles is very short, to say the least. Since this is my first bike, I really didn’t know what I got into. As you can imagine, I learned a lot in a short time, however, Eelco’s expertise and craftsmanship made up for it big time. 14Cycles’s build queue is currently open and Eelco is taking orders, so Dutchies out there be advised! Design-wise the vision was very much in-line with the work we do at Mujjo. The design is very clean and simple. There’s not much on this bike that you could leave out. It wasn’t supposed to look like a modified CB750, but instead, like a bike of its own. And I think it really does. The purposely open subframe and sleek upholstery balance the large block. The litium ion battery has been moved out of sight (hidden below the swingarm). The Zephyr tank is relatively wide, which work very well with the big block. The upholstery is simple and sleek emphasizing the stance of the bike. Focus has been on quality which is why this bike is build with virtually no aftermarket parts (apart from the speedo, rear-mirror, and exhaust). The decision to use donor parts over off the shelf aftermarket parts was made for better build quality and achieving the solid look we were after. Parts come from a wide variety of donor bikes ranging from a Yamaha YZF R1 for the monoshock and rearsets, Suzuki GSX-R1100 for the USD fork and hand controls, BMW F800GS for the rearwheel, BMW R1100GS for the front wheel, Kawasaki Zephyr 1100 for the tank to a Honda Goldwing for the front sprocket just to name a few. Lots and lots of effort has gone into making all the donor parts work together seamlessly. It’s really well thought-through or in some cases we’ve had to re-build something a couple of times until we got it right. The color is Donington Grey, one that BMW developed for X5M (and X6M). It’s a deep grey that contains lots of flake to make it more reflective which beautifully highlights the curves on the tank.