There’s little we love more than a dual-purpose, unkillable thumper of 80s vintage. Here where we live, there’s a small group of riders who spend their Sunday afternoons finding trails, fire roads, and urban jumps on their Honda XR/XL dual-sports. Yours truly, whose first-ever bike was an XR200, has been considering the purchase of an XR to liven up the weekends. 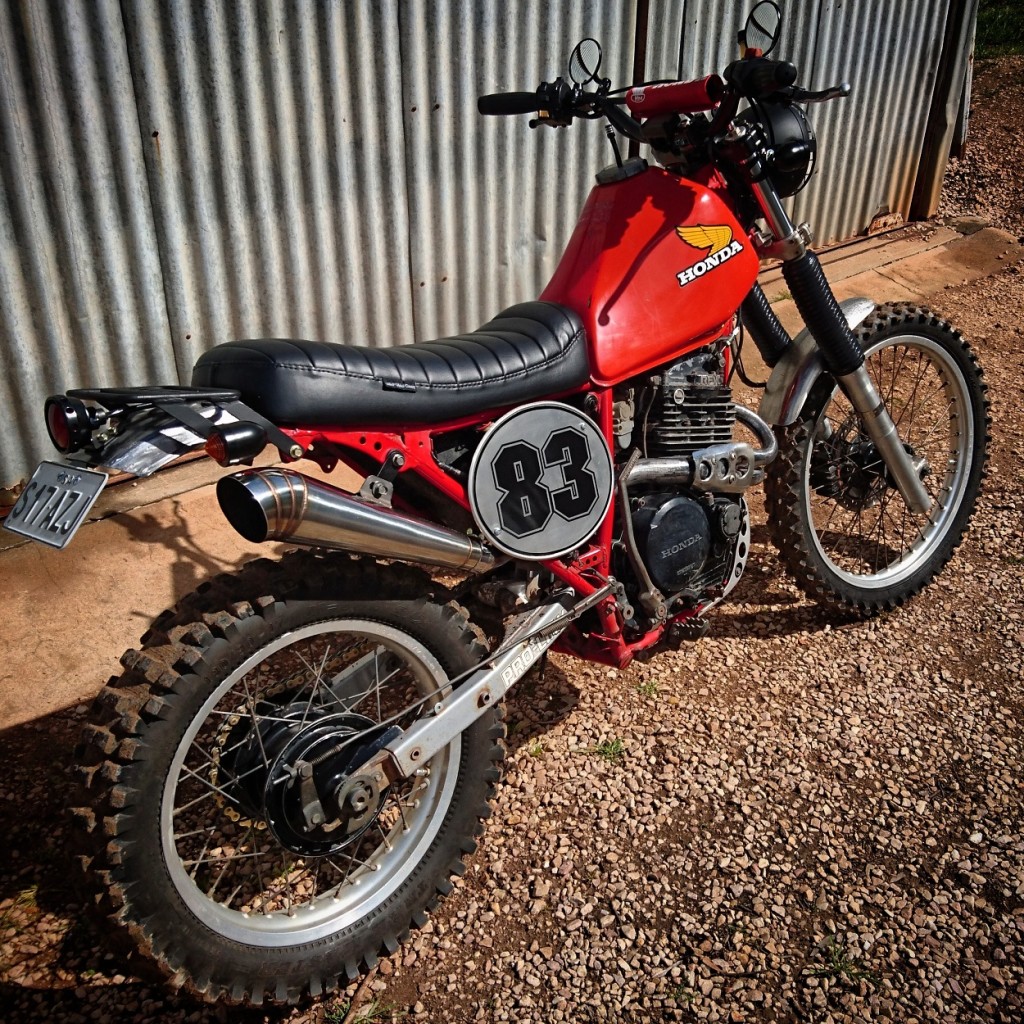 Enter Mark Weckert of Australia’s Penroyd Garage, whose 1983 Honda XL600R scrambler caught our eye. The Honda XL600R, available from 1983-1987, was a 50-state legal dual-sport with cush drive, shorter stroke/larger bore, and wider-ratio transmission than the XR. What we love so much about this dual-sport scrambler is the stylistic subtlety, and how well Mark retained the machine’s functionality. He says:

“The intention with this bike was always to modify it by ditching the plastics and giving it a more classic vmx/scrambler look…It’s a dirt bike, and living in a rural area it gets used as such!”

Below, Mark gives us the full story on this incredible machine. (Words by Mark Weckert of Penroyd Garage. Highlights by us.)

I slapped the bike together before the 2016 Distinguished Gentleman Ride, as I have the ambition to ride a different project bike in the event every year (with a habit of only getting them completed just in the nick of time!). Last year’s event was my third consecutive at the local Adelaide ride. The bike itself, a 1983 Honda XL600R, was purchased a couple of years ago from a farmer who had owned it from new and used for mustering stock on his outback sheep station…not an easy life but probably one well suited to the robust Honda XL600R.

Having grown up on a farm myself and learning to ride on a 1979 Honda XR75, the big brother XL/XR bikes were something I always interested in, and this XL600R will be a keeper. The intention with this bike was always to modify it by ditching the plastics and giving it a more classic vmx/scrambler look. Time (and budget) wasn’t going to permit a full strip down/rebuild/repaint, so I decided to just build it to a rideable mock-up stage and do the rest next winter. When it came to cutting the rear frame to accommodate a custom seat hoop my heart just wasn’t in it… The original style of the bike had grown on me, even with its faded plastics and horrible blue seat! With that in mind, rather then taking to it with the angle grinder, I went ahead and fabricated a fiberglass seat pan to suit the existing frame and mounting points, giving me the ability to restore the bike back to stock if I ever wanted to do so.

To tidy up the frame overhang behind the seat I fabricated a rear rack that tied it all together and allowed me to mount the steel rear guard – sourced from a Kawasaki KE100 Ag-bike and cut down to fit. Up front, the original brakes were overhauled and shocks rebuilt. The plastic enduro style front fairing/headlight has replaced with 6 inch steel bucket unit with a mesh headlamp grill made to suit. The front guard was a cut down $10 swapmeet find and was fitted to allow adjustability if and when the 21” front rim is replaced with something smaller.

In the controls department a mini DanMoto digital speedo/tacho unit was fitted just below the vintage Honda handlebar crash pad (another swapmeet find). While bar end mirrors were made to fit inwards and the front brake master/lever replaced with a remote reservoir setup from an R6 Yamaha. The stock header pipes were retained but the heat shield replaced with one cut down from another I had lying around. An aftermarket stainless steel slip-on muffler was sourced and only required minor modification to the original pipe to make it fit.

The custom seat was probably the most time consuming (and frustrating) part of the whole build. After hours spent fibre-glassing, perfecting the shape of the seat pan and foam to follow the lines of the frame and tank it was sent out to be upholstered (and that’s a whole other story). The end result wasn’t quite as desired with some workmanship issues…. but it’ll do for now. To complete the look, the plastic side covers were replaced with aluminium VMX style race plates, which hide the stock (for now) air-box and battery.

It’s definitely not a show bike, but that’s not what this build was about. It’s a dirt bike, and living in a rural area it gets used as such! The original paint work shows its age but it all adds to the overall character and style of the bike, and for now that’s all I want. All up, including the cost of the bike, I’ve put somewhere around $2000 AU into the build, and taking into consideration how expensive custom and aftermarket bike parts can be in Australia that’s not too bad. (It also goes to show you don’t need gixxer front-ends, custom swingarms, chopped frames and big dollars to make a kickarse looking bike – but that’s just my opinion!). The Australian summer is here and the bike will see its fair share of back-road action before winter. The plan then is to strip it down for some fresh paint, engine rebuild, and some new rims with chunky dual-sport tyres, along with some other changes for version 2.0…. Or it might just stay the same!

I grew up on a farm in the quiet rural area of the Clare Valley and Mid North of South Australia, a grape growing and wheat cropping area – 100 miles from the nearest major city of Adelaide. Penroyd is the name of the family property I grew up on, and apart from spending the odd year away here and there, it’s where I still live today. The surrounding farm land has now been passed on after the death of my father in 2000 when I was 17, but I have kept the Penroyd name alive through the creation of Penroyd Garage. I wouldn’t call it a fully-fledged business, but it’s where my passion is and something I do on the side when I’m not involved in the local farming industry.

A typical story – I obtained my passion for anything mechanical through my father, who had a large collection of vintage tractors and classic cars. When he wasn’t busy on the farm he’d be tinkering away on some old tractor or car and I was usually by his side learning the tools. Farms and dirtbikes go hand in hand, although my relationship with them got off to a rocky start – the very first time I let the clutch out on our Honda XR75, around the age of 6, I subsequently crashed it straight into the side of a barn (no thanks to my older sisters for neglecting to tell me where the brakes were on that one…) Some tears may have been shed but I wasn’t deterred, and I’ve been riding and toying with motorbikes ever since.

It goes without saying that the death of my father left a pretty big hole in my life. We shared a lot in common and spent a lot of time together, whether it was working on his old tractors, participating in a vintage/classic car rally, or attending a motorsport event together. He always told me however not to get in to restoring cars myself, “as it was too much money, and too much work!” Of course the first thing I did after his death was go out and buy an old heap of junk to do just that. It was a 1967 Ford Cortina GT mk2, and over the next couple of years I committed myself to getting it back on the road. The engine was rebuilt in auto-shop class at high school while the body repaired and painted thanks to the help from my uncle who was once the local Ford dealer and mechanic.

I still have that car today and with what I learned from that project and the time spent with my father I went on collecting and fixing old cars. That’s pretty much how Penroyd Garage has come about. I mostly buy something in need of repair or restoration, whether it be a classic car or bike, I fix it up, and after getting a bit of enjoyment out of it, I then on-sell it. Sometimes for a handy profit and sometimes just covering costs, but it’s the process and the satisfaction I get from the finished product which is the main reward. My first custom motorbike build came about when a friend of mine wanted something unique to get around town on. She got caught up in the whole hipster/custom motorcycle movement which was just taking off in Australia and I saw it as a good opportunity to get involve myself without footing the bill! The base bike was a 1996 Honda CB250 which I customised into a clean looking brat/scrambler, and I’m probably more proud of that build than my current XL600R. Unfortunately, since building it, the little CB250 has spent way more time sitting in the corner of her garage than it should, but occasionally I get the opportunity to take it for a blast around the city (I’ve probably put more miles on it than she has!). Although I find it hard in my area meeting people that share the same level of passion I do for bikes/cars etc. it has been great seeing the power of social media and using Instagram to connect with people from all over the world who do!