“The bike virus only sleeps but never dies.”

Such were the words of Thomas Hoellweger, an Austrian native who began customizing two-wheelers when he put cardboard fairings on his kid’s bicycle. More than a decade ago, when his son was two years old, Thomas sold his beloved Africa Twin — but he put the proceeds into a fund for when he decided to ride again. Fast forward many years, and it was time to get back in the saddle — literally. After much research, Thomas, who had a background in mechanical engineering before getting into IT, opted for a 1995 BMW R1100R with wire wheels. The 80-hp Bavarian oilhead was a superb touring bike, but ugly, and not quite as agile as Thomas preferred — especially in the mountains around his home. Thomas proceeded to build the perfect weapon for the Austrian mountain roads around his home near Lake Wörthersee, working with a local civil engineer to ensure the bike would be street-legal according to strict Austrian regulations around customization. The result is a BMW R1100R restomod he likes to call “Dr. Jekyll / Mr. Hyde” — a bike that doubles as a daily commuter and mountain assault vehicle.

Below, we get the full story on this lightweight, performance-enhanced oilhead custom. I’m from Klagenfurt, Austria, near the beautiful Lake Wörthersee with lovely landscape and loads of mountain roads around.

I left my roots in mechanical engineering after secondary school. After studying business, I’m now in IT business for more than 15 years, responsible for a small team of great people.

Two wheels were always my thing and starting from kids bicycles I owned all kind of bikes from 16 to 36 years (Fantic Caballero 50, Vespa P200E, Yamaha SR500, Honda Africa Twin). Starting with cardboard fairings on kids bicycle, not one of my rides stayed unmodified. In the last 20 years, I also built 8 bicycles: racebike, singlespeeder, mountainbike.

After selling my Honda Africa Twin when my beloved Son was 2 Years old (in 2006) for 2850 Euros I donated the money to a personal fund “Whenever I want to ride again.” In 2015, I had to confess that “the bike virus only sleeps but never dies.” As I’m now a family man I wanted not to go for a “real motorcycle” but “why not buying something old to restore?” Customizing a Motorcycle and ride it street legal was still one thing I wanted to go through to prove I’m able to do (not to say – it’s on my b… list). 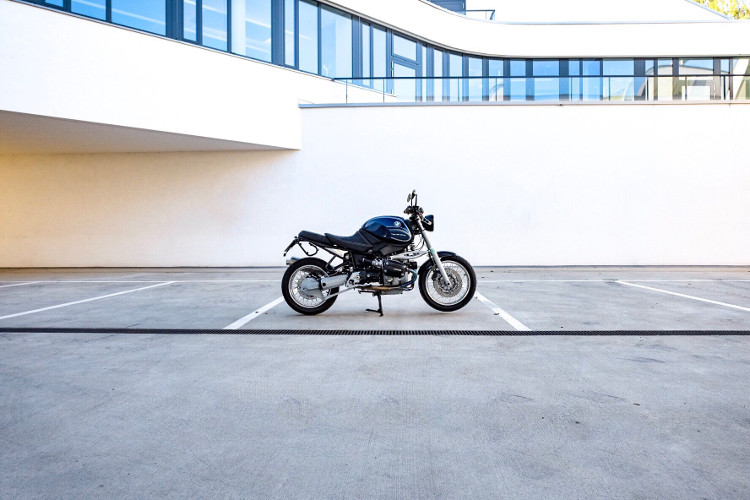 I started to look around for some 2 cylinders (inline four was never my story). After a test ride with a Harley Sportster I ended up at BMW, as I still wanted to enjoy the many nice mountain roads in my home area. After testing all kinds of Monolever, Paralever, Airhead, Oilhead, GS, Roadster, the R1100R with wire-spoke wheels was my choice to its excellent suspension and great engine.

Unfortunately the spoke wheel version was built only a few years. Although in 2015 the prices for Oilheads were still low, It was not easy to get a spoke wheel donor in decent shape. The BMW R1100R was from 1995 had 66TKM on the clock but was a daily commuter (with fairing and suitcases) and quite not maintained very well. At this point in the process, the virus was back and the Oilhead was already more in the direction of “real motorcycle” than “old timer restoration.” 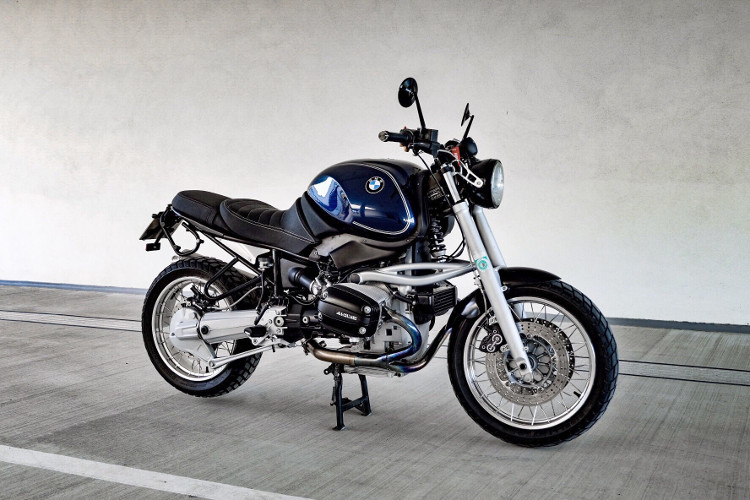 The ’95 R1100R was a superb touring bike with great usability — but super ugly. After removing the windshield, hand protectors and suitcases, the biggest challenge was to fit the new seat to close the gap between fuel tank & seat as the tank has an very uncommon shape. A normal seatpan / seat conversion would not fit, so I decided to chop the driver & rear seat and reshape it with a heat gun to match the shortened rear frame. The advantage of the solution is, that the full functionality remains. You can still open the seat via a hidden cable release mechanism to store small items or reach the fuse box and store the toolkit under the rear seat. The next challenge was to get rid of the original cast aluminium handlebars and replace them with a regular tubular handlebar. The solution was easily found when I researched the BMW spare parts database and discovered that the upper fork bridge of the R1150R should fit because the connection parts (e.g. fork legs) where used in both models the same.

The key to a street legal conversion (which was a must) was to get in contact with a local civil engineer (https://www.engineer4u.at) who could consult me in legal issues and also supported the process with authorities. Effort and costs are really reasonable and you could not imagine what is possible if you have the right consultancy.

So I also shortened the wheelbase for about 2 cm using the GS telelever-link to lift the rear and improve the cornering. Wilbers suspension was also on the list on the way to “real motorcycle.” Side stand is also from the GS but shortened about 2 cm as the original side stand was to short now. The ugly 90s cockpit was replaced by a single Acewell Speedo and the indicators with LEDs. Motogadget M-Blaze Discs on the front. Rizoma Plate holder with LED light at the rear. The 2 ugly oil-coolers had to go under the telelever, replace by an R1100S oil-cooler on handmade mounts. The telelever itself was also replaced with the more beautiful R1150R telelever thanks to spare part database research and my friends from civil engineer office. As the project was all about learning, I kept the original headlight but I fabricated the headlight mounts 3 times. From simple aluminium profiles to more sophisticated ones handmade during long evenings. For final version I use free CAD software to draw them and then send them to an online lasercutter – also a very nice learning and not as complicated and expensive as expected. As the original plastic covers did not fit the frame anymore, new covers were needed. The side covers are made from 2 mm aluminium – learning again – as they had to have a 3D shape to meet the frame. To weld the mounting brackets to the frame needed only a little bit of freshen up my welding skills from my mechanical engineering roots. As the oilhead-engine is far strong enough (80HP) it did not need any major improvement. Just a little bit of attention to improve the flow for top end. K&N Airfilter + Sebring Titanium + matching mapping. The exhaust is also the right choice to meet exact 98 DBA mentioned in the official documents 😉 Low end torque and smooth running was improved with R1200R fuel injectors and exact throttle synchronization. As the rims were in bad condition and BMW tubeless wire spoke wheels are a totally different game, this was one step, I had to admit to need a professional. So I sent them to a German expert to replace the spokes with brand new stainless ones. I did the paint job by myself (front fender, fork bridge, headlight bucket, rear frame, side and main stand) with one exception. The Fuel Tank was done by well-known NCT Motorcycles as they are just 10km far from my home. The also recommended not to go for bare metal with clear coat, as I wanted, because you cannot make 100% sure that water will not go under the coating and create rust. the rust will come through. So we decided to go for an original BMW color. The color is Biarritz-Blue original used by BMW e.g. for the R1200R with silver lines. The upholstery was done by Thomas Tuschek, a local upholsterer, who also works with old-timer cars and boats.

At the end of the day, the weight was reduced by nearly 20 Kg mostly caused by the exhaust, cast bars, instruments & holder and body parts ending up at approx. 180 kg dry weight.

Combined with the torque, the low center of gravity, crank and driving shaft in driving direction, a shorter wheelbase, the telelever and a fine adjusted wilbers suspension it is exactly the right choice of weapon for Austrian mountain roads with its curves and switchbacks – greatest fun. The grip of the Pirellis is surprisingly good. Unfortunately they might not have been designed for 80+ HP and 100NM of torque on the rear wheel. Rear tire has to be replaced each 3000km. Next season I will change them for road tires. But what makes me most happy: Even after changing nearly everything on the bike it is still super reliable and you can ride it comfortable the whole day.

I has now 10,000 Kilometers on the clock, including 1 and 2 day trips, I had only on single incident. The ignition sensor quit his job after two days in the dolomites – fortunately only 500 m from my home – acceptable and really fair from an old lady 🙂 And not bad for an amateur. (By the way: Noah’s Ark was built by amateurs – Titanic by professionals.) So for me the perfect bike. Very cool go for a coffee in the city, very nice for cruising around Lake Wörthersee and reliable as daily commuter and for a few days touring. But still a free breathing oilhead – if you twist the throttle also very serious performance on the mountain roads. I cannot help but it reminds me a little bit on Dr. Jekyll & Mr. Hyde.

The only problem with the project is – it is finished 🙂 So it might be the case, that there will be a new project soon – some ideas around a R1200R are already evolving….