For MI: 6, Cruise is back in the saddle of a BMW motorcycle. This time, it’s a BMW R nineT — a retro-styled roadster that BMW Motorrad calls a “blank canvas for customizing.” Introduced in 2014, the R nineT has a number a beautiful “oilhead” engine, which is arguably more aesthetically pleasing than a more modern liquid-cooled engine. 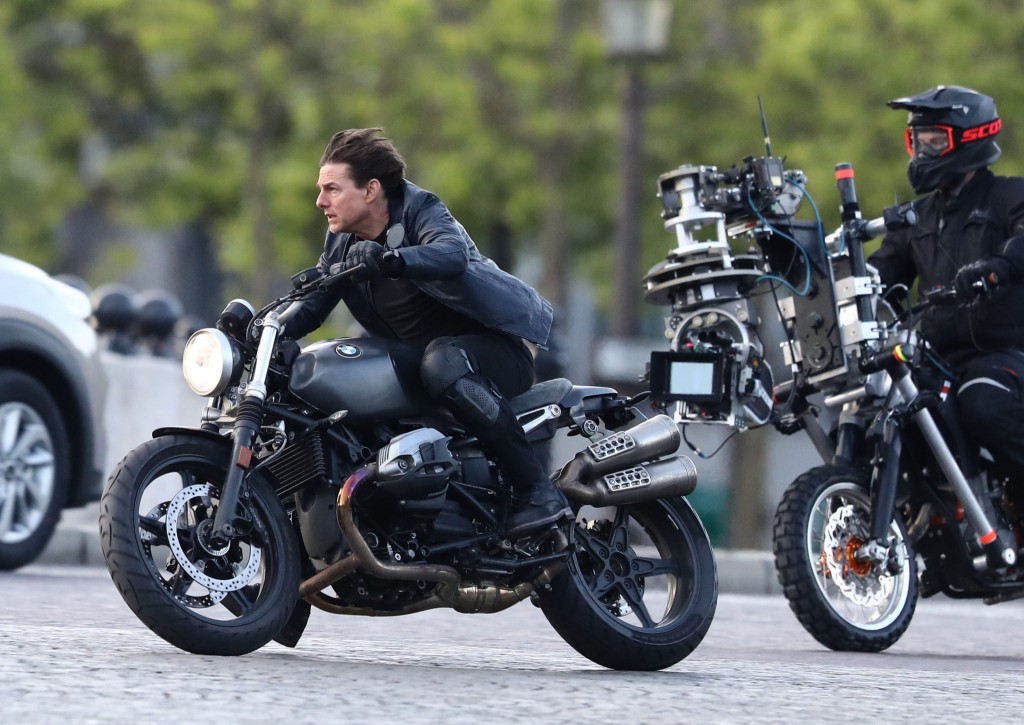 This 1170cc air/oil-cooled boxer twin engine offers 110 horsepower and a stump-pulling 86 ft-lb of torque. To aid with customization, the bike has a separate engine and chassis wiring harnesses, as well as minimal fasteners connecting the seat, headlight, and tail light assemblies. We have featured a number of R nineT customs here from builders across the globe — including cafe racer, scrambler, and streetfighter style builds. Some observers have claimed that the motorcycle Cruise rides is an R nineT Pure — a basic version of the platform — probably because of the tank color. However, closer inspection reveals that the bike has the fork gaiters/bellows, high-mount exhaust, toothed footpegs, and solo saddle of the BMW R nineT Scrambler version. That said, these could be additions to the Pure platform. Either way, the bike has the design cues of the Scrambler. Main features of the R nineT Scrambler include:

The R nineT Scrambler does not have the gold anodized upside down forks of some of the other models. Cruise is known for doing most of his own stunts. While filming in Paris in the fall of 2017, the actor suffered a horrific ankle injury. Believe it or not, the filmmakers were able to use the very scene where Cruise was injured in the final version of the film! You can see it at the 3:00 mark of this interview on the Graham Norton Show!

What’s more, there are photos of Tom Cruise on an unidentified stunt bike that is not an R nineT, but perhaps a customized version of one of the BMW F Series enduros.

Here’s behind-the-scenes look at Cruise back on the R NineT, shooting down through a tube station and back up the other side — as video by some locals on the scene!

And here’s a photo of Cruise emerging from the subway on the R nineT — with a little air under his rear tire!

Below, you can see much of the motorcycle in Mission: Impossible 6, with Tom Cruise weaving helmetless between traffic on his BMW R nineT before broadsiding a Peugeot after an ill-timed, over-the-shoulder rearward look. The partnership not only involves supplying the actual cars and bikes for the films, but important technical support to modify them for stunt work.