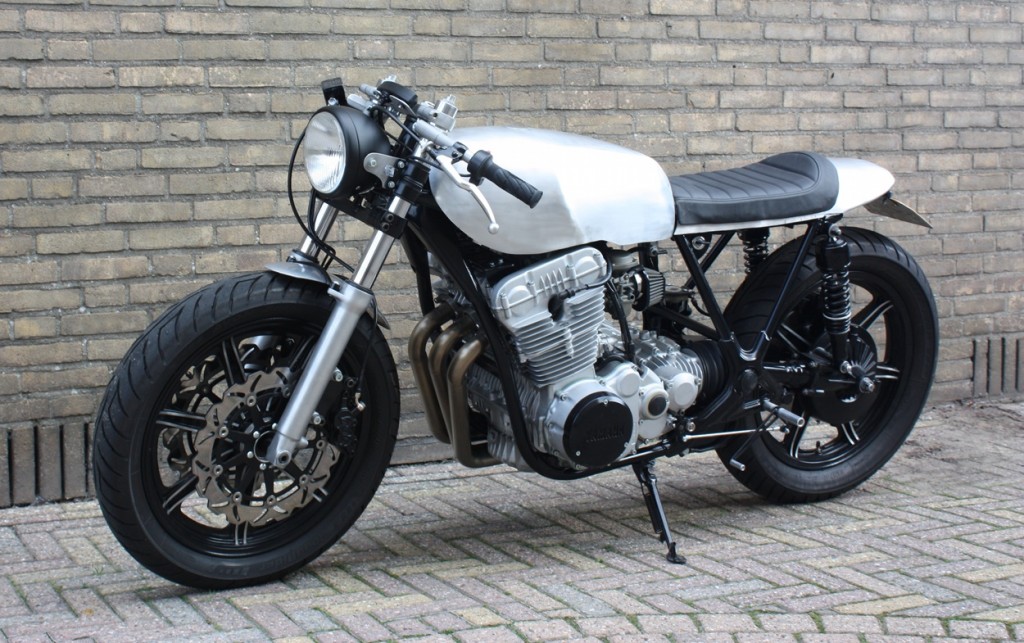 The Yamaha XS750 was a well-balanced, 67-hp Triple whose “exhaust note alone is worth the price of admission,” said Cycle World. The bike is one of our favorite candidates for cafe racer versions, owing to the sleek lines, knee-indented tank, and triple-cylinder song.

Enter Riko Loos of the Netherlands, a software developer who says he enjoys working on bikes even more than riding them. He has done an incredible job with this ’79 XS750, which he bought as a rusted non-runner and rebuilt from the ground up, transforming the bike into a sleek cafe racer with upgraded brakes, suspension, electronics, exhaust, and bespoke aluminum bodywork. The XS750 sound has been described as “distinctive as that of a Porsche flat 6” — we can only imagine what it sounds like through those custom stainless headers and Supertrapp silencer! Below, we get the full story on the build! I am a software developer who likes to spend my spare time in my shed. So I am a hobby wrencher who likes motorcycles. It started by fixing my moped when I was 16. Uhm….fixing most of the time it wasn’t broken, but when I was done it was riding faster.

Motorcycles are easy to work on and I like to do everything myself. Sometimes this is very frustrating if it does not go as planned, but after a few tries I’m mostly happy with the result. I like working on bikes better than riding.

At the moment I have four other bikes, three projects that wait for a rebuild of restoration and a 1974 Suzuki T500 2 stroke that I ride often.

When I bought the bike it was already turned in a cafe racer, but in very poor condition. A non-runner with a lot of rust. So i pulled it apart and start from the ground up.

First I swapped the original front-end with one from a Suzuki GSX-R750, which fits surprisingly well. A combination of the bearings of both bikes and a spacer was enough to make it fit. Because I want to make the front of the bike lower I fitted an 18-inch front wheel from a Yamaha XS400. With a couple of spacers the big brakes discs were fitted so the bike can brake like never before. Now that the XS had front and back 18-inch wheels, I could use the Avon Roadriders for the sporty look I want. The front tyre is an 18*110 and in the back there is a 18*130. The swingarm is modified to fit the wide 130 tyre. The engine and carburetors are rebuilt, nothing special, no tuning. When the big heavy engine was open, I painted the parts with a fresh layer of heat-resistant paint so that it looks good again.

The old wire loom is replaced with a new custom one. A nice digital Koso meter on the dash replaced the bike round meters. I searched for some nice rear sets but could not find them, so these are also made by me. I made an aluminum seat cowl before so I made one again for the XS. The front fender is also from aluminum and also custom made. I never build a gastank before and first I want to use the original tank. But it has a lot of dents and I hate painting a tank. So i went for it and built a gas tank. It took a while and I learned a lot from it, specially how I had thing done an other way. But I think the result is great. The tank has the looks and the same size as the original one, only it sits lower on the frame in the front. Now everything was shiny and new on the Yamaha except the exhaust. Painting the original black was not option and a new chrome exhaust doesn’t fit the bike. So i bought a Supertrapp silencer and made 3 new stainless headers, the collector is re-used from the original exhaust. The XS750 rides great and steers and stops fantastic and that sound of the 3 cylinder out of the Supertrapp is awesome. At the moment the xs is for sale, because it’s time for a new project.