A “BIG-ASS scrambler” in love with the Dutch gravel!

The Honda GL1000 Goldwing may seem like an unlikely candidate for customization, but builders are revealing the burly beauty of these highway cruisers when they strip them down and lean them out. The original GL1000, introduced in 1974,  offered 80 horsepower and 63 lb-ft of torque from its 999cc liquid-cooled flat-four. Cycle magazine called the bike “brilliantly focused” and “Superbike fast,” recording a quarter-mile time of 12.92 seconds at 104.52 mph — only the mighty Kawasaki Z1 was faster that year! Enter Roy Holtman of RH Motorcycles — aka “AREAGE” — based in the Netherlands. Roy has a deep affinity for custom Goldwings — so deep, in fact, that he’s developed a line of GL1000 customs known as the AREAGE “Gravel Express” series. Each bike is custom-tailored to the client, but shares in the overarching concept. Says Roy:

“An adventurous mile-muncher, scrambler-style custom bike, with a bit of a Mad Max thrown in. A rugged legend rides again!” Below, we get the full story on this “BIG-ASS scrambler” from Roy himself, as well as some killer photos from Dutch moto photographer Mark Meisner. My name is Roy Holtman, the one-man-show behind the AREAGE motorcycle studio. RH ‘AREAGE’ Motorcycles in Arnhem, the Netherlands.

It all started for fun in my living room, with a workshop set up behind my couch. From there I moved to a storage shack and it went from there. At this moment I run a professional motorcycle design studio/atelier, specializing in handbuilt, one-off bespoke, custom motorcycles, parts, and lifestyle.

The signature “ARE AGE” brand logo is a self-deprecating reference to the Dutch accent when pronouncing the initials of my name. This idea was born during my college years, over some beers while thinking about a brand-name for a little skateboard company I was playing around with. I have built multiple GL1000’s, every single one unique but based upon the same concept. These custom bespoke bikes are designed for a specific client/owner on the gravel express concept. An adventurous mile-muncher scrambler style custom bike, with a bit of a mad-max style thrown in. A rugged legend rides again!

The client in this case saw the original bike and loved it. Except for him it was a bit too rugged. At the end, we ended
up making a clean and more elegant version of the original. Lets say; more for the gentleman riding to his office at the
end of a gravel road kind of style. This is a custom motorcycle series, all unique in appearance, designed for each specific client/owner upon the same
concept. Custom painted tank, with the speedo in the top cover and with the AREAGE logo on the sides. Overhauled engine and new gloss powdercoat for a “refined” look. Complete custom stainless steel exhaust system by our friends at The Custom Factory. Leather electrical box on the side. And loads of other new small parts.

An adventurous mile-muncher in love the Dutch gravel. A BIG-ASS scrambler. 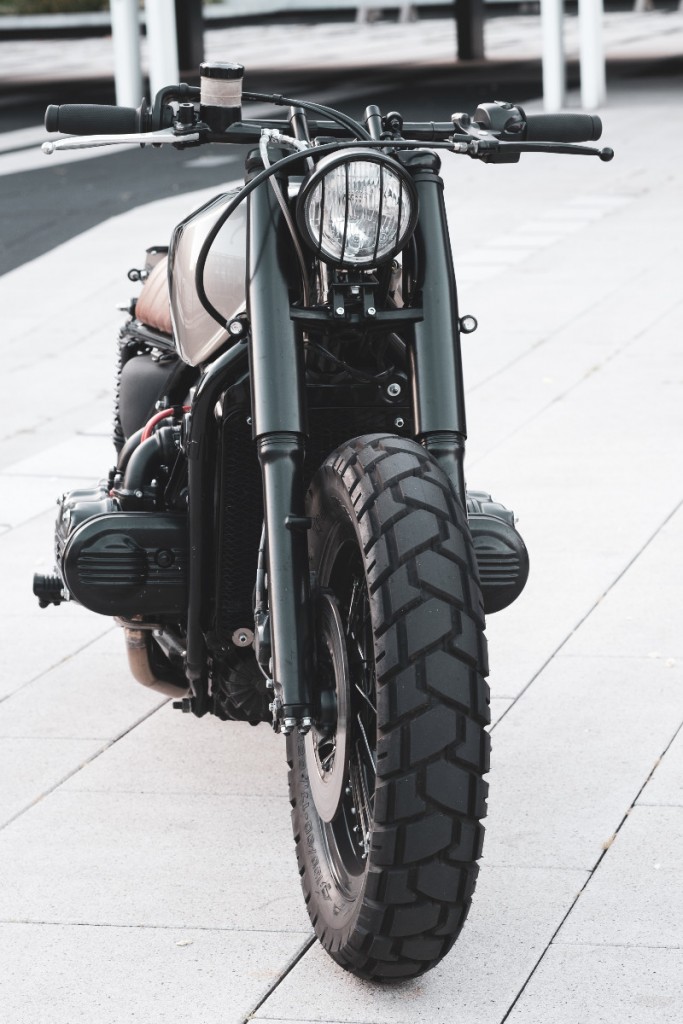 Seeing the excitement in the owners eyes the first time when he saw the completed project while picking up the bike at the studio in Arnhem. And making the right judgment on personal changes to the concept for this specific client.