Built a stone’s throw from where the turbojet engine was invented!

Introduced in 1969 as the XS-1, the Yamaha XS650 would boast one of the most advanced engines of the class, a 654cc parallel twin that featured both unit construction and a horizontally split crankcase. None other than King Kenny Roberts himself would demonstrate the 650 twin’s potential on dirt tracks around the country, and the bike remains one of the world’s most beloved Japanese vintage motorcycles. “A stone throw’s away from Frank Whittle’s old workshop where the jet engine was invented.” Richard has been owning and riding motorbikes since the tender age of 13, and he’s been building bikes for customers for over a decade. While it’s the dream of many builders to have people commissioning their work, there’s also the necessity of deferring one’s own vision in favor of what the paying customer wants. For this build, however, Richard got to build the bike he wanted — just for himself:

“This is the bike I’ve being trying to build for some years but customers have their own ideas of what they want, so I finally got to build what I would like to ride.” The donor is a 1971 Yamaha XS-1B — the second model year of what would become the XS650. These early machines were kickstart-only, with a number of small differences from the later models. For instance, XS-1B fork tubes are not currently available, so Richard had to machine his own pair — one of the challenging and rewarding aspects of the project. The list of modifications is extensive, with a lengthened swingarm, scratch-built handlebars, new subframe, custom-built stainless exhaust, stripped and rebuilt engine, and much more. The bike is running a candy-purple CB350 tank and the electronics have even been upgraded to a trick PMA and solid-state CDI setup, enabling the bike to run sans-battery. Below, we get the full details on this Yamaha XS “Fat Brat.” I started owning and riding when I was 13 years old and always had bikes to this day. In 2008, I built my first bike for a customer and it’s progressed since then, I now have a unit in Lutterworth a stone throw’s away from Frank Whittle’s old work shop where the jet engine was invented. This is the bike I’ve being trying to build for some years but customers have their own ideas of what they want, so I finally got to build what I would like to ride. The design thought behind most of our builds is keep it simple. I like to keep original paint schemes but change the colours. The upper and lower yokes (clamps) are from another bike. I machined the lower yoke stem out and replaced it with the XS stem, machined the upper/lower yokes, so the XS forks would fit. You can’t buy XS-1B fork tubes at present so had to make two as the originals where shot. 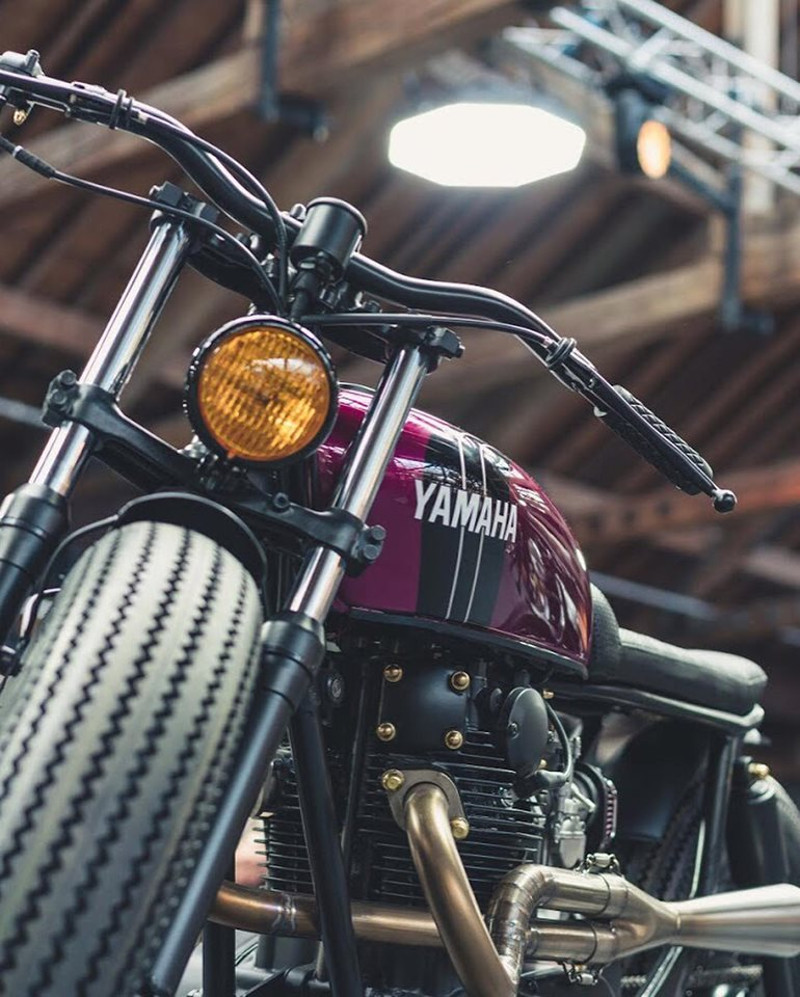 The swing arm has been lengthened by 50mm. I wanted to keep the original Yamaha steering damper and had to make the handlebars to suit. They reduce from 25mm to 22mm — this enabled me to use the original throttle, clutch, and brake lever set up. From the handlebars you have two momentary switches — horn left, high/low beam right switch. The rear sub frame was made 60mm narrower for a better look, new rear suspension mounts. Handmade seat covered in a black using a diamond-cut leather. The fuel tank is from a 1972 Honda CB350K2, dipped in acid to remove all paint and any rust from the inside, then painted in a candy purple. The bikes electrics have been completely upgraded using a Vape PMA electronics package with solid state CDI, running battery-less. The engine was stripped and inspected, all gaskets, O-rings & seals changed for new, then soda-basted and steam-cleaned ready for paint. New carbs, inlets & filters. I made the exhaust system using 304L stainless steel. All control cables made shorter to fit the bike. Brass dome nuts made for the rear suspension, foot hangers, and exhaust.

I’d class it as a Fat Brat. The front end was challenging not being able to purchase fork tubes and had to make them for the first time.