This year marks the 30th anniversary of the Suzuki DR650, which has been in continuous production since 1990, earning a reputation as one of the most rugged, versatile dual-sport machines in history. The DR650RSE, introduced in 1991, offered a touring fairing, electric starter, and automatic decompression system. In these early bikes, the engine was more powerful than later models, making 46 horsepower at 6800 rpm — good for a 13.8 second quarter-mile and 103 mph top speed.

Enter Roy Holtman, owner of custom motorcycle design studio AreAge, also known as RH Motorcycles — located in the Netherlands. With an education in art and design, and a lifelong passion for two-wheeled machines, Roy has an affinity for rugged, adventure-oriented builds:

“These bikes are built with an eye for detail and technical support for the true venturer.” Previously, we featured Roy’s “MT660” Scrambler, inspired by the legendary XT500, and his Suzuki DR500 “Surf Tracker” — one of his early personal builds. Today, we’re thrilled to feature this ’92 Suzuki DR650RSE, built for his friend and client, Ramon — a professional surfer and snowboarder:

“I met Ramon during a surf trip, this dude loves to surf, snowboard and ride bikes as much as I do… Having the same passions it was an honor to get the chance to combine all this in a bike that would fit his adventures! The perfect bike for this young dude born in the 90’s.” As fate would have it, when Ramon first called about a bike, Roy was already sketching out the design for a 90s rally edition Suzuki — the perfect adventure machine for Ramon’s lifestyle.  He was sold! Ramon was still in the middle of his snowboard season deep in the Austrian Alps, so the plan was to have the bike done at the start of spring. Roy was able to customize the machine without any major changes to the rolling chassis. Instead, most parts were fabricated to fit the OEM frame and/or fairing, and some were even reshaped from the original parts. While most of the work was done in-house, some details were outsourced to specialists to ensure quality. The upholstery was done by Miller Kustom Uphostery, and powdercoating by Custom Coatings Hellvoirt. We love that Roy chose to reuse some of the original 90s decals — which, he says, “were already completely RAD!”

But the changes were not just cosmetic. Both Roy and Ramon wished to maximize the DR650’s potential for off-road adventuring:

“An important wish was to transform this bike to a more enduro-capable machine, since the bike clearly has the potential but is originally just not on the same level as a Tenere for example.” The OEM gauges were removed and replaced with a modern digital TrailTech computer. The handlebars were raised and swapped for a set of Rental fatbars, with Polisport hand-guards. The seat has been reshaped and redone with a leather and suede combination for comfort and grip. The rear fender was cut to shape and the subframe shortened. The rims, swingarm and some details were painted or coated black, and a set of Conti TKC-80 tires were mounted. 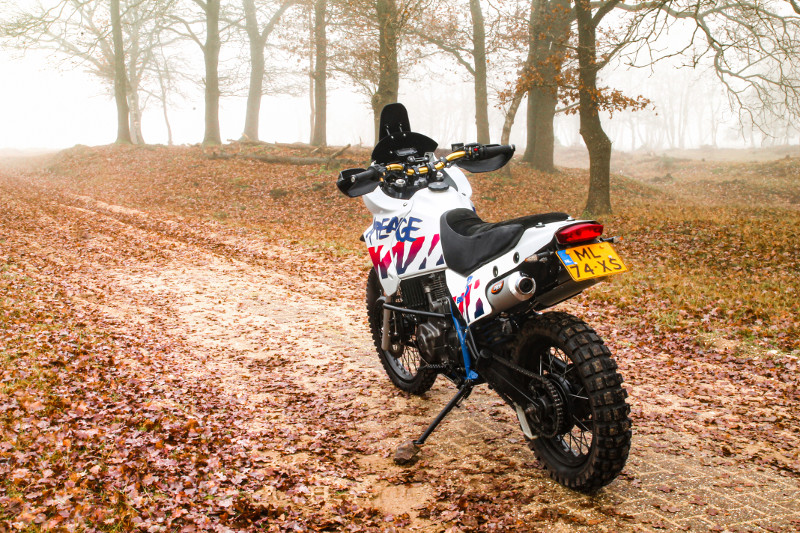 For a little boost in the horsepower department, the original exhaust was swapped for a dual Marving muffler set, along with a TwinAir filter and a DynoJet Stage 2 kit.

Lastly, the original “DR650 RSE” decals were swapped for a custom-made “AREAGE” brand decals. All in all, this is a rally machine that oozes 90s RADNESS. 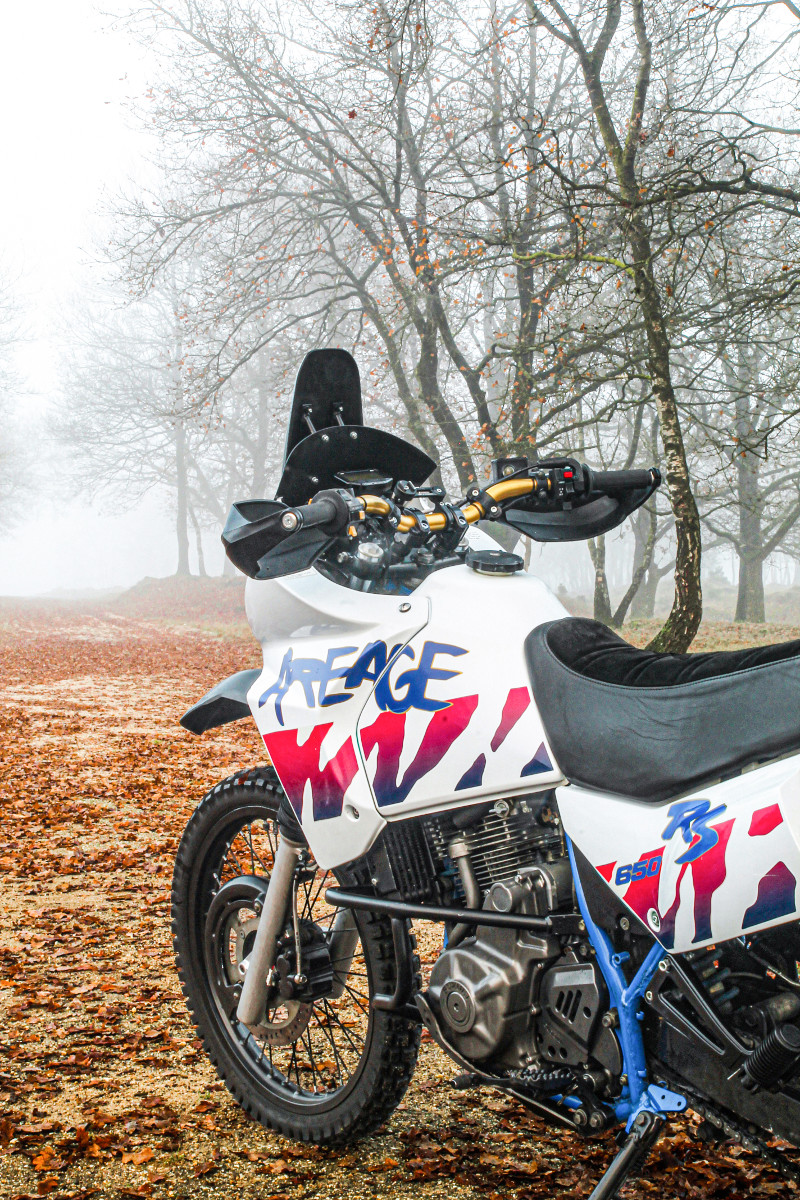