There are builders who model everything in 3D before they ever loosen a single bolt. They have the entire project conceptualized, the materials sourced, the files ready for CAD or 3D-printing. Then there are those builders like our new friend John Aaman of northern Sweden who trudge out to the shop, flick on the lights, set their hands on their hips, and have a hard look at what they have lying around the place:

“I had a set of lawnmower wheels and a spare 125cc engine and thought: what can I build out of these?” John has a long history with garage-engineered machines, building his first chainsaw-powered minibike at 13.

“Since then, I’ve had several custom projects like trikes, cars, minibikes and riding lawnmowers, etc.” Now he’s documenting his builds on Youtube (channel: John Makes), including this turbocharged fat-tire pitbike. The donor frame is a 2014 Orion FX-PRO 125. We don’t know much about these machines, but John says it’s the “cheapest of Chinese pitbikes.” Perfect, ha!

To fit the wide lawnmower wheels, he built a custom swing arm and wider triple clamp. The gas tank is from a Yamaha DT50, the seat a dirt bike saddle sawed in half and re-upholstered, and John fabricated the handlebar from scratch. He rode the bike for two years before realizing it was missing something…boost. For the turbo, John opted for a draw-through setup using a 30mm Powerjet carb mounted directly on a Garrett GT15 turbocharger, peaking at 0.5 bar (7.25 psi) of boost. He’s running a 2.5” exhaust with no muffler:

“The spooling sounds are loud and clear!” 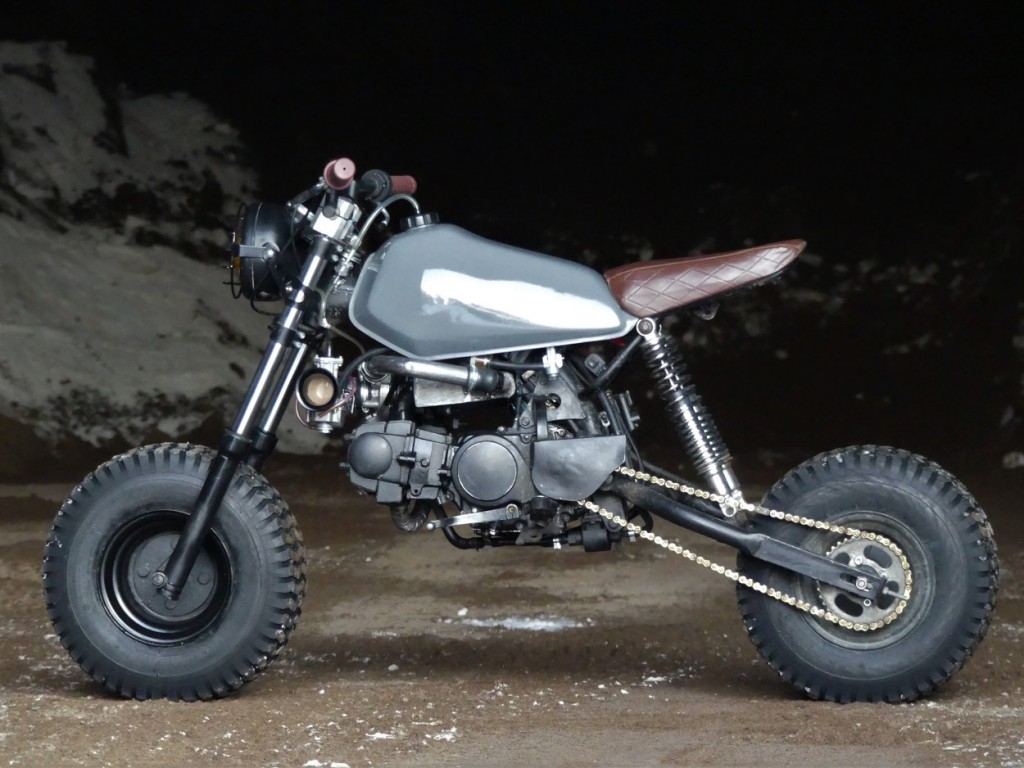 As for the riding experience, John says it’s definitely “unique.” While plenty of people have commented the bike “will only go in a straight line,” that hasn’t been his experience. Plus, as you can see from the video below, performs great on the snow — a big advantage for a resident of northern Sweden!

“The handling is fine, you just gotta get used to the wide and flat tyres carving the ground. The wheels themselves allow for good hillclimbing and it even floats on snowmobile trails in the winter.”

Below, we get the full story on this turbocharged, snow-floating “Thiccbike” — with more photos from @lindblomlinus. My name is John and I live in northern Sweden. I’m 27 years old and I caught my interest in engines when I was about 13. I built my first minibike which was powered by a chainsaw my father gave me. Since then, I’ve had several custom projects like trikes, cars, minibikes and riding lawnmowers, etc. I don’t have much experience in engineering and I don’t have the fanciest tools, but I think my projects always turn out pretty cool. Just a couple of months ago I started a youtube channel called John Makes where I’m documenting my builds from now on. The bike frame was originally a 2014 Orion FX-PRO 125cc. The cheapest of Chinese pitbikes.

It was just time for yet another project. I had a set of lawnmower wheels and a spare 125cc engine and thought: what can I build out of these? I didn’t have a clue what this would turn out as when it started. For a while I thought it would end up like batman’s motorcycle, since the wheels were so wide and squarish. As it came along I realized I wanted a beefy cafe racer look.

Pretty much everything except the frame. I built a custom swing arm and made a wider triple clamp to fit the wide wheels. The gas tank was reused from my old Yamaha DT50, I just repainted it. The seat is actually a dirtbike saddle sawn in half and clothed in diamond stitch faux leather. Traditional cafe racer headlight and handlebar grips. I made the handlebar from scratch. Now for the turbo I added two years after finishing the bike: I went for a draw-through setup using a 30mm powerjet carb mounted directly on the Garrett gt-15 supercharger. The charge pipe then leads to a plenum chamber before entering the inlet of the engine. It peaks at a 0.5 bar of boost! For now I’m running a 2.5” exhaust with no muffler. The spooling sounds are loud and clear! Not officially. Me and my friends call it “the thiccbike” or “Thiccy”.

Driving it is kind of unique. I’ve been getting countless of comments from people saying, “That will only go in a straight line.” But the handling is fine, you just gotta get used to the wide and flat tyres carving the ground. The wheels themselves allow for good hillclimbing and it even floats on snowmobile trails in the winter. There was a fun challenge widening the drive sprocket. It had to be moved out in order for the chain to line up with the wider wheel. I didn’t want an external jackshaft with two chains so I solved it by mounting the sprocket on a splined tube on the shaft supported by a bearing carrier. That came out nice.

Videos of the Build