Daryl Dixon is the longest surviving character of The Walking Dead TV series, an expert tracker and survivalist known for his crossbow and post-apocalyptic CB750 Nighthawk — a custom zombie-hunting machine built by John Ryland and company of Classified Moto. Actor Norman Reedus, an avid motorcyclist, already had a Classified Moto build in his garage, so the Richmond, Virginia-based shop was a natural choice for the job. 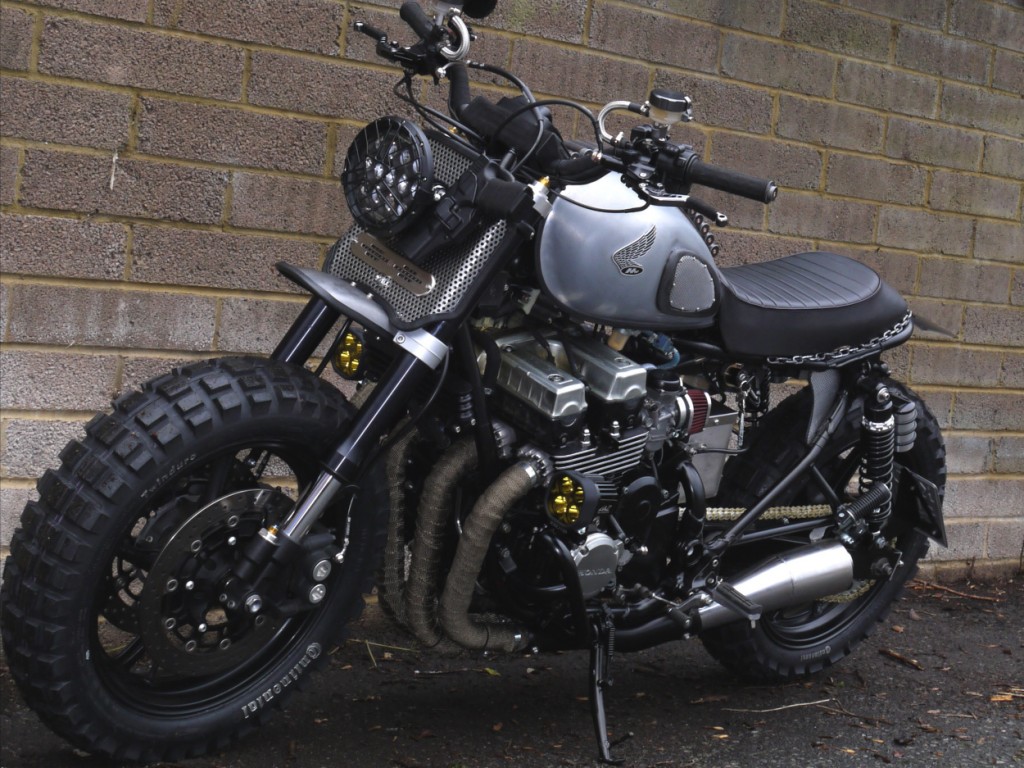 Enter our new friend Louis James of Dorset, England, a 27 year-old tinkerer who got inspired to build a Walking Dead-style CB750 while on a course last year. Louis is no stranger to two wheels — he’s built up a couple of rare Yamaha two-strokes in the past, including a 200cc DT125R and a DT200WR. As soon as he was finished with the course, he picked up a ’92 CB750 frame on Ebay and got to work. He’d never worked on a CB and didn’t even have a manual, but determination and trial-and-error won the day as he slowly assembled his own post-apocalyptic machine.

“It’s made up of so many parts from different bikes. It’s a real Frankenstein of bikes.” The front end is from a Yamaha R1, the carbs from a CBX750, and the engine from a late-model 2008 import with a rare hydraulic clutch. In true Walking Dead / Mad Max fashion, the bike has a L/H Glock holster, a shotgun shell bandolier, and the rear fender is a removable shovel! The bike’s nickname, “Lucille,” is a nod to the barbwire-wrapped baseball bat of another TWD character, Negan. Below, we get more details on the build from Louis himself. I got inspired by Daryl Dixon’s CB750 on The Walking Dead to build this when I was on a course last January. After it was finished, I bought a frame on eBay to start my build. It’s made up of so many parts from different bikes. It’s a real Frankenstein of bikes. Here’s the YouTube video of the original build, I have done a few tweaks since. It sounds beastly!

I am finally getting my full access done in March to ride the 750cc. Been a few delays with the c19 situation. The name “Lucille” is also from The Walking Dead — it’s the name of Negan’s barbed wire wrapped baseball bat… So basically Lucille means Post Apocalyptic Weapon to me. More details on the build itself…

I started this build last spring from just a frame I bought on eBay. I chopped the frame down, welded a seat loop on. Fabrications for the custom fuel tank. Custom seat. I modified the standard exhaust and it sounds beautiful! Yamaha R1 front end. Rebuilt the carbs from a CBX750. Engine was from a late import with hydraulic operated clutch (rare).

As it’s a Walking Dead / Mad Max inspired bike, it’s tooled up for the apocalypse with a Glock with a L/H Holster mounted for quick access while riding. The tank has a shotgun cartridge bandoleer belt. The rear fender is a removable shovel. Took a lot of consideration and thought to get the electrics correct and the bike actually running. Especially considering I’ve never worked on one of these bikes and had no knowledge or even a manual. Just trial and error.