If you’ve been following BikeBound for very long, you’ve probably heard us sing the praises of the Yamaha XT500. It’s hard to believe that the mighty XT was only Yamaha’s second four-stroke motorcycle after the XS650! Introduced in 1976, it was developed in response to Yamaha America’s interest in a bike that could tackle the country’s millions of miles of dirt roads and trails:

“Designed by Shiro Nakamura, in response to market research that suggested American ranchers and off-road enthusiasts were looking for a reliable replacement for the English scramblers they used to buy (BSA had filled this role but had gone out of business).” —Bike-urious There were discussions of developing an oil-cooled, DOHC four-stroke engine, but simplicity won the day, and Yamaha engineers produced a rugged air-cooled engine that harked back to the British 500 singles of yesteryear. It was a dry-sump design — the oil stored in the backbone of the frame — with a two-valve head and chain-driven overhead cam, the cases vertically split but oil-tight. The engine made ~28 rear-wheel horsepower, enough to get the front wheel airborne as much as you like, and the forward-inclined upside-down Kayaba air/oil shocks were a bold step forward, offering about 5.5 inches of travel.

“This model became the pioneer of the big single off-road genre.” —Classic Motorbikes If there any doubts about the XT500’s potential, they evaporated as soon as the bike began tackling the great African rallies:

“The Yamaha XT500 won the first two runnings of the Paris-Dakar Rally as well as the Paris-Abidjan-Nice, it also surprised everyone by winning the 1977 500cc Motocross World Championship (in significantly modified form) against the formerly dominant two-strokes.” —Silodrome Here at BikeBound, we’ve featured a whole stable of custom XT500’s over the years, and Motorelic’s XT500 restomod was one of our most popular builds of 2020. So we decided it was high time we feature one of these machines restored to factory trim — especially when we saw this gorgeous ’81 specimen from our friends at 86 Gear Motorcycles of Warsaw, Poland — builders of the XT600 supermoto we recently featured. Founder Christian Boosen, who grew up in Germany near the Dutch border, has a long and storied history with the XT500:

“During my first bike tour, I spent half of the time fixing my 1981 Yamaha XT500 on the side of the road. It took a long time and a lot of hurdles but I made it to my final destination: Istanbul. I guess that challenge became my defining moment. When I finally made it home I was inclined to do my first complete rebuild. Shortly afterward I started to restore and sell some of these bikes every year. After 10 years of hard work and commitment, my hobby became my main occupation.” When a customer saw this ’81 XT500 sitting in the workshop, he fell in love and asked Christian to restore the bike back to original. The frame was sandblasted and painted, the wheels re-laced, bearings replaced, and the engine completely overhauled and re-painted:

“Everything that showed a sign of wear was exchanged, new piston, camshaft, rockers, etc.”

The carbs were rebuilt and the bike received new tires. All in all, a very tidy restoration that’s sure to have lots of miles and smiles in its future. Says Christian of the riding experience: Below, we get the full details on the restoration and more photos from Bartek Zaranek Photography. Special thanks to Aleksander Ilcewicz of 86 Gear for his help as well. A client saw one of the old XT500’s in my shop and fell in love with it. So he asked me to get it back to original for him. It is a real thumper. Lots of low end torque. Raw and real.

I like that we got it back close to original. 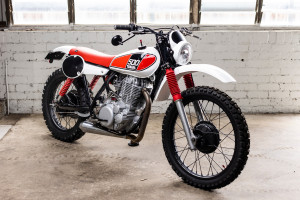 Yamaha “SRXT500” Vinduro by 86 Gear - From Street to Scrambler…  By 1971, BSA and Matchless had both gone out of business, and with them the British 500 singles whose torque and character had proved perfect for such a wide variety of […] Torque Monster: Yamaha HL500 by Se7en Six Collective - “This motor effortlessly lifts the front in 3rd while ploughing 3-inch furrows at the rear…”  The Yamaha HL500 — aka the “Aberg Yamaha” — is one of the most fascinating motocross bikes of the 1970s. […] Queen of Dakar: ZZ Moto’s 1981 Yamaha XT500 Resto - The Yamaha XT500 is one of our favorite bikes of all time. The twin-shock, four-stroke single-cylinder enduro came out in 1976, a street-legal version of the TT500 introduced a year earlier. Yamaha USA had realized […] A Real Thumper: Yamaha XT500 Resto by 86 Gear Motorcycles -   “It is a real thumper. Lots of low end torque. Raw and real.” If you’ve been following BikeBound for very long, you’ve probably heard us sing the praises of the Yamaha XT500. It’s hard […] Yamaha TT500 VMX by Beeton Fabrications - An HL500-inspired vintage motocross racer from Down Under… It may seem hard to believe today, but by the mid-1970s, the four-stroke thumpers that once ruled the dirt were all but dead. Both BSA and Matchless […] 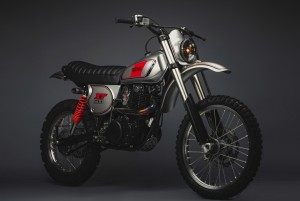 Project X-Tracker: Yamaha XT500 Street Tracker - A BMX-inspired street tracker…with bicycle rack! The Yamaha XT500 is one of motorcycling history’s great success stories, and one of our favorite bikes of all time. The twin-valve four-stroke enduro won the Paris-Dakar Rally in […] Yamaha TT500 Street Tracker by VZMC Customs - A nostalgic trip back to the 70s with an iconic, competition-only TT500… It’s always a thrill to feature the first bike from an upstart builder, particularly when it’s as staggering and well-executed as this Yamaha […] Yamaha XT500 Surf Scrambler by Project Moto - The Yamaha XT500 is one of the great all-around motorcycles ever built. Introduced in 1975, it was the proto-thumper, spawning generations of bulletproof four-stroke big-bore singles that could thread the urban jungle, rip the backroads, […] Yamaha XT500 Supermoto by Random Cycles - The Yamaha XT500 was introduced in 1975, and it quickly rose to supremacy among enduro/adventure bikes, winning African rallies like the Paris-Dakar and Paris-Abidjan-Nice, as well as motos in the 500cc Motocross World Championship.  The […]