The Honda XR600R is the big-bore four-stroke weapon that unseated Kawasaki’s KX500 two-stroke to become the new king of Baja. Over its 15-year production run, the open-class thumper would amass a record of wins in desert racing, hare scrambles, cross country, and enduro competition that few bikes could even hope to rival.

“How many motorcycles can you name that won Baja 1000 races spanning a 12-year period? Not to mention nine off-road championships and dozens of other major off-road events. Only one motorcycle makes the cut: Honda’s mighty XR600R.” 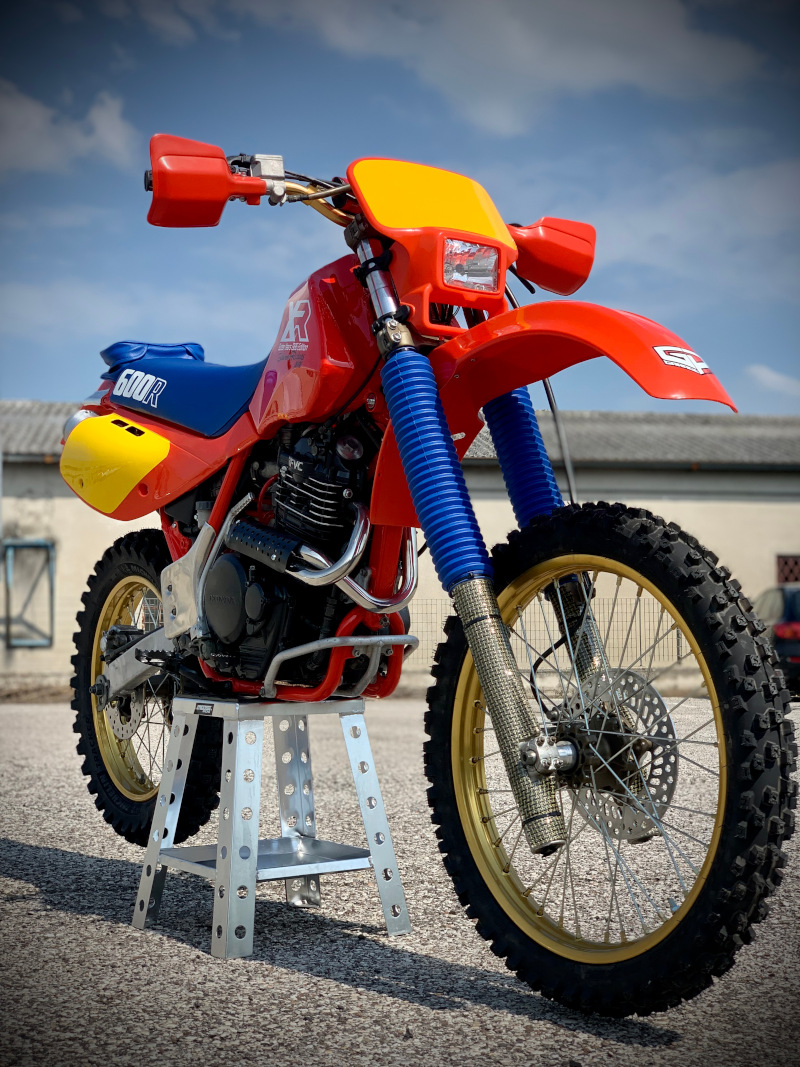 The big XR was built for wide-open desert racing, so no one expected it to perform as well as it did in the tighter woods, mud, and grass track of enduro competition.  But enduro genius Scott Summers would win four AMA Hare Scrambles national championships and five Grand National Cross Country championships on an XR600R, not mention three gold medals in the “Olympics of Motorcycling” — the International Six Days Enduro (ISDE). One builder who knows these big-bore Honda thumpers inside and out is our friend Matteo Gualandi of Italy’s GPgarage Moto. Not only does Matteo, a former motocross racer himself, run a pair of Honda CRFs in the Italian Rally Championship, but he has a great respect and love for the brand’s vintage machines, having built an ’82 Honda XL500R, ’86 XL600LM, and ’95 XR628R Johnny Campbell replica we’ve featured. Now he’s back with this 1994 Honda XR600R “Golden Years Edition,” built with a limited-edition kit from one of his suppliers, Italy’s Extreme Riders, consisting of an alloy tank, seat cover, and set of plastics meant to resemble the iconic flash red, blue, and gold 1985-86 XR600R.

“I was interested in this idea and I thought about how to develop it… In the end I thought I’d build a bike as if it were a factory HRC of the time.” Matteo painted the frame flash red, the engine black, and used a magnesium Cerakote on the hubs and triple clamps. He built the exhaust using a Supertrapp silencer, and installed the tank, plastics, and seat cover from the kit.

“But the bike wasn’t complete…there was a factory appeal missing from the front… I created a mould from a couple of old Acerbis fork covers and did it in kevlar like an ‘80s special part.” The result is one of the sexiest, most nostalgic Honda thumpers we’ve ever seen — an XR600R that looks straight out of the 1980s, ready to blast across Baja ahead of the trophy trucks and buggies. Below, we get the full story on this build straight from Matteo himself, and stayed tuned for a video of his Honda XR628R Johnny Campbell replica in action! One of my suppliers realized a small series of aluminum tank, plastics, and seat cover with the colors of the 1986 series — he asked me to realize an XR600 with this kit. I was interested in this idea and I thought about how to develop it… In the end I thought I’d build a bike as if it were a factory HRC mod of the time. I started by painting the chassis in flash red, the engine in black, and the hubs and the triple clamps in Cerakote magnesium, like the magnesium factory parts. After that, I installed the Golden Years kit and built the exhaust using a Supertrapp silencer. But the bike wasn’t complete…there was a factory appeal missing from the front… I created a mould from a couple of old Acerbis fork covers and did it in kevlar like an ‘80s special part. It’s a standard XR600 with only aesthetic modifications. Yes, the final look… It’s a very simple build.. I’ve many other, more expensive bikes, but this one is one of the most well-liked on social media.