We always love to share the first bike from a young builder, so we were thrilled to hear from 22-year-old Thomas Manno of Mile Zero Racers, who recently finished this 1975 Honda CB750F. From the beginning, Thomas had it in his head that his first cafe racer build had to be one of Honda’s mighty 750 Fours:

“I don’t know why but it was the type of scenario where it’s in your mind and you can’t do anything else but what your mind is laser-focused on.” After picking up a shabby CB750 specimen from Facebook Marketplace in 2020, Thomas got to work. As he was in college at the time, the bike was built during his winter and summer breaks, and it quickly became a learning platform of its own:

“I had to learn how to use tools, acquire the necessary tools to make this build happen, and also learn how to build a motorcycle…” 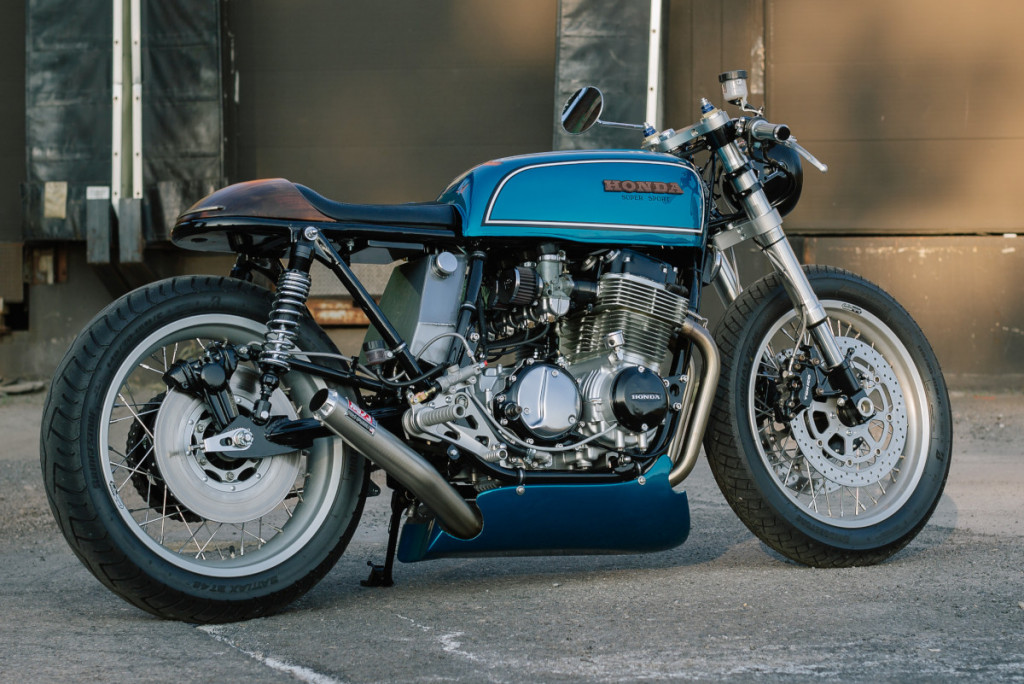 His vision was to retain as much as of the original class and character of the CB750 as possible, while complementing the history of the machine with modern parts that would make sense and tie the build together, giving it a Porsche “ClubSport” vibe. 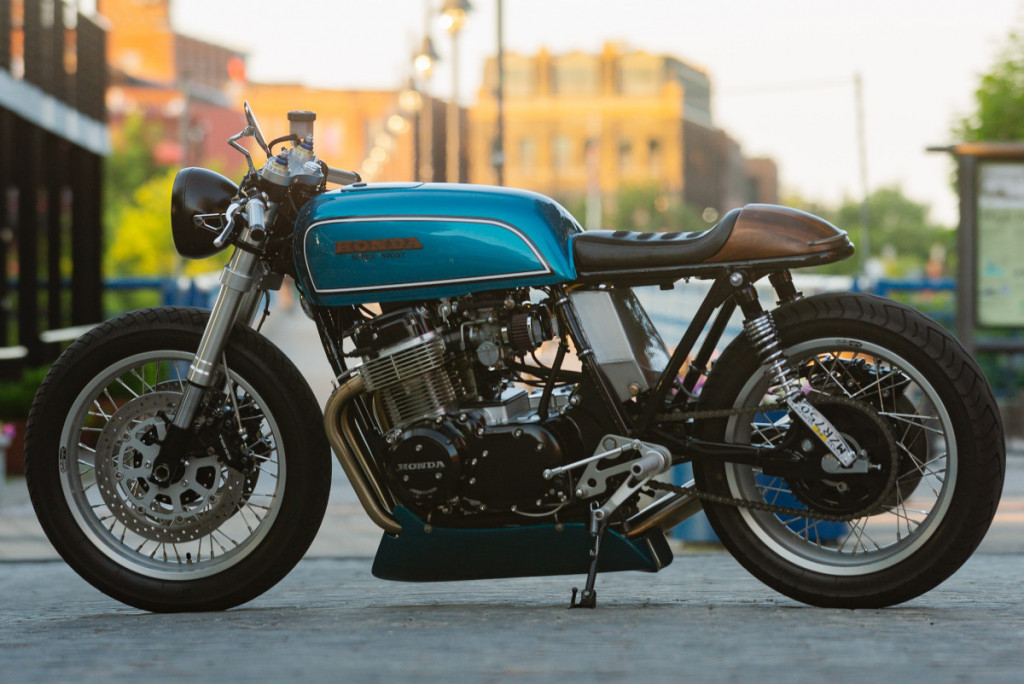 Thomas fully rebuilt the engine with the help of CB legend Mike Rieck and Cycle X — a journey in and of itself, which he details below. Besides the engine, he swapped out the front end for a GSX-R unit, modified the subframe, rewired the bike with a Motogadget unit, and shaped up a belly pan and wooden rear tail section…and much more!

“I built this bike for the pure challenge; to test my abilities and compete with all the top builds. With the end goal to be an inspiration by showing first time builders that they too can build their dream. Hence, Mile Zero Racers…” As for the riding experience, Thomas likes to describe it in terms of the four-wheel world:

“Riding the CB750 in car terms is like driving a BMW 2002 with a freshly rebuilt euro S52 with coilovers, big brakes, and a modern ECU.” Below, we talk to Thomas for more details on the build, as well as more photos from photographer @azarowny. My name is Thomas, I am 22 years old and just finished my first “full build.” I just graduated college and have been building this Honda since May of 2020. That’s two years’ time, but the actual build took about 9-11 months. Winter and summer breaks were the only time slots I had to make progress, which made it very difficult to hold my interest and not forget where I left off. When I was 17 I purchased my first motorcycle. It was a 1987 Suzuki Savage LS650. This bike introduced everything to me. Meaning: bikes in general, cafe racers, bobbers, tools, wrenching, etc. I modified that bike, but it was a chop job and more of a perfect bike to learn it all on. Fast forward some time, and I started sparking an interest in cafe racers, the lines, and overall style. The shop where all the magic happens is in the third garage bay at my childhood home. I started this CB750 build with very little knowledge in the world of wrenching. When I started the Honda build I had a small toolbox with mixed-matched tools that were out of place. So to put it in perspective, I had to learn how to use tools, acquire the necessary tools to make this build happen, and also learn how to build a motorcycle from scratch. I love this question because it is simple. This bike was built to achieve a personal goal of absolutely pushing the boundaries. I told myself that I wouldn’t build a cafe racer unless it was a CB750. I don’t know why but it was the type of scenario where it’s in your mind and you can’t do anything else but what your mind is laser-focused on.

After a lot of time on Facebook Marketplace, I happened to find a 1975 CB750F all original; however, the bike wasn’t in the best shape. Once I bought this bike and the obsessive research began, I soon began to realize how saturated the CB750 cafe racer market was. Probably one of the most overrated bikes to build. After realizing this, I sat back and reflected on how to build this bike to stand out from the rest, and I didn’t stop until it was achieved. I built this bike for the pure challenge; to test my abilities and compete with all the top builds. With the end goal to be an inspiration by showing first time builders that they too can build their dream. Hence, Mile Zero Racers (everybody starts at the first mile, no matter expert or beginner) and Dream it. Build it. (Which is self explanatory.)

To preface the below info, there were two different ideas I wanted to merge:

Concept 1: to retain as much original Honda CB750 as possible. Meaning, don’t lose the glory and history of the CB750. Try to preserve the beauty of the machine because it is arguably one the most influential bikes ever produced.

Concept 2: to perfectly complement the history of the machine with modern parts that make sense and tie it together. Bring a Porsche racing ClubSport vibe into the style, hence the build name “The ClubSport Build.”

Final scheme: mold the two concepts and build a modernized 70’s classic into a style nobody has seen on this particular model. (Wood, belly pan, silver color scheme instead of black.) Mostly everything on this build was custom made. A one of a kind wooden cowl and matching tank badges. The wood was something I’ve never seen on a CB750 and instantly knew that was a crucial aspect to executing the style. I have no background in woodworking, so I made a mold of the shape and size out of florist foam. Fortunately enough, one of my closest friends is a professional woodworker, and he helped execute a wooden cowl of such beauty. Yes, “The ClubSport.” The name pays homage to the homologation specials such as the 190e Evo and the E30 M3. Aside from that, my whole design was built based on the name. ClubSport. Perfect balance of style and performance. Not too sure about the numbers, but everything in the engine has been touched and replaced and given a little more power. The top end is all brand new (valves, springs, valve guides, ported head, 2nd overbore, coated pistons) and brings the engine to just about a true 750cc engine instead of a 736cc. Riding it is a fantastic experience. As we know, this style of riding isn’t the most comfortable; however, it is aggressive as hell with how I positioned everything. The GSX-R front end is definitely overpowering, but it makes the ride so smooth and stable. The riding experience is very raw in a good way but complimented by the few modern parts making for a smooth seamless experience. Riding the CB750 in car terms is like driving a BMW 2002 with a freshly rebuilt euro S52 with coilovers, big brakes, and a modern ECU. Yes, all of it! But, more specifically the engine. The engine process was the type of hurdle that leaves you with two choices: you quit or you persevere. And I’m writing this statement so I guess it’s safe to say i persevered!

The engine process was very intimidating to say the least. I’ve never seen inside an engine before, which was awesome, but when I took the valve cover off the whole right side of the camshaft was shredded. I’m sure you can imagine that mess. At first I thought it would be ok just to do a top end refresh but soon realized the smart and safe decision was to tear apart the whole motor and rebuild it. Prior to making the decision of a full rebuild, I rebuilt the top end three times. There’s a ton to the engine story, but to make a long story short, I sent the top end to Cycle X and the lower end was refreshed by me and also by Mike Rieck who shadowed and coached me through the process. If you don’t know Mike, he is a legend in the Honda CB world. I then received everything back from Cycle X and put the engine back together. When the bike started for the first time it was the greatest sense of accomplishment I have ever felt. This process showed me that I can do anything I put my mind to and really brings the slogan, “dream it. build it.” to life.