In 1976, Yamaha released the next evolution of the two-stroke RD series: the Yamaha RD400. Contrary to popular belief, it was much more than a punched-out RD350:

“With 40bhp and a top speed of 106mph, the RD was launched to capitalise on the success of the RD350 but was a totally new machine. Rather than being over-bored, the 400 had its stroke increased needing new crankcases which required the factory to re-tool in order to produce it.” —Visor Down What’s more, the RD400 had a rubber-mounted engine, new brakes, wheels, suspension, airbox, and more. It quickly became top dog of the middleweight two-strokes, and one of the world’s great hooligan machines:

“It throws itself around in a brash and unseemly manner, shouting for attention. To ride this bike is an event with a race-tuned soundtrack.” —Classic Bike Hub Enter our new friend Cam Smyth, an industrial designer who launched Smyth Innovations in 2012, designing and building custom vehicles. This ’76 RD400 came from a client who wanted a street tracker inspired by the Yamaha flat track machines of the late 1970s — machines like the infamous TZ750:

“We knew we wanted that traditional Yamaha competition yellow paint with the speed blocks, gold wheels, and an aluminum swingarm.” The bike was taken down to the bare frame, detabbed, and mated to a custom-braced and modified IT250 swingarm. The parallel-twin engine was bored to 427cc and fitted with HVC Cycle radial fin performance heads, along with an arsenal of other trick elements detailed below. Cam and the client knew they wanted the bike — though street-legal — to look like a real racer:

“From the beginning, if we were going to build a street tracker it had to look more like a flat track racer than a street bike, and for us that meant completely hiding the headlight and tail light.” Cam says the bike rides as well as it looks — and sounds like a beast:

“The bike feels nimble and more than capable in the corners regardless of the fact that it now sits higher than a stock RD400. And the torque and sound are undeniably addicting.”

Below, we talk to Cam for the full story on this incredible RD. My name is Cam Smyth and I am an Industrial Designer. I got my first dirt bike as a kid and I have been hooked ever since. In 2012 I launched Smyth Innovations and I have been designing and building custom vehicles since. 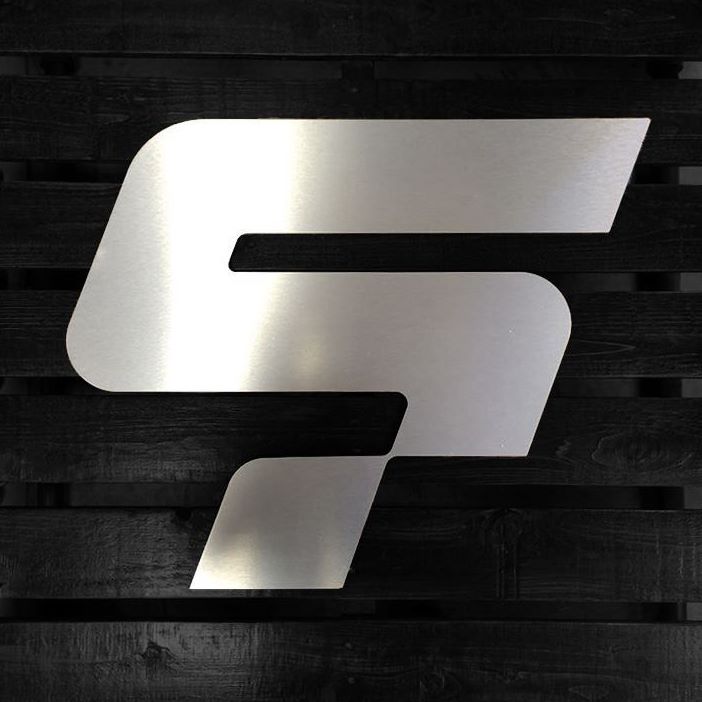 In November we took delivery of four 1976 Yamaha RD400’s that had been acquired by a client. He was looking to have one restored and one modified into a street tracker. After a brief discussion about the projects, we decided with the Roland Sands Design & Geico Motorcycle Dream Build Off on the horizon, building the street tracker for the competition would be a great way to kick it off. On December 1, 2021 we started the dream build off with a 1976 Yamaha RD400 that needed a lot of work to be roadworthy again.

The design was inspired by the classic Yamaha flat track competition bikes of the late 1970’s. We knew we wanted that traditional Yamaha competition yellow paint with the speed blocks, gold wheels, and an aluminum swingarm.

1976 Yamaha RD400 frame was cleaned up and we removed almost all of the stock mounts. The stock seat section was cut off and a new one was fabricated along with lower supports to mimic the shape of the stock RD400 side covers. New gussets and other brackets were made to suit. Modified Kawasaki ZX 14 foot pegs. 1976 Yamaha RD400 engine was taken down to the bare cases, blasted, powder-coated, and completely rebuilt. All new seals, gaskets, crank was replaced, and cylinders were bored out. We mounted up a set of HVC Cycle radial fin performance heads and did a number of other performance and aesthetic engine modifications. We cleaned up all the factory flash and shaved all the cast writing on the engine covers. Added a hydraulic clutch setup and modified the sprocket cover to open it up and expose the mechanical beauty. Pulled the old electrical and plugged in a new VAPE CDI ignition kit. We swapped the stock intakes out for a couple of aftermarket large Banshee intakes, ported the intake and exhaust to match, and added V-Force 3 Reed valves, fed by dual Mikuni TM-32’s. The exhaust was built from two sets of vintage DG expansion chambers giving the bike a touch of vintage performance in a slightly different orientation than most are use to. From the beginning, if we were going to build a street tracker it had to look more like a flat track racer than a street bike, and for us that meant completely hiding the headlight and tail light. On the front end we mounted up twin 6″ LED light bars and angled them for high and low beam. Next we hand-formed smoked acrylic plastic sheet to get a nice tight fit to the forks and made up custom mounting brackets with quick release hardware giving us a functional front number plate and headlight cover. On the tail end we cut and formed a panel from that same smoked acrylic plastic to slide in and lock in place covering the tail light from the rear. A new wiring harness was built from scratch to suit the build. 20mm LED buttons were mounted and installed in the handlebars. Koso DB-01RN gauge cluster was mounted up top and a Koso Hawkeye LED tail light was tucked up under the tail. All powered by an Anti Gravity AG-401. We swapped out the stock front end for a set of 2006 Suzuki GSX-R600 inverted forks and lower triple. We modified an LSL top triple by shaving the ignition mount, trimming the backside, creating more clearance for the RD400 tank, and adding mounting to accept the Koso gauge cluster. The GSXR fork lowers were modified to work with a set of KTM forks guards to help give the bike that track-ready look. The bars are fitted with Brembo clutch master and front brake master, modified Brembo levers, and Renthal street grips. We knew we wanted an aluminum swingarm to help give the bike that vintage trick look, and to make the bike look right on 19″ wheels, we needed to add a couple inches to the length. With that we sourced a swingarm from a 1981 Yamaha IT250. Removed the old stock mono shock mounting, cut out all the excess, internally braced it and built it back up with a new lower mount to fit our application. The IT250 end blocks were crude and worn, so we designed and machined new end blocks and counter-bored the chain adjustments blocks for the rear axle shaft and nut to create a more streamlined look and user-friendly chain adjustment setup. Then we braced the swingarm to add strength and style to make it resemble the YZ465 swingarm. 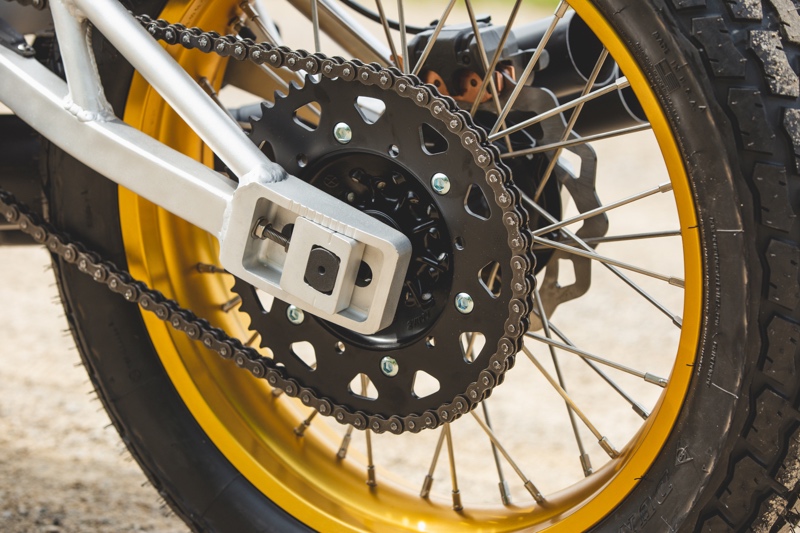 Early in the competition, we were selected as the winners of the @RideDunlop Design Challenge and chose a set of K180 street/dirt track tires for the build. With the tires set, we went ahead with a pair of gold Sun Rims and stainless steel spokes supplied by Buchanan’s Spoke & Rim Inc. Keeping with the flat track style build, we wanted small hubs and discs. We opted for a 1986 YZ250 front hub and a 1990 YZ250 rear hub, matching Galfer wave rotors and Kawasaki Ninja 300R calipers with Galfer pads all fed via custom Galfer lines. Front and rear axles, swingarm pivot, and top nut were all custom-made with matching 5 pin sockets for safety, security, and to enhance the aethetics. Starting from a factory RD400 gas tank, we removed the rear mounts and the front crossover tube outlets and welded them up along with the factory fuel valve mount. Next we cut out the gas cap fill neck and replaced it with a Kawasaki Ninja 650 so we could run a modern Vortex flush mount gas cap. Then we drilled and tapped a couple 1/4 holes on the underside for the new fuel line mounts and welded up a new adjustable rear mount so we could get the tank angle just right. The new fuel valve is hidden on the inside of the frame just behind the carbs and yet it is still easily accessible even while riding. The gas tank is painted in 2006 Yamaha 50th Anniversary yellow pearl. A modern take on the traditional Yamaha competition yellow. 427 Tracker, derived from its big bore powerplant and its inspiration from flat trackers. Nothing at this time, although we do hope to get it in for a dyno run and a few laps around the local track. The bike feels nimble and more than capable in the corners regardless of the fact that it now sits higher than a stock RD400. And the torque and sound are undeniably addicting. From the onset of the project, if we were going to build a street tracker, it had to look more like a flat tracker than a street bike. That meant hiding the lights and other features where possible. No big clunky gauges, minimal brakes, right side dual exhaust, and an overall race inspired look.