Introduced in 1987, the BMW K100 was quite unlike any motorcycle BMW Motorrad had ever produced — or any other company, for that matter. At the time, BMW’s bread-and-butter boxer twins were outdated, and the company’s reputation for producing superior, premium-priced motorcycles was wearing thin.  They were losing market share and sales at an alarming rate. BMW needed a modern, liquid-cooled, clean-burning four-cylinder motorcycle to compete with the Japanese manufacturers, and they leaned hard on their automotive expertise to help produce it. In fact, the first prototype utilized a Renault X-Type engine from a Peugeot 104! That gave them a successful proof of concept for the layout:  an inline four-cylinder engine laid on its side in the frame, with the valve covers on one side and the crankcase on the other — a unique visual that led to the K bike’s well-known nickname, the “Flying Brick.” Some of the same engineers who’d worked on BMW’s Formula Two race engine were enlisted to design, develop, and test the 987cc, 90-hp engine for the K100.  It used Bosch Jetronic fuel injection like the BMW 3-series cars of the era, and featured a breaker-less electronic ignition system. It’s a testament to the K100’s engineering that many of these bikes are still in service 35 years after their introduction:

“They were very well made and the second hand values are still relatively low. It’s a bike that’s built to last and is arguably more reliable than the Japanese bikes of a similar age.” —BSK SpeedWorks via MCN 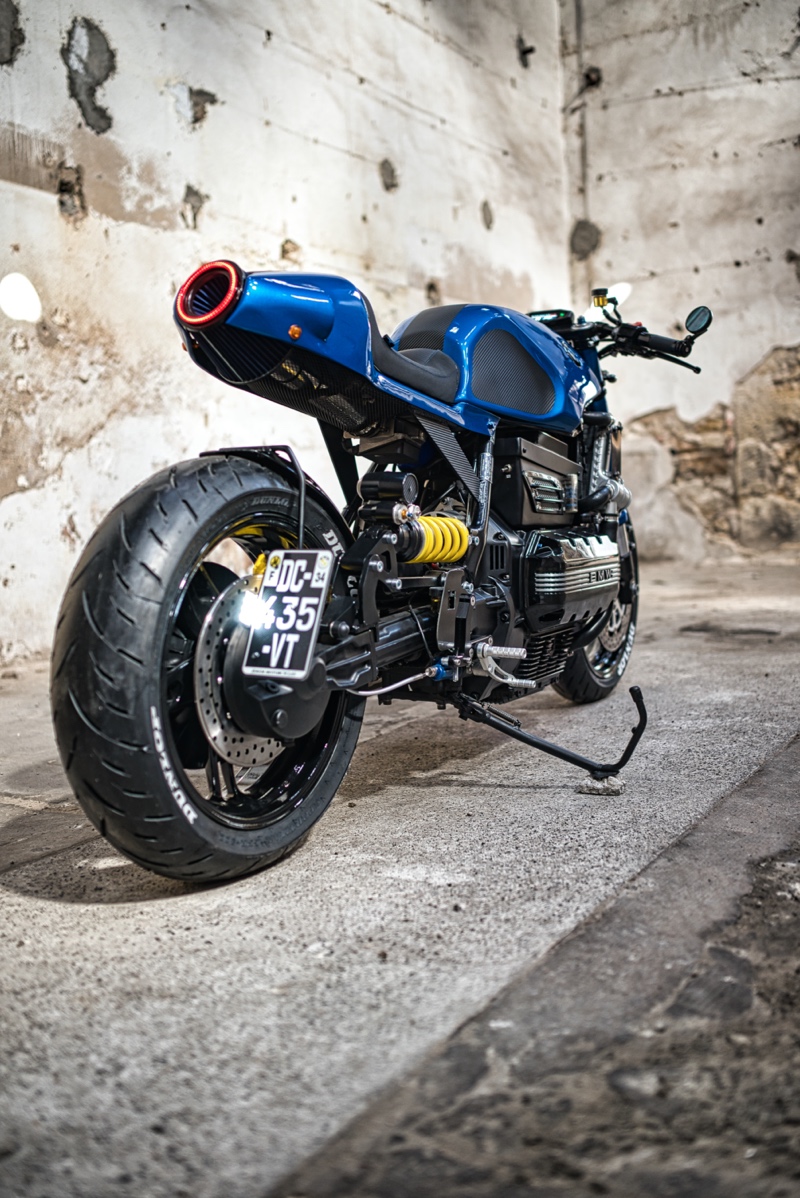 While the original machines were autobahn cruise missiles with full fairings, modern K100 customizers have been stripping them down and turning them into Bavarian hot rods. This one comes to us from our friend Jérémie Duchampt of France’s Jerem Motorcycles, and it’s loaded with details. One of the signature aspects of the build is the air intake, which has been relocated to the tail! A custom stainless steel intake pipe runs under the seat to the air flow meter, while an LED taillight has been integrated into the air filter itself! The result looks something like a jet afterburner, complete with air intake scoops, so it’s no surprise that Jérémie nicknamed the bike “Top Gun.” The suspension and brakes have also been updated.  The bike is now running inverted forks and brakes from a Suzuki TL1000S, with a Yamaha R1 rear shock mounted horizontally via a custom-made mounting system — a modification we’ve seen on several of these bikes lately. The front wheel is from a GSX-R, while the rear comes from a BMW K1200GT.

Jérémie also relocated the side stand to the right side of the bike, as the original location let oil seep past the rings, causing the bikes to smoke at startup. All of the lighting has been updated to LED, a custom fiberglass undertank box holds the electronics, and the bike now boasts a TENET management box and keyless start system with remote control. It even has a nifty illuminated BMW lower engine logo. The engine, frame, wheels, and swingarm were all painted in a satin black epoxy, while the bodywork is finished in Renault’s iconic Alpine blue — a hue with quite the history. All in all, this one stunning ‘Brick, well deserving of the name “Top Gun.”