The Suzuki GW250 is an entry-level twin with a liquid-cooled, 25-hp engine and 6-speed transmission. The bike has received high marks for build quality, price, and details like the pre-programmed shift light and digital speedo / gear indicator. Says MCN of the machine:

“It’s effective, idiot-proof and economical and its classy touches, badge, two-year warranty and more lift it above the general morass.”

While it isn’t as powerful as 300-class entry-level sport bikes like the Yamaha R3 and Honda CBR300, the bike is a stout commuter and overall workhouse whose styling doesn’t scream for the local constabulary to write you a speeding citation. What’s more, the bike should be less expensive to insure than its sport-oriented sibling, the GSX250R, whose super sport styling and “GSX” pedigree could translate to high insurance rates.

That said, there’s a wide range of rates for bikes in the 250 class, and the GW250 is no exception. It’s important to do a little homework, comparing quotes from several insurers — otherwise, you’re simply asking to pay too much. 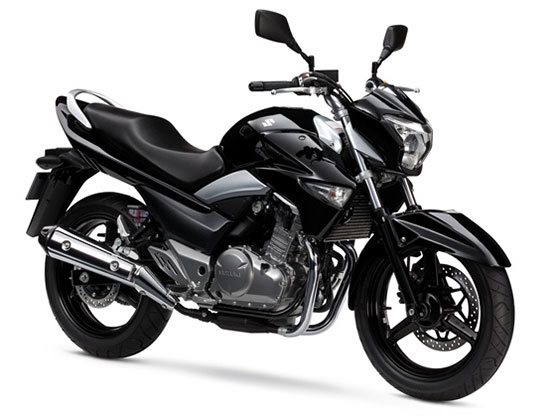 As you probably know, it’s very tough to achieve any kind of level comparison of insurance rates, as they vary extensively based on a wide array of factors — riding experience, driving record, marital status, zip code, coverage limits, and much more. That said, we have collected real-world rates from a few GW250 owners to give you some idea what to expect. The 250-300cc entry-level sport bike class has been on fire in recent years, with the machines becoming ever more powerful and sophisticated year after year. In 2017, Suzuki entered the arena with the their GSX250R. But the engine came from the company’s old workhouse 250, the GW250, which has been in production since 2013.

While the GW is not the most exciting lightweight standard on the market, it’s a well-built, dependable, economic motorcycle that’s likely to run trouble-free for years on end. The 24-hp engine returns more than 65 mpg, and the reviewers have noted that the bike is easy to ride for newer riders.

At minimum, most states require you to carry liability coverage, which pays for damages to third parties and their property in the event of an accident. Importantly, a liability-only policy does not cover your motorcycle. So, while it might be the most affordable option, it’s not always the smartest.

If you’ve financed your GW, then the lender will require you to carry “full coverage,” which generally means collision and comprehensive coverage. Even if you own your bike outright, we highly recommend that you consider full coverage. To keep your rates low, you can take a weekend MSF Course, which could teach you life-saving riding skills and discount your rates by 15%. If you’re still in school, then a high GPA — typically 3.0 or above — could translate into another 10% discount.

Lastly, it’s highly recommended that you compare policies and rates before you buy — the fastest, easiest way to save the most money on insurance. Fortunately, we can help. Enter your zip code to begin.