The BMW R1100R was a naked/standard version of the company’s air/oil-cooled boxer twin. It offered front and rear telelever suspension and shaft-drive, and was well-suited for a wide range of uses:  commuting, sport-touring, and even riding the twisties.  While slightly underpowered in stock trim, the wide torque range and commanding riding position made the bike a popular choice among couriers and messengers.

Mauricio Tavares, better known as JT among his friends, wanted to build a bike that would represent his motorcycle parts and accessories brand, Max-Inc. His vision was for a brutish scrambler, and he enlisted the well-known BMW custom builder Donovan Muller of Johannesburg’s Cytech Motorcycles to turn dream into steel.

Below, we let JT give you the full story on this beautiful, brutal build. I first owned this bike in it’s original form in 2012. Parted with it to raise some cash to start a business. The mate I sold it to was T-Boned by a delivery bike in November of 2015. Mangled tank, hole in the shock, twisted telelever and all I couldn’t resist buying it back. I did so with a vision of building a scrambler with brute torque, the boxer motor was perfect. The frame not so much!

Enter Donovan Muller, a gifted bike builder located in the South of Johannesburg. Donovan runs a BMW specialized bike shop called Cytech Motorcycles. I wanted this bike to represent my brand, Max-Inc, and I wanted it done correctly. Although I had the vision for the bike, Donovan was the master builder behind this project and the person responsible for turning my dream into reality!

The bike was completely stripped, a new left fork and telelever was sourced, bearings and seals replaced, major engine service done, now the fun stuff could begin. The instrument cluster was stripped down to make way for a Koso Digital Speedometer which includes all your telltale lights, rpm and fuel gauge. An all-in-one set up means a clean front end. The original handle bars were used since they are raised and would come in handy when standing on the bike in typical scrambler style.The original headlight and indicators were replaced with a clear lens headlight and LED rubber mount indicators from Max-Inc. The headlight was a bottom mount, but mounted upside down with wiring to suit the Hi/Lo Beam switch. This all meant custom brackets for the headlight and front and rear indicators. The indicators are thin and sleek and somewhat out the way, matched the look perfectly. 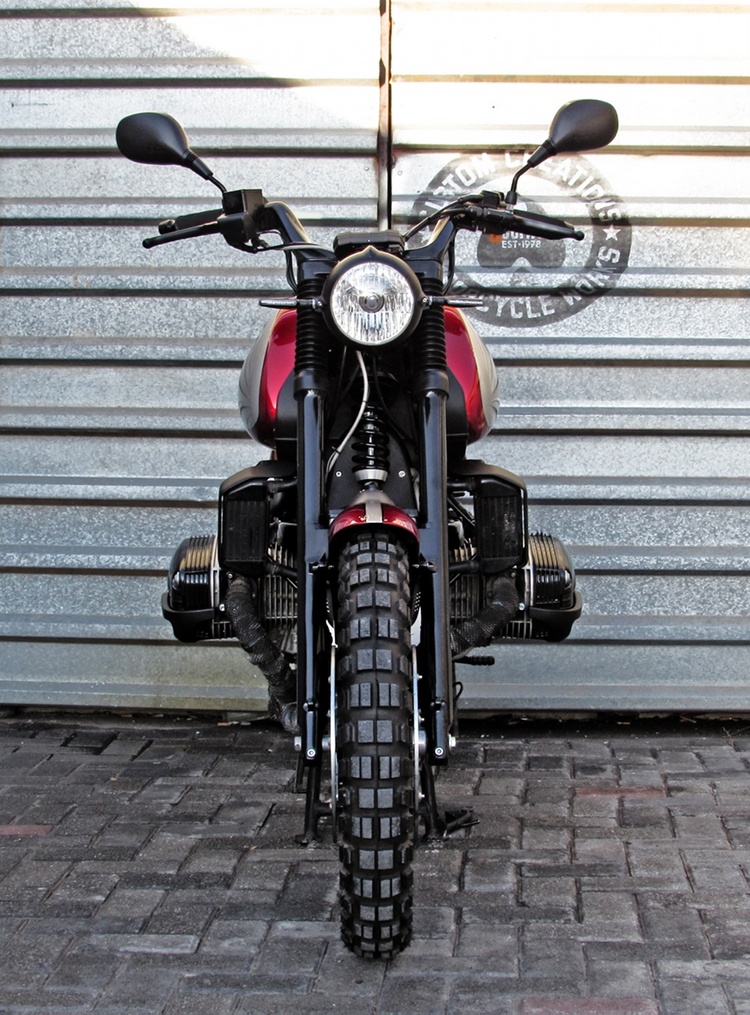 The original wheels were alloys, 17″ at the front and 18″ at the rear. These were ditched for wire wheels off an old 1100GS. Once treated and powder coated they were good as new. Now to fit a 19″ front wheel on a fork designed for a 17″ rim! Adding spacers between the fork bracket and telelever gave the additional extra height needed. A front mud guard off the same GS was cut and massaged to fit the new 19″ wheel.

The sub frame was cut where the pillion seat begins. The added weight of seat latches, hinges etc was now gone. A hoop was shaped and welded to the remainder of the sub frame with a little shaping and grinding. The original seat pan was used and cut away and shaped to obtain the desired look, then wrapped in leather.

The original air box was removed to give the bike a lighter look visually. Two cruiser style air filters were sourced from the U.S in matt black and modified to fit the original throttle bodies. With the engine now completely exposed the wiring had to be re-routed to remain hidden. The idea was always to keep it as clean and neat as possible. The bike already had performance headers so a custom performance Remus tail piece was added which left the rear wheel exposed for that “floating” rear wheel look. The headers and collector box were wrapped in heat wrap so it would just disappear below the bike and at the same time add some texture to the build.

Handling was improved by adding adjustable Wilber shocks front and rear. The foot pegs were replaced with the aggressive off road type made of stainless steel. Even the rear brake fluid reservoir was replaced with a cool anodised one in black, also from Max-Inc.

The telelever, shaft, sub frame, handle bars, forks, wheels and valve covers were all powder coated for a more robust finish. The rear mudguard is literally a piece of plastic off another bike moulded and shaped into place to fit a neat LED tail light. The overall look was completed with a set of Metzeler MCE Karoo tyres and a candy red and silver spray job to really make the bike pop!

The end result is a really unique head turner which has become my daily. It’s super nimble and with all that weight gone it has tons of get up and go and just a pleasure to ride!