The Honda CM250 was a 234cc air-cooled parallel twin produced from 1981-1983. The bike — a predecessor to the Rebel 250 — had decidedly “cruiser-ish” styling, though European-spec models offered a healthy 27 horsepower for the displacement. Enter Max Inhulsen of The Netherlands, who bought his 1982 Honda CM250 for $250 from a man living in a former mental hospital in the woods. Max, who spent his teen years wrenching on mopeds, saw the potential behind the cruiser styling. He admits the bike build became an incredible help and rebound during a two-year period of personal challenge — something a lot of us can relate to, including yours truly.

Without further ado, we get the full story from the man himself. Three years ago I was tired of daydreaming about wrenching on bikes and really missed the joy I had while wrenching on mopeds whilst in my teen years. I decided I wanted a small bike to begin with, since the only place I had to work on it, was in the garage of my granny.

After a couple of months searching on the internet I came across a Honda CM 250, which really wasn’t the most sporty or adventurous looking. But I could really see some potential underneath the chopperish look. Before I knew it I was on my way to the seller. He lived in a former mental hospital in the midst of a forest, pretty haunting place it was, but the guy was super friendly and for 250 bucks I was the new owner. Back home I rode around on it for some time, while I did not have my licence yet, so it was a good adrenaline rush nonetheless. 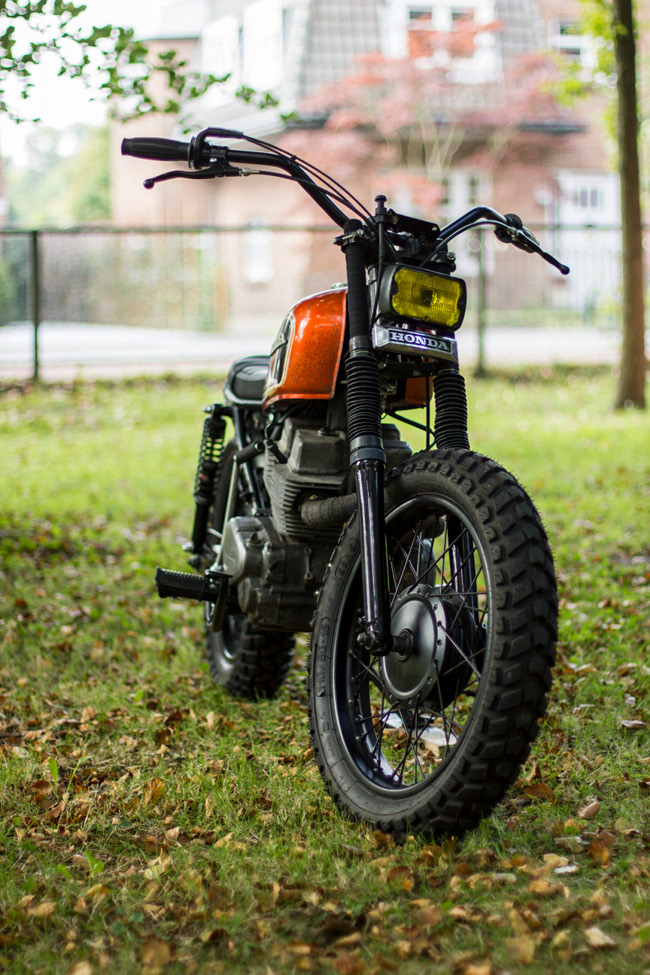 I had a pretty clear idea of how I wanted the bike to look or ‘feel’ like. Something you would find underneath a cloth in a old barn. Not too clean looking, but rough around the edges. The old Steve Mcqueen videos where he shreds trough the desert, were a big inspiration! 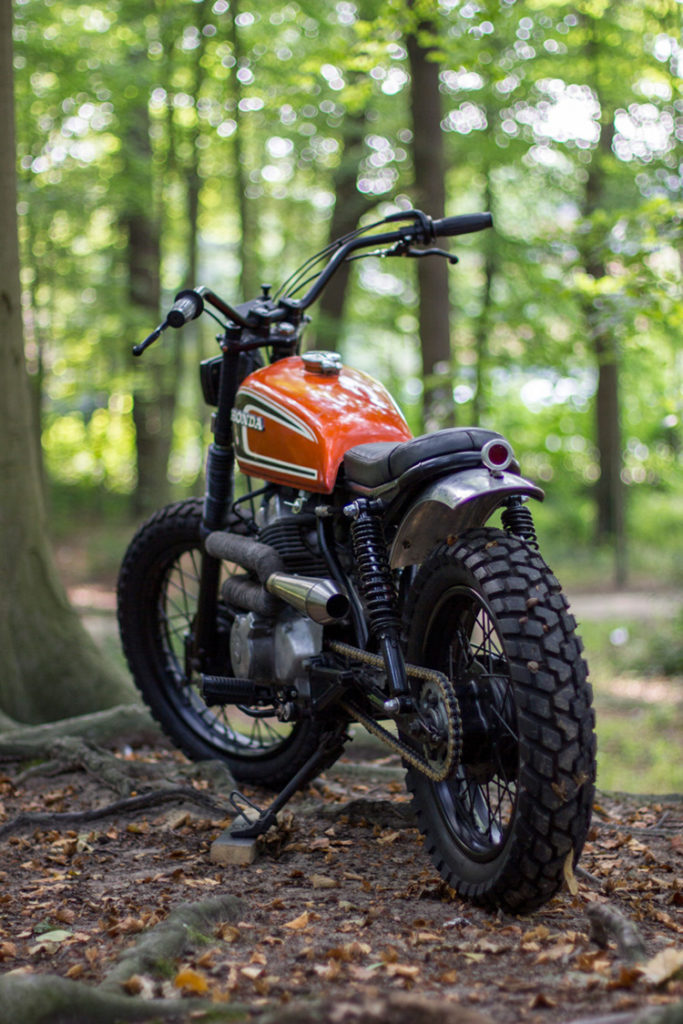 I stripped the bike to its bones and went from there. Powdercoated the frame and wheels with a matte black finish. Refurbished the front shocks and mounted new rear shocks. The bike did not have a kickstart, but some earlier models did. The castings were the same, so the original hole got Cnc-ed and an earlier model kickstart shaft went into the bike. Starter motor was removed. Made a seatpan which Silver Machine upholstered really nice! An old Honda CB 360 tank was mounted, which in my opinion is the most beautiful tank Honda ever made and aesthetically appeals to any bike out there. (Originally planned to customize a Honda CB 360, but could not find one in my price range.) I bent a custom handlebar to look as similar as an old Triumph bar. 70’s style handlebar controls were fitted as well.

Picked up an old French fog light to use a headlight. Brake light is a nice one from Prism Supply. To finish the look, a custom 2-into-1 exhaust was fabricated with a Cone Engineering muffler.

I really like the way this project evolved. I did not draw anything but only went with the ideas I had in my mind. To let things go naturally felt great. Former bike builder Chris Dekker from Tin Can Customs helped me along the way with fabricating stuff and I learned a lot from him as well. This build helped me a lot during the time when I was going through some personal challenges, and didn’t feel the happiest during two years of struggling. It was the perfect rebound for any problems I had during that time, especially when my former girlfriend broke up with me. (Let’s make it into a corny story, shall we? Haha.) The bike has a really great growl to it and fits the bike nicely.

I think that’s all!