“Impressive things are made with small details.”

This is the motto of LV Custom, a workshop founded in southwest London by partners Ludo and Clarisse. Ludo, who is from the south of France, studied bodywork for four years and completed a year-long painting certification before opening his first shop eight years ago in France. However, when Clarisse was offered a job in London, the couple decided to move across the pond. Says Clarisse: 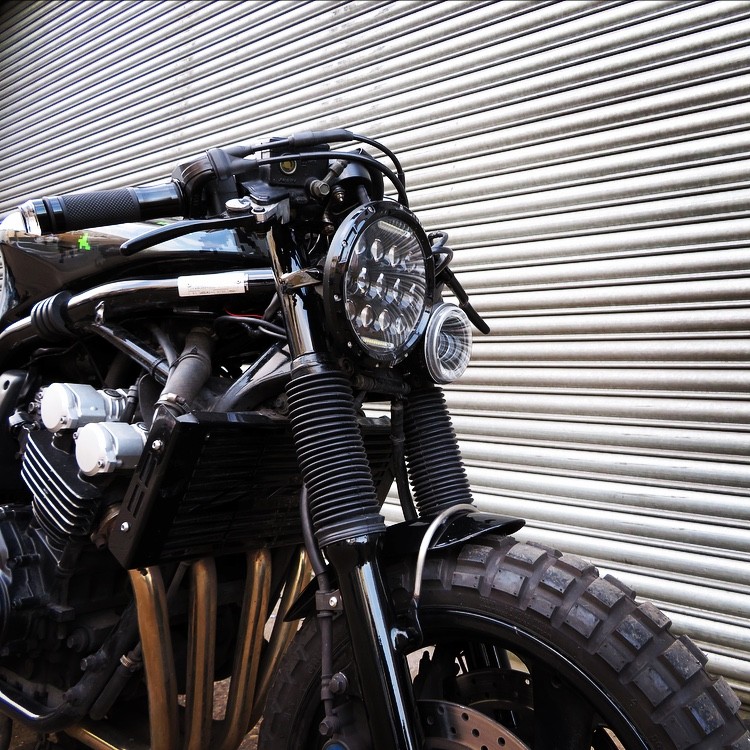 After arriving in London, the pair learned the language and started taking steps to start LV Custom. Ludo manages the workshop while Clarisse runs the marketing, graphics, and paperwork. They specialize in customization and provide a lot of services, such as bodywork, paintwork, saddlery, airbrush…all details are on their website (https://www.lvcustom.co.uk/). The Yamaha FZS600 Fazer you see here started as a reliable urban runabout. Before long, however, Ludo couldn’t fight the temptation to customize the 95-hp sport bike. His vision was a shake-up of a cafe/scrambler style, with Mad Max for inspiration, which led to a Jeep Wrangler headlight, knobby tires, and a minimalist tail and seat. Below, we get the full story on this burly Fazer, as well as photos from Ludo.V and DV images! One Sunday, Ludo found this stock 1999 Fazer online. The afternoon he went to see it, the student who was selling the bike told him he was afraid to ride in London. The engine had been rebuilt 6 months before, which was a good point.  There were some scratches but nothing bad. The perfect purchase. This bike got two different looks from us. The first was a full respray in black, red, and white 90’s inspiration. We started to use it quite a lot because it’s a nice ridable bike, and also the engine was reliable and low mileage: 20,000 km. But when you ride a stock bike and like having your own style, how can you not be tempted with customization? One day Ludo decided to give to this Fazer a new style, a shake of café racer/scrambler with Mad Max inspiration. The funny thing is that the fuel tank has some detail that you won’t notice at first glance, such as skull head or space invader character. We love subtle motifs. That’s how we made this sturdy and striking Fazer.