The John Player Special, built for the father of an F1 driver…

We see a lot of Honda CX500 builds these days, but rarely do we see a CX650C — a one-year model available only in 1983. The CX650 Custom had a completely different frame, rakish and low, built to achieve the cruiser look so popular among American buyers of the period. Suffice to say, the bike makes for a challenging starting point. 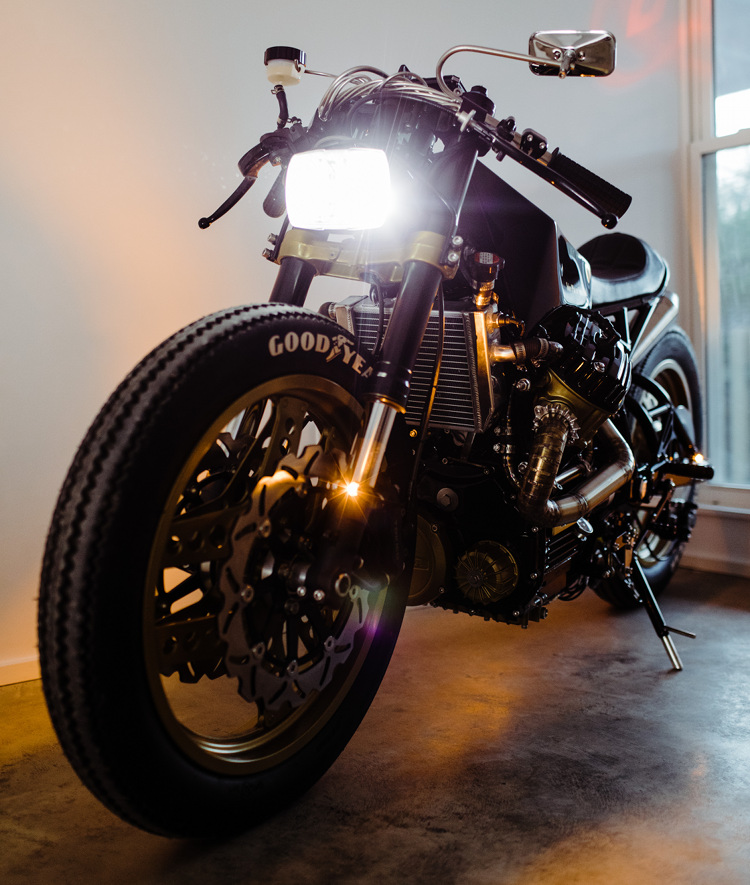 Enter one of our favorite young builders in the world, Art Henschell of Arkansas’s One-Up Moto Garage. Art took the leap three years ago, starting his own workshop. He works solo out of a 600 square foot space, putting at least 400 hours into each of his builds. Though the work can be a grind, he’s quickly developed a name for himself, with a signature style that’s drawn praise from all over the world. This Honda CX650C was built for the father of a Formula 1 driver. The detail is just staggering, from the TIG-welded 2-2 exhaust to the hand-made stainless steel gas tank to the 24-karat gold leaf decals. Then there’s the mono shock, featuring a fully-adjustable GSX-R unit, as well as the rare 18-inch “boomerang” rim, 10-piston brakes, and hand-painted sidewalls recalling the Goodyear F1 tires of old… The list goes on and on.

Below, we get the full story from Art himself, as well as some staggering shots from For the Love of Auto — many shot on location at @siloarch. I’m in my 10th year of motorcycle obsession. I got into it when I was 17 and fixed up bikes through college. About 3 years ago I had to decide to either get a day job or jump feet first into building professionally and so I took the leap of faith. Since then it’s been a grind. I build completely solo; each bike has at least 400 hours of my time in it and can take me between 3 and 5 months start to finish. Beyond building I’m also constructing a One-Up Moto Café in my home town of Fayetteville, AR that is set to open next fall. My shop is nothing special, I have basic machine and welding tools wedged into a 600sq ft space, but it’s all I need. The bike was built for the father of a Formula 1 driver; the F1 enthusiast wanted the bike to honor the infamous Team Lotus John Player Special car originally driven by Mario Andretti and Gunnar Nilsson. 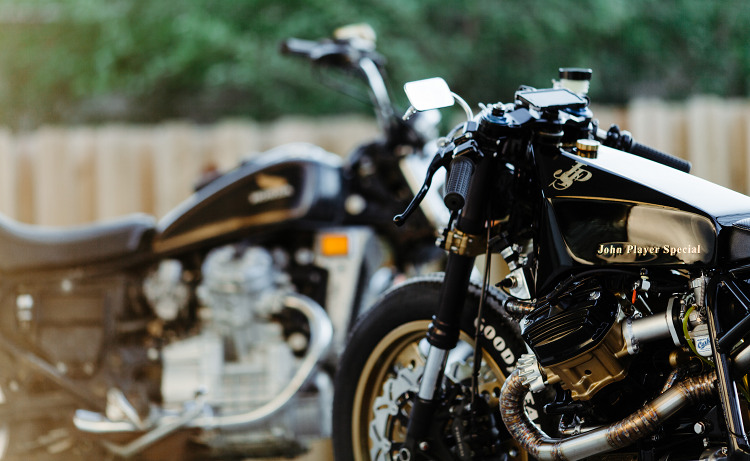 I leaned on the JPS F1 car for inspiration for the color scheme, long low stance, and six spoke gold wheels with tall sidewalls that have JPS’s sponsored “GOODYEAR” logo hand painted on them (since Goodyear doesn’t make motorcycle tires anymore). After fabricating the stainless gas tank I realized that it is reminiscent of traditional chopper coffin tanks, an accidental reference I totally dig. Buried under the tank’s clear coat lay 24k gold leaf custom decals. #12 was chosen because that is the client’s birth date, and one of the JPS race numbers. The upholstery design idea came from an aerial view I saw of an F1 car’s nose. I fitted Honda CBR600RR forks and anodized the upper tubes black. The front wheel was sourced from a Honda CX500 turbo. The problem is the CX500T has an 18” front and only a 17” rear. Matching rims were necessary for the stance I wanted to achieve so I hunted down a rare CX650E that came with the only 18” rear “boomerang” rim Honda made. The matching wheels were powder coated gold and mounted with a one-off rear disk brake adaptation and larger 310mm front disks delivering 10 pistons (compared to the original 2) within three calipers of stopping power. I needed a tight central rear suspension to build the exhaust around, so I went with the new GSXR600 shock which gives full adjustability in a one-piece component. I heavily gusseted the swing arm to handle the mono shock. The whole sub frame is hand made. I rebuilt the engine, replaced mechanical seal, lapped valves, new head gaskets, valve seals, stator, it got everything. I wired the motogadget v2 and components with Motone switches to the Shorai LI-ion battery neatly tucked away; a MOSFET regulator keeps it all within tight voltage tolerances. Finally, I shaped the seat with dense neoprene and a thick gel insert where it matters, wrapped it with a few of my favorite upholstery materials and laced it with some light gold top stitching.

In the sense that I took a vintage bike, hopped it up, and stripped it down I would say it shares the soul of café racer heritage. When tasked with building a CX, I was challenged with making something unique from one of the most common bikes to build right now. The 650c is a particularly awkward starting point. I wasn’t sure if I’d be able to completely remove the strong 80’s styling. Looking back through the final photo set, I’m proud to say that the iconic engine is the only part of the bike that I can recognize from the confused moto that rolled into my garage 3 months ago. That, and it is a LOT more fun to ride!