The Kawasaki GPz1100 was one of the last kings of the air-cooled superbikes — the brutal, big-block speed machines fated to die at the hands of the liquid-cooled, 16-valve, alloy-frame sport bikes to come. Says MCN of “the Daddy GPz”:

“The GPz1100A was the ultimate incarnation of the breed and the fastest and most revered of its type. It had pure-bred heritage by the bucketload, racing DNA, truly pioneering technology and brazenly glamourous good looks – and if that little lot doesn’t add up to a ‘modern classic’ then we don’t know what does.” Enter Dave Solomon, the mad Englishman behind Butchered Classics — a community dedicated to pre-1990 bikes modified in a non-purist fashion, from braced swingarms to crazy engine swaps. Dave himself has earned an “evil reputation” for “butchering” classic Kawasakis, including his Bandit-engined KZ1000 and his beautiful Z1000 restomod. So, it’s only appropriate that Dave would turn his mad eye to the famed GPz1100. Starting with just a frame and tank, Dave built the “Kawasaki GPz1157” you see here, so-named due to the 1157cc engine from a Suzuki Bandit 1200! Strangely enough, the 98-hp, 16-valve Bandit engine fit into the stock engine mounts!

Below, we let Dave — one of our favorite storytellers — give us the full story on the build. So, the most iconic litre-plus bike of the eighties same may argue is the mighty Suzuki Katana with its sharp stealth-like lines and massive fuel tap. For me, the GPz1100 stole the show. I found that as much as I liked to stare at the big Suzuki as a spotty teenager I found all the design effort was focused on the front part of the bike and from the seat back was… let’s just say lacking any effort!

I had my array of big bikes back in the day and really enjoyed my 24 months of Unitrak ownership in the late eighties / early nineties, then (as ya do) I moved on. Now, as you or may not be aware, I’ve got an evil reputation for “butchering” classic Kawasakis. I’ll never, however, take the grinder to one that’s complete and in good working order, but I will take a chassis or bare frame that’s only next destination is the local junk yard. This is one said example. A friend had a frame and a tank for sale and I had a few months of “nothing planned,” so decided to have a go at something a tad different… Now Mr. Kawasaki has produced literally thousands upon thousands of Kawasaki motorcycles with Kawasaki motors. I could’ve gone out and bought the right parts, but instead I took the opportunity to fit an equally-deserving replacement from a donor Suzuki 1200 Bandit.

This donor came with some nice additions. Ohlins rear suspension gave the JMC dual-braced swingarm a nice stance and the polished GSXR1100 wheels were held in place up front with some nicely polished forks. The wheels were dospatched to custom painter John Tooze of ReBorn to be Wild fame, who applied the Candy Gold over the polished alloy and clear coated ’em, then with a matte lacquer. Meanwhile the bodywork went in a different direction, to Chris Davison who paints from his six foot square garden shed and did the build proud. A new stem was supplied by Neill Curtis of Burlow Engineering and surprisingly enough the motor went straight in on stock Kawasaki front ‘n rear engine mounts. The seat was posted to Scotland where Tim Dudley of T D Trimmings gave it a “Corbin” bespoke cover in a Lawson style to retain some of its eighties heritage. Standard foot peg hangers were also retained in a hope to keep the eighties alive and to stay within budget (most important LOL). Unfortunately the LED tank display was “no more” — however, a Chinese supplier from that famous online auction page supplied me with a more than satisfactory replacement display that shows temperature and a Vol meter which was supplied and delivered to my home within a week for under ten English pounds…crazy! ​
Not to everyone’s taste I’m fully aware, but it’s one less bike frame on the scrap pile and one more bike on the road, built within three months and to a budget most can afford… What’s not to like about that? Zed Turbo: Kawasaki Z1000 Turbo by Butchered Classics - “You’ve spotted the turbo then?” These were the unforgettable words heard by our friend Dave Solomon of Butchered Classics as he stood outside his local Kawasaki bike shop at the impressionable age of 11 years […] Butchered Classics: Moriwaki Tribute! -   “Looks that take you right back to 1981 and a powerplant that even Wayne Gardner would’ve been happy with…” Moriwaki Engineering is one of the great names in motorcycle racing, closely entwined with the […] 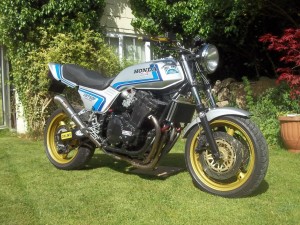