Last year we featured the Harley-Davidson “MX1000,” a 1000cc Ironhead dirt bike built by Takuya Yonezawa — “Yone” — the founder of Japan’s Bull Original (www.mc-bull.com). That bike was no mere showpiece — as the photos and videos attest, Yone regularly puts the 1000cc V-twin dirt bike through its paces on motocross tracks and in sand races. Now we’re thrilled to feature another one of Yone’s builds, this Sportster cafe racer based on a 2005 Harley-Davidson XL1200. Yone has lived a varied and adventurous life, to say the least. He grew up in Sapporo, where he was involved in motocross and boxing, and later joined a Bōsōzoku gang in his teens. Says Grade Co. of that era:

“The Golden Era of Bosozoku: night racing, crime, hard guitar music and cool American clothes. This time determined the new generation; the generation of those people who supported the developing of Japanese custom culture. Takuya Yonezawa was one of them.” He discovered American hardcore music through VHS motocross videos and is now a nomad member of Rumblers CC, the club founded by Roger Miret, the vocalist of band Agnostic Front. In 1999, Yone founded his brand Bull Original and later moved to Yokohama, where he opened his workshop. Around this time, he had a very close brush with death:

“I got into an accident and survived clinical death. I was about two weeks in resuscitation. I remember it was like I was literally alone in empty white room, but I’m still not sure whether it was for real or not.”

In this new city, Yone and his team would become involved in the legendary Yokohama Hot Rod Custom Show, earning various awards. The Sportster cafe racer you see here was built for a customer. Based on a rubber-mount 2005 XL1200, the build has a decidedly elegant, almost European look. Yone imported parts from England, Italy, and the USA, while molding and developing other elements on his own, such as the tail cowl. His intention was to give the bike a lean, level silhouette. Ultimately, this is one of the most beautiful Harley-Davidson cafe racers we’ve seen. Below, we get the full details on the build. I have been involved in motorbikes in a racing environment since I was eight years old. My style to be fed back from there is a style that not shapes but also features.

The theme from the customer was a “cafe style” build. I made it freely custom. It is a European cafe racer style.

Imported the front fairing from England, imported gasoline tank from Italy, and we imported RSD parts from the US.

I set it up with my original tail cowl.

The first thing was the gasoline tank. I did various other work, and the rubber mount engine has settled neatly.

It is to make a level silhouette… 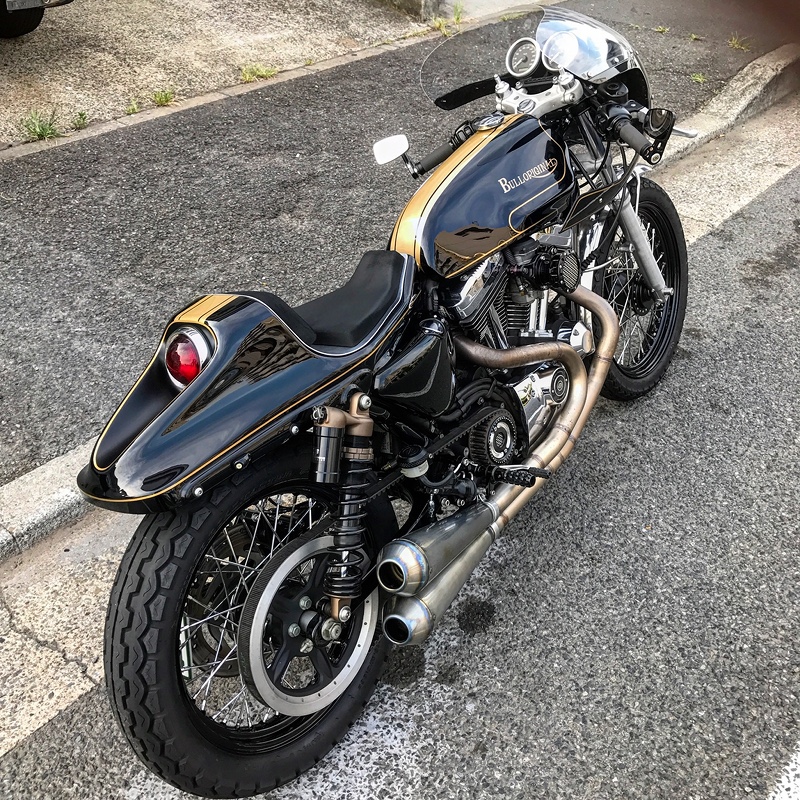 It is that I left the original skeleton without cutting the frame… I really wanted to cut the frame…an unconstrained state haha!