The Girl in the Spider’s Web stars actress Claire Foy as Lisbeth Salander, the vigilante hacker from Stieg Larsson’s Millennium book series. In the film, she’s hired to retrieve an NSA computer program known as Firefall, which is capable of accessing the world’s nuclear codes. Though she’s able to retrieve the program, mercenaries from an elusive international crime syndicate known as “The Spiders” steal it from her. What follows is a violent game of cat-and-mouse between Lisbeth, The Spiders, the NSA, and the Swedish Security Service (Säpo). The film premiered at the Rome Film Festival in 2018 and garnered mix reviews. It only has a 43% score on Metacritic and 40% approval rating on Rotten Tomatoes, where the critics’ consensus reads thus:

“The Girl in the Spider’s Web focuses on the action elements of its source material for a less complex — and only sporadically effective — franchise reboot.” Be that as it may, we care more about bikes than film critics, and Claire Foy / Lisbeth Salander does ride a pretty cool Ducati Monster in the film.

The Girl in the Spider’s Web Motorcycle 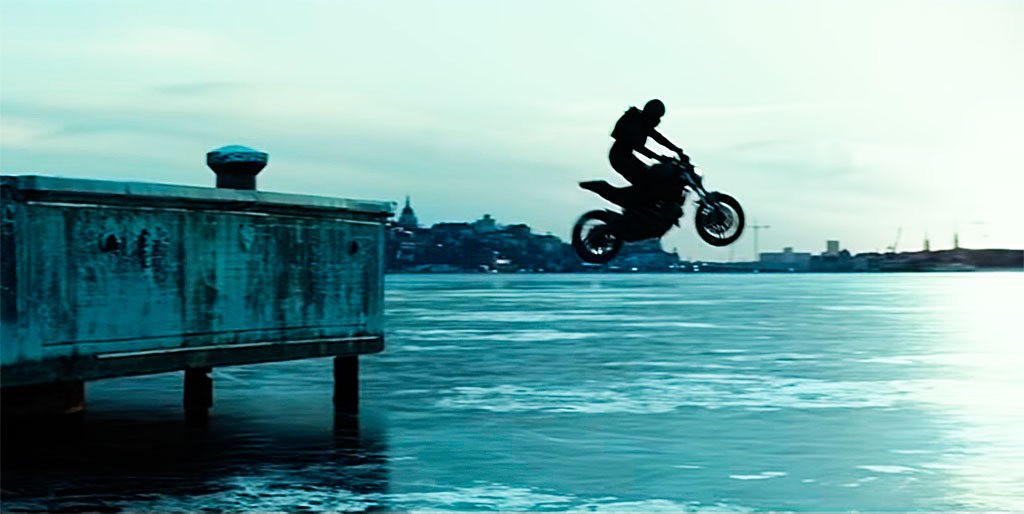 Lisbeth’s motorcycle in the film is a 2017 Ducati Monster 797. Launched in 1993, the Ducati Monster (Il Mostro in Italian) is the company’s series of naked / muscle bikes, powered by 90° V-twins ranging in size from 400cc to 1200cc. The bike has become a popular machine among several celebrities, including Lewis Hamilton, Orlando Bloom, Alanis Morissette, and British MotoGP presenter Suzi Perry.

The Monster 797 was introduced 2016 as an entry-level machine, with an air-cooled 803cc “Desmodue” twin offering 74 horsepower and 51 lb-ft of torque. The bike weighs 425 lbs and includes a 2-into-1 exhaust, LCD dashboard, servo-assisted slipper clutch, and 43mm Kayaba forks. Says Ducati of the machine:

“The Monster 797 is the ideal bike for those who want to enter the world of Ducati for the first time. As sporty and essential as any Monster, it offers everything you need for a fun ride that is also easy and intuitive.” Lisbeth’s Monster is outfitted with knobby tires, which give the bike a burly look akin to custom sport scramblers from the one of our favorite cusotm builders, Droog Moto…even if those tires don’t seem quite adequate for her race across the ice in the film’s two-wheeled chase scene.

Chase Scene: The Girl in the Spider’s Web