The BMW R100RT was the touring version of the airhead series. It featured a full fairing — the first on a factory motorcycle — as well as an adjustable windshield, twin panniers, and of course the legendary 247 flat-twin “airhead” boxer engine. It was a bike built to travel long miles at Autobahn speeds in relative comfort, largely protected from wind and weather. Beneath the big fairing and hard luggage, however, lay a roadster waiting to be unleashed. Enter Judd Blunk of Woodacre, California, whose two-wheeled obsession started in the late 60s, when he was a corner worker at a Kansas motocross track his brother managed. Since then, he’s ridden all over the continent, from northernmost coast of Alaska to the Nevada desert to the aspen forests of Colorado. Since retiring from an unnamed German car company, he’s been able to dedicate even more time to his mid-80s BMW obsession, working out of his well-outfitted home shop “Blunk’s Garage” — named after the garage his grandfather and great-uncles owned in Oxford, Kansas, in 1929. Judd came across this 1989 donor when the previous owner was moving to Hawaii. He didn’t have a clear plan of attack, but he knew a full restoration to factory trim was not in the cards:

“[The previous owner] kept asking me what I was going to do with it and I avoided the question. I got the distinct impression he wanted it restored to its former glory, and in my garage that wasn’t going to happen.”

After trading for a pristine GS tank, he decided to strip everything down to the bare metal, showing off the raw and classic form of the Bavarian machine:

“I thought maybe they would both look good stripped and clear coated — why cover up this beautiful metal with paint?” He fabbed up a new rear subframe, seat, electrical box, and dashboard, and outfitted the bike with an array of modern upgrades — all detailed below. We especially love the one-off exhaust with custom aluminum heat shields. Recently, the “Silver Wasp” was featured in the prestigious One Moto Show in Portland — congrats, Judd! Below, we get the full details on the “Silver Wasp” from the builder himself. I bought this donor bike as a full dress RT and didn’t have a specific plan of attack. The previous owner was moving to Hawaii, and was thinning out his stuff; he kept asking me what I was going to do with it and I avoided the question. I got the distinct impression he wanted it restored to its former glory, and in my garage that wasn’t going to happen.

I got to inspecting it and discovered it was in pretty good shape — especially the wheels and gas tank. I immediately traded that tank for an equally pristine GS tank — so now I had wheels and a tank with zero defects…what to do? I thought maybe they would both look good stripped and clear coated — why cover up this beautiful metal with paint?

So I disassembled, inspected, cut nonessential tabs, stripped the frame, monolever, tank, wheels and engine of all paint — then media-blasted, and clear-coated the whole lot.

I fabricated the rear subframe, electrical box, seat and dash. The tubes are 6061 for strength and the flat stock is 1100 Series pure aluminum for corrosion resistance and “formability.” They too were media-blasted and coated with self-priming urethane.

The name “Silver Wasp” came during a Thanksgiving break in Michigan. We were all sitting around talking with an old family friend and I told him I had to come up with a name for the bike to submit it to The 1 Moto Show in Portland. He looked at a picture of the moto and quickly said, “it looks like a silver Wasp from the front” — that was it! Anyway, I hope you enjoy looking at it! 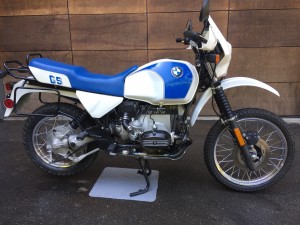 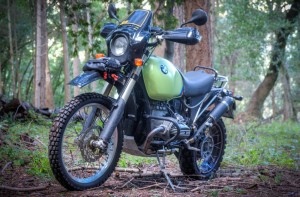