Hooligan flat track racing has exploded in popularity in recent years.  The “run what you brung” spirit of the racing recalls the early days of stock car racing, as lightly-modified street bikes slide sideways around dirt tracks in towns big and small. The barrier to entry is quite low: street bikes with a 750+cc engines, stock frames, dirt track tires, and no front brakes. The most popular mount is the 883 or 1200 Harley-Davidson Sportster, which can be bought and fielded for thousands less than a full-on, purpose-built race bike. Whether it’s flathead Ford coupes, European cab-over trucks, or V-twin “Milwaukee tractors,” there’s something especially entertaining about road-going vehicles on the track — it makes for great racing. Enter the good folks at Tucker Speed in Ogden, Utah — an independent motorcycle shop specializing in American V-twin bikes, including repairs, maintenance, and custom builds. Owner Tony Tucker got his introduction to hooligan racing through shows like Born Free and Mama Tried, but he wasn’t happy just to sit back and spectate. Says Tony:

“I didn’t want to sit in the stands and watch. I wanted to be out there racing.” With a background in motocross and desert racing, as well as a lifelong love of Harley-Davidson motorcycles, Tony found hooligan racing to be the perfect combination of his passions. Three years ago, after coming home from Mama Tried, he bought a Sportster, built it into a basic hooligan tracker, and has been racing a few times a year, including qualifying for and racing in the X Games two years ago.

“I’ve raced on dirt tracks, Coke-syrup concrete tracks, on asphalt tracks…I’ve had a ton of fun with it and want to continue to pursue it.” After three years of racing events here and there, mainly during the summer months and at various shows, Tony decided 2020 was the year to up his game:

“This year I decided I want to dedicate, commit, and step up my game a little bit.  So I’ve decided I want to run the entire Super Hooligan series, which is going to be nine rounds of racing, from February through October.” Not only that, but Tony and crew decided to document the entire 2020 Super Hooligan season on their new Youtube channel, calling the series Flat Broke & Busted. More below!

His race bike started life as a 2001 883 Sportster, which he originally built into a basic hooligan: 1200cc engine kit, dual 19-inch wheels with flat track rubber, motocross-style bars, etc. It was the perfect mount for the first few years of racing, testing the waters and learning the ropes.

However, when he tore down the bike to fix the damage from a crash last October, Tony decided he wanted to change a few things on the bike as well. If he was stepping up his commitment to racing, he wanted to put his best foot forward in terms of the bike itself.

One of the first big changes was cleaning up the area beneath the seat, which normally includes a bulky battery, oil tank, and more.

“We decided to take everything from underneath the seat and remove it — the battery, the oil tank, all that stuff — so that it was just open there.” They put their heads together and built an oil tank like we’ve never seen on a Sportster, which fits down in front of the motor, shaving weight and moving the rest of that weight down and forward of the bike’s center of gravity. 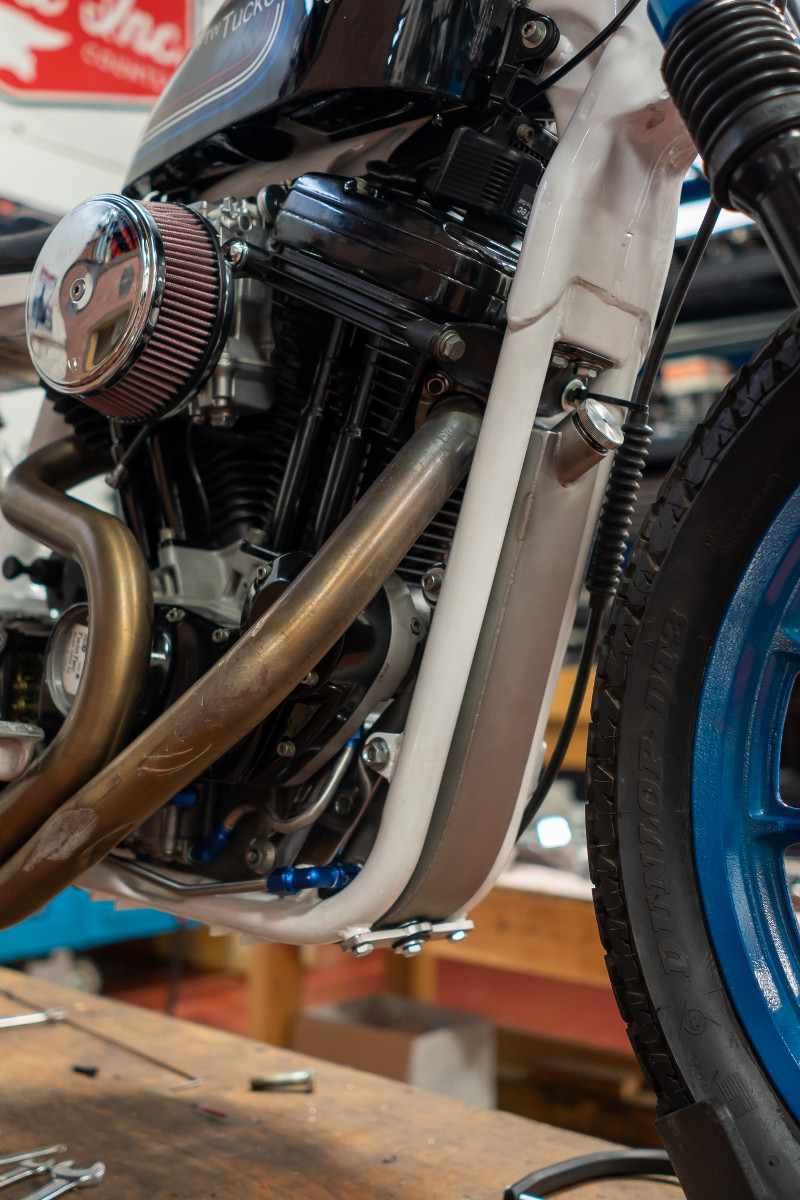 Tony says the main priority is for the new oil tank to perform well on the track, and looks are secondary. Then again, looking good never hurts:

“You can’t go fast if you don’t look good. So we’re gonna try and do both.”

Now the bike has an open triangle look like we sometimes see on vintage Japanese bikes — a rarer sight on a Harley. Meanwhile, they’re running a small lithium-ion battery beneath the seat, and they spooned on a fresh set of rubber for the season. Tony also tore down the motor and freshened it up, adding a bigger cam and a set of 1275cc pistons and cylinders from Hammer Performance — the same big-bore kit we’ve been eyeing for our own Sportster, “Blitzen Tracker”. Whereas 1250 kits used to be the norm, the 120,000psi tensile strength steel liners in this series makes a bigger bore possible. 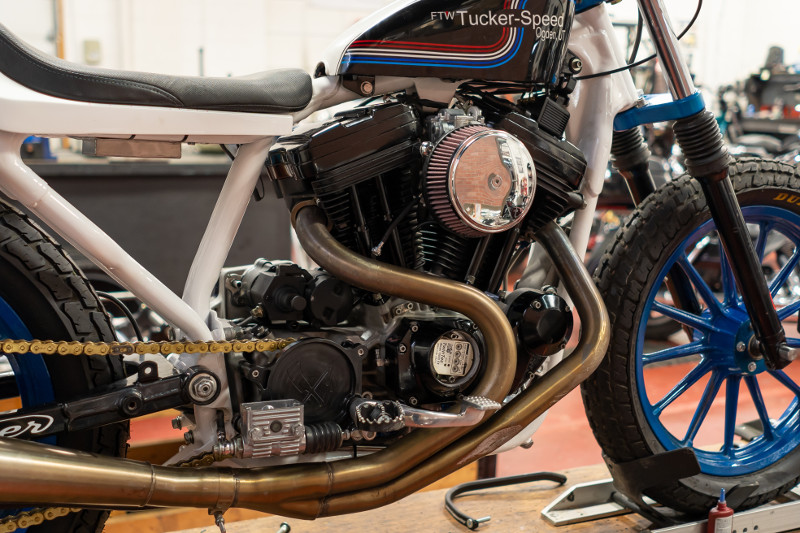 The end result is one of the sweetest hooligan trackers we’ve seen — Tucker Speed’s perfect mount to tackle the 2020 Super Hooligan season.

Tony and crew have decided to document their entire 2020 Super Hooligan season via their Youtube series, Flat Broke & Busted, showing all ups and downs of a full race schedule.

“We’re gonna continue this video series. We hope you guys will follow along this year…stay tuned.”

You can check out Episode 2 here, following their adventures in Portland for The One Moto Show and RSD Super Hooligan race.

We’re wishing Tony and the Tucker Speed crew a safe, successful Super Hooligan season. We’ll be following along this year — we hope y’all do as well!