There are builders who are always jumping from one two-wheeled platform to another, never seeming to modify the same type of bike twice. Then there are those who’ve developed an affinity for a certain model and work on them almost to exclusion, determined to get the most they can out of the original design, re-engineering weak points and improving performance to new heights. Our friend Judd Blunk of Blunk’s Garage is the latter type of builder, and his chosen platform is the BMW GS. Most of you need no introduction to the GS, which stands for Gelände/Straße (German for “Off-road/Road”). The original R80GS debuted in 1980 — a production variant of prototypes created by in-house BMW engineers in their free time, with no official development order. The GS would begin racking up wins in the Paris-Dakar Rally, setting circumnavigation records, and launching the entire large-scale dual-sport / adventure bike segment. Today, more than half a million GS models have been produced. Judd Blunk of Woodacre, California, retired from an “unnamed German car company” a few years ago, which has allowed him dedicate more time to his mid-80s BMW Airhead GS obsession, working out of his well-outfitted home shop “Blunk’s Garage” — named after the garage his grandfather and great-uncles owned in Oxford, Kansas, in 1929. Judd has ridden all over the continent, from the far northern coast of Alaska to the Nevada desert to the high aspen forests of Colorado, putting these air-cooled adventure machines to the test, and his latest build, a 1993 BMW R100GS nicknamed “Beast,” incorporates everything he’s learned: 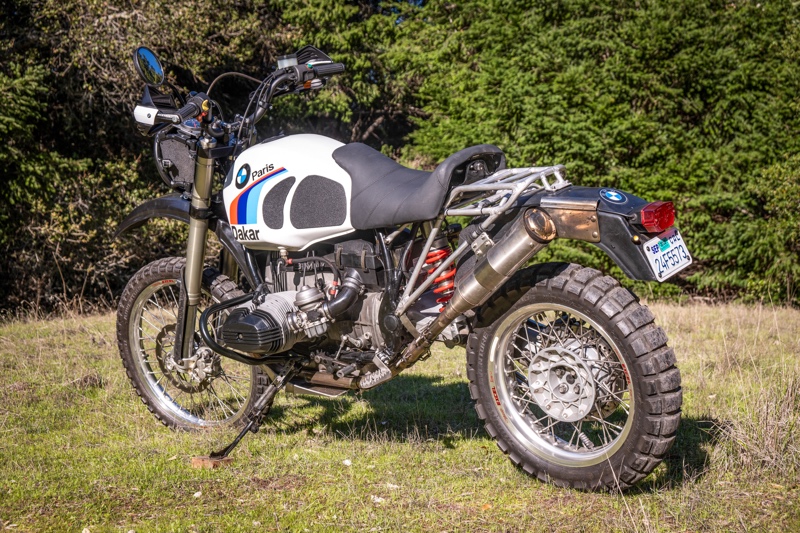 One of the main disadvantages of the GS is its heft, weighing in at 460+ pounds…dry! Judd has not only managed to trim this desert-going Airhead down to a trim 375 pounds, but it has modern suspension, electronics, and redundancies for the “paranoid adventurer” far from home. It’s an Airhead that doesn’t just look the part, but is ready to do battle with the elements — just as the motorcycle gods intended. Below, Judd gives us the full story on this BMW R100GS “Beast.” I have a thing for the BMW airhead — especially the GS version. It used to be you could buy one cheap, do a little work on them, ride the heck out of them, and they would keep on running. I’ve ridden enough GS bikes to know their weakness — weight and handling. There’s a reason the Germans call the GS “the rubber cow.” Sometimes I ride in the desert, and falling is part of it – the standard GS is a load to pick up…. So I began modifying my bikes to get lighter (read easier to pick up) and stiffer so they handle better on the NorCal twisty asphalt. This is the 3rd GS bike I’ve modified, and (I think) the best yet. With the help of Manuel Schaud at SWT Motorsports in Germany, and lots of online research, I think I’ve found the best combination of old airhead reliability, modern electrics, and suspension. 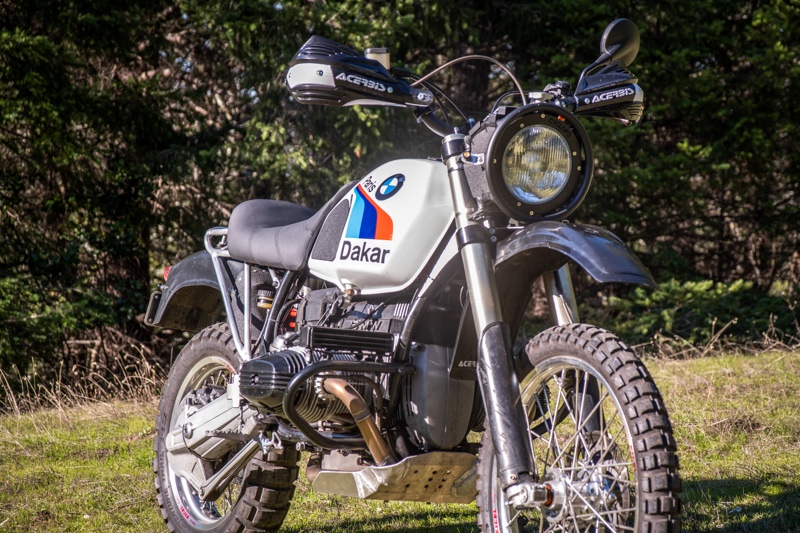 The bike started as a stock ‘93 that I bought from a “grower” in Ukiah, CA. I reinforced the frame in the fashion of HPN racers of yore, had some billet triples made, replaced the front suspension with modern USD WP 48/60 forks, and modified the frame to accept an R1100GS center shock swing arm. The bike weighs about 375 lbs dry now and gives the rider a lot of feedback when going fast on the twisty asphalt. 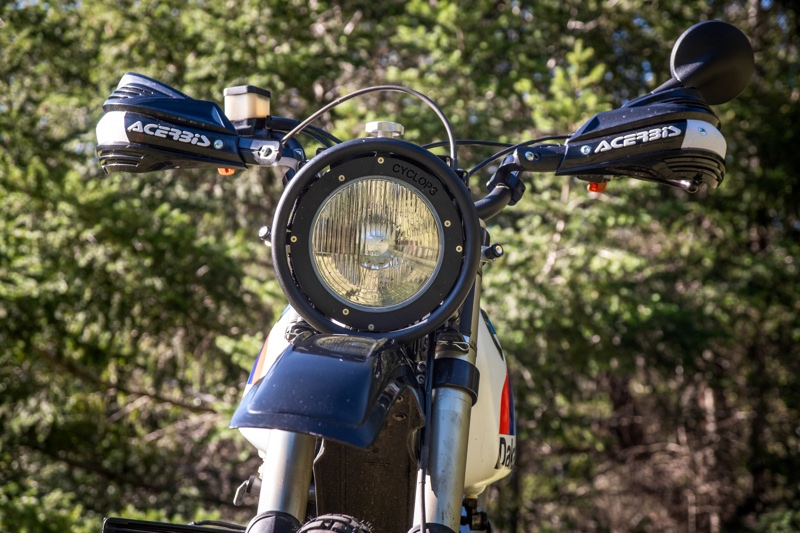 Items of interest: Full Moto Gadget M Unit electrics (I didn’t use the “Blue,” as I think a dual sport should have a key), with an M Button Can Bus in the handlebar. This eliminates all relays, fuses, and allows the paranoid adventurer to have a redundant system the size of a pack of cards (although the Moto Gadget module is almost bulletproof). I cut off the center stand and every other nonessential element of the bike. Form follows function is my mantra. (OK, the fake PD tank is an exception!) 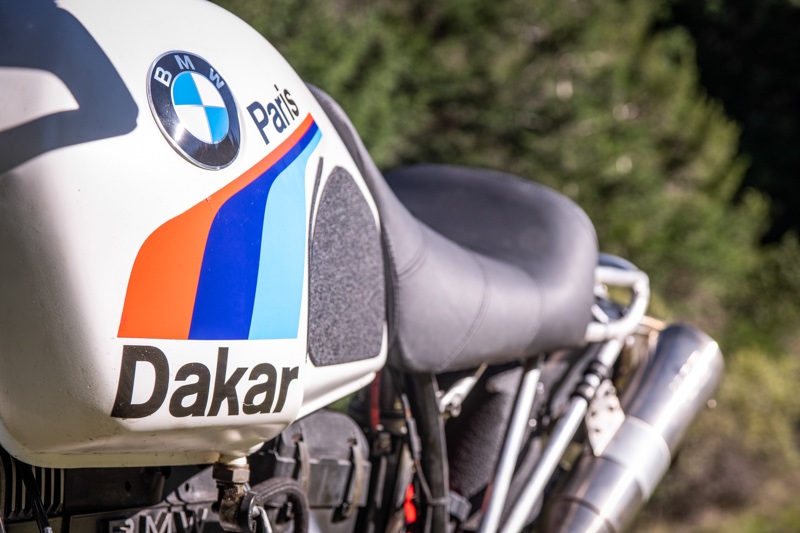 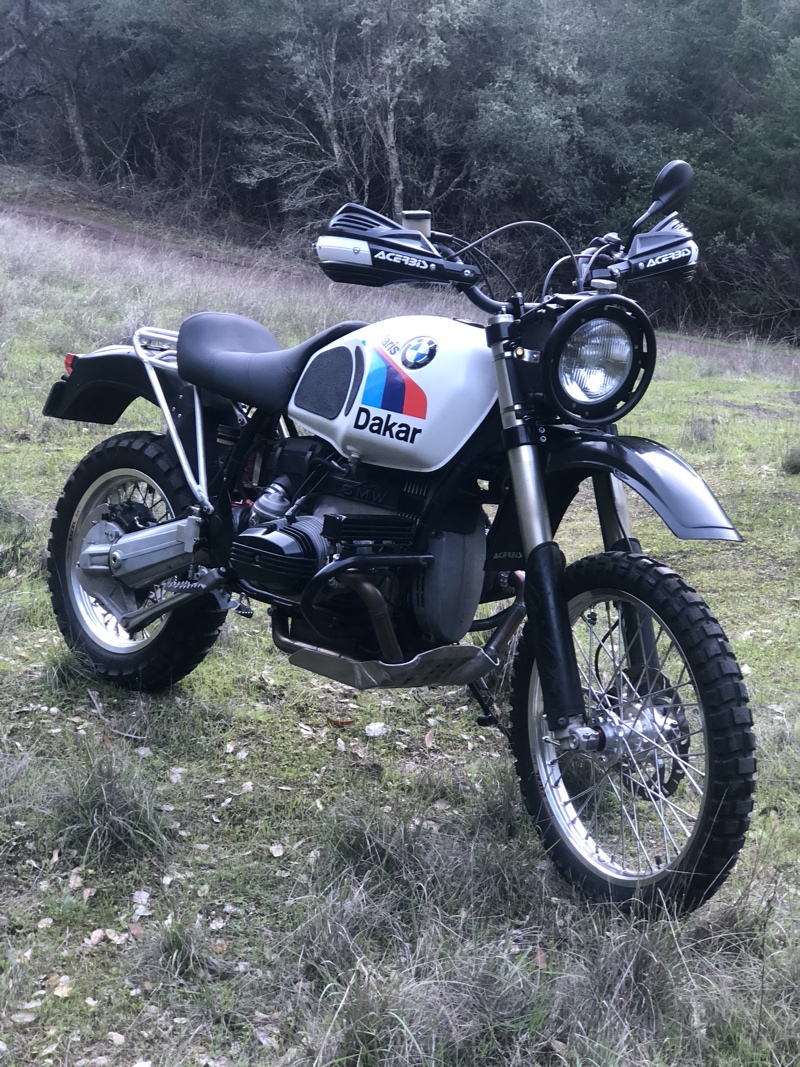