Introduced in 1990, the Suzuki DR650 has now been in production for more than 30 years, developing a reputation for bulletproof reliability and toughness in a range of climates and terrain.  The air/oil-cooled single-cylinder engine is counterbalanced for smoothness, putting out a solid 46 horsepower, and the bike weighs 366 pounds wet. Said Ultimate Motorcycling of the 2019 model:

“What’s important is how well the DR650S does its dual jobs—handling commuter and around town duties during the week, and hitting the dirt on weekends for a bit of play. The DR650S a great package, as it is reliable, low-maintenance, and will take you just about anywhere with a smile on your face.” Enter our friend Sebastien Ledis, who spent a decade and a half as a chef before making a professional conversion and opening his own workshop in the southwest of France, Seb’s Atelier. Sebastien’s Honda CX500 made our list of the Top 10 Cafe Racers of 2020, but now he’s back with something completely different, a street tracker he built just for himself during France’s Covid-19 lockdown. The donor is a 1990 Suzuki DR650 Djebel — a fairly common machine in Europe that he picked up cheap. Just about every aspect of the machine has been replaced, rebuilt, customized, or fabricated: wheels, suspension, tank, subframe, lighting, electrical system, you name it. Sebastien didn’t leave the engine alone either: The result is one stout thumper. Combined with the quick-turn throttle, Sebastien says the bike is easy to wheelie through first, second, and third gears — a real hoot in town and the surrounding streets! As for the nickname, “COCO,” it’s a nod to the (CO)VID-19 lockdown and legendary French designer Coco Chanel. Below, we get the full story on this DR650 street tracker! After a professional reconversion (formerly a chef), I opened my workshop at end 2018 beside Bordeaux in France. I built this bike for company promotion and myself. Find a cheap single cylinder motorcycle to do a flat tracker. I had a Harley Davidson 750cc flat track rear seat and LSL handlebar in the garage. Everything was redone or customised on the bike. “COCO” because I built this bike during the first COVID19 lockdown.  (CO)VID / COCO CHANEL: French fashion designer; nice name for this period. Flat tracker style for the street. Perfect in the city center. Has a quick-turn throttle for wheelie-ing in first, second, third gear! Take a popular motorcycle that doesn’t have to be expensive and turn it into a completely different motorcycle with a nice paint job. You don’t have to have a 25,000 euros motorcycle for people to turn their heads and tell you, “I love your bike.” We can have fun for much less. Vineyard Chaser: BMW R100 by Seb’s Atelier - From Blue Racer to Black Scrambler…  Back in 2020, we featured a 1979 BMW R100RT “Blue Racer” from Sebastien Ledis of France’s Seb’s Atelier. Though Sebastien is a bit of a Ducati aficionado, the iconic […] 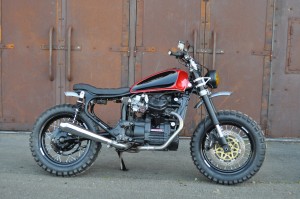