Introduced in 1980, the Yamaha RD350LC was the next evolution in two-stroke street performance. Though it succeeded the larger displacement air-cooled RD400, the LC — aka the “Elsie” or “4L0” — boasted a smaller, liquid-cooled 347cc engine whose bore and stroke matched that of the older RD350 (64 x 54mm) but made 46-49 horsepower in factory trim. At the same time, it managed to comply with the ever-tightening emissions standards that were threatening to squeeze the street-going two-stroke into extinction. In 1983, the final evolution of the RD series arrived, the Yamaha RD350YPVS — also known as the RZ350 (North America) or the RD350LC II. It was outfitted with Yamaha’s YPVS (Yamaha Power Valve System), which used a rudimentary computer to vary exhaust port height/timing, increasing low RPM torque while maintaining high RPM horsepower. Introduced at Germany’s Cologne Motorcycle Show, the YPVS was hailed as the hottest street-legal production two-stroke in history:

“The factory claim the ’83 RD unveiled in West Germany is the nearest thing to a road going racer ever produced.” —Motorcycle News, 1982 Over the years, garage builders began to create “hybrids” — restomod-style RD’s retrofitted with newer engines from the series and upgraded suspension, brakes, wheels, and more. The bike you see here is one such build, a Yamaha RD350LC hybrid from Andy Underhill of the UK, who’s owned the bike since ’99!

“This was bought as a cheap work hack but evolved into an obsession which 20 years later, you see here… Concept behind the design was to build my vision of a modern up-to-date LC, whilst keeping the retro style of the original 80’s icon.” Working out of a small 12×10 wooden shed, Andy has created one of the most baddest, most stunning two-stroke street machines we’ve ever seen. It’s a standard RD350LC frame, braced and powder-coated, with a built YPVS engine that boasts Wiseco pistons, a stroker crank, Pro Design Coolheads, Zeeltronic ignition, aluminum radiator, GP-style exhaust, and much more. 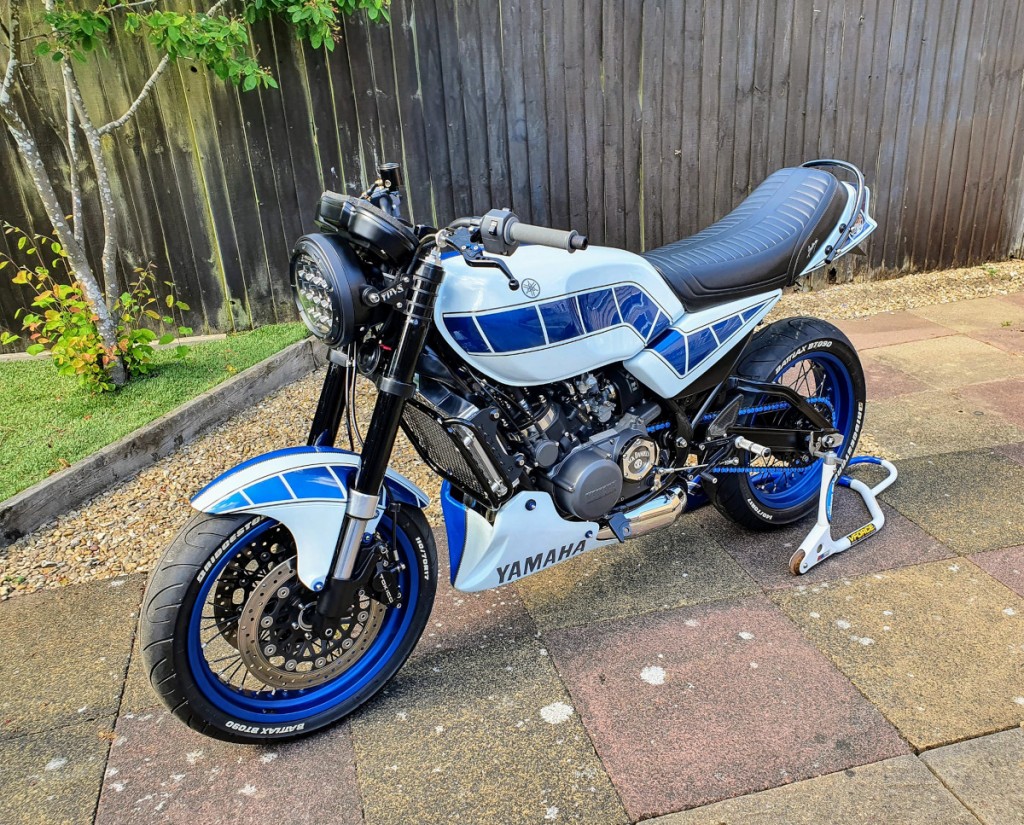 Suspension, brakes, and wheels were also given the treatment. The bike is now running a set of RGV250 forks and brakes, Metmachex custom swingarm, MT-09 rear shock, wire wheels, and more. Then there’s the paint — a double-sided “zipper” scheme that’s different on each side, making Andy’s RD like two bikes in one. It’s a bike you could drool over all day, but it begs to be ridden hard:

“The bike is an absolute hoot to ride. Second and third gear wheelies are no problem. Always have a grin when riding her.” Below, we talk to Andy for the full details on the build. My name is Andy Underhill, 54, but riding bikes since I was 16. Started off on Suzuki TS50ER before progressing to a Honda CB125 twin. Once I’d passed my test, my first big bike was a 1983 Yamaha RD350YPVS. Several more strokers came and went over a few years before moving onto a diesel (4-stroke) FZ750. This was bought as a cheap work hack but evolved into an obsession which 20 years later, you see here. Concept behind the design was to build my vision of a modern up-to-date LC, whilst keeping the retro style of the original 80’s icon. The bike is an absolute hoot to ride. Second and third gear wheelies are no problem. Always have a grin when riding her. Paintwork is the part the everyone comments on, then the wheels and exhausts.