The Chattahoochee Skunkworks pays tribute to a racing legend…

Some of the most iconic racing liveries in history came out of the heyday of tobacco company sponsorship, when the likes of Lucky Strike, Marlboro, Rothmans, and others supported Gran Prix racing on both two and four wheels. But one name continues to have an allure all its own:  John Player Special. Founded in 1877, John Player & Sons was a British tobacco brand that began supporting Team Lotus in 1968 and Norton motorcycle racing in 1971.  Within a few short years, the black-and-gold JPS livery was seared into the imaginations of motorsports fans all over the world. Our friend Toby Jones of north Georgia’s Chattahoochee Skunkworks was no exception:

“The famous photo of Colin Chapman standing beside a gold Lotus Esprit with the JPS private plane in the background just oozes class. A time in professional motorsports before tacky neon liveries became all the rage.” In 1985-86, the John Player Special Lotus was piloted by none other than Aryton Senna, who was destined to become a three-time Formula One champion before his untimely death at the age of just 34. Today, Senna remains one of the most beloved racing legends of all time — a man whose skill and class were in a league of their own. Toby, who’s long been a fan of both Senna and the JPS legacy, has made a name for himself building and restoring vintage Hondas, and he has a special affinity for the Honda CB400F. This winter, he took on a slightly smaller project:  a Honda CT70. The “Trail 70” has become hugely popular in vintage motorcycle circles, which got Toby thinking:

“The original game plan was to clean it up, get it running/riding correctly, and sell it for a tidy profit. Unfortunately, the little voice that lives inside my head kept asking: ‘Does the world really need another candy and chrome Trail 70 or do you want to have some fun with this one?'” Toby decided it would be an opportunity to pay tribute to Senna and what a legend he was.  Thus, the idea for a JPS CT70 was born. It’s running a set of CHP Motorsports upside-down forks, disc brake, extended alloy swingarm, an engine rebuilt by Cumbus Cycles, and much more. Below, Toby gives us the full story on what has to be one of the coolest pitbikes we’ve ever seen, and a lovely tribute to a racing icon. My name is Toby Jones and my little shop, which I affectionately call the Chattahoochee Skunkworks, is tucked up in the foothills of northern Georgia. For most of the year, the area is as good a motorcycle riding playground as you’re likely to find anywhere. There are, however, a few months when it gets too cold for all but the very hardy to swing a leg over a bike. These are the months when the propane heater in the shop gets fired up and we settle in on a nice warm project. The Honda CT70 aka Trail 70 was one of Honda’s most successful models and has become super popular in current vintage motorcycle circles. I did a full stock restoration on one a few years ago, and when a friend offered another CT70 project bike, we just couldn’t say no. The original game plan was to clean it up, get it running/riding correctly, and sell it for a tidy profit. Unfortunately, the little voice that lives inside my head kept asking: “Does the world really need another candy and chrome Trail 70 or do you want to have some fun with this one?” I had been thinking of a John Player Special themed project for quite a while. The black/gold John Player livery has always been a favorite of mine. The famous photo of Colin Chapman standing beside a gold Lotus Esprit with the JPS private plane in the background just oozes class. A time in professional motorsports before tacky neon liveries became all the rage. With this in mind, I blew the little Honda apart and sent it to the blaster to remove what was left of the candy blue. If you could ever call a motorcycle build whimsical this would be it. The non-original engine that came with the project actually ran, but not great and it was one of the three speed automatic units. There is a place in the world for automatic transmissions, but a motorcycle isn’t the place. My good friend Ken Cumbus of Cumbus Cycles came to the rescue on this issue. Ken totally rebuilt the stock engine to like new specs, and at the same time, converted it to a genuine one down, three up four speed. I usually do my own engines, but I knew Ken was the best with these little engines and his work did not disappoint! I turned to CHP Motorsports for one of their super nice upside-down forks with a disc brake. Also used one of their alloy extended swing-arms. The fairing was one I had had around the shop for several years. I liked the look but never quite came across a project that it “fit” on. I think it fits quite well on this one. Somewhere along the line I decided that a Formula One wing would be a good idea. Every Trail 70 needs an F-1 wing…right? I fabricated a small wing and a mount for the top of the rear fender. It carries the whimsical F-1 theme and also fills a void where the stock tail light would mount. Knowing that the bike would probably do pit-bike duty somewhere along the line, I chose to eliminate any lighting and also chose to keep the engine stock. Dependability and that famous Honda “one kick” starting took priority. The rest of the project involved a lot of cleaning, powder coating, making sure all the mechanicals were as new. Also spent a lot of time in the old paint shack laying down the black and gold. The weather hasn’t been cooperating so I’ve only been for a few short rides on the little bike, but everything checks out fine and I’m sure it’s going to be a fun one. I plan to ride it a bit and perhaps show it a couple of times, but there are other projects in the wings so if you want to have possibly the coolest pit-bike ever it will be for sale in the future. Senna Tribute: Honda CT70 John Player Special - The Chattahoochee Skunkworks pays tribute to a racing legend…  Some of the most iconic racing liveries in history came out of the heyday of tobacco company sponsorship, when the likes of Lucky Strike, Marlboro, Rothmans, […] Super Sport: Honda CB400F by Chattahoochee Skunkworks - A 400 Four “TT” from the North Georgia hills!  In 1975, Honda unveiled the CB400F, a middleweight four-cylinder four-stroke that stood out compared to the two-stroke twins and triples of its generation — machines such […] Chattachoochee Skunkworks: Honda CB400F Cafe Racer - Introduced in 1975, the Honda CB400F Super Sport is one of the most exquisite motorcycles ever to come out of Japan, a lightweight inline four with a 10,000 rpm redline, six-speed transmission, and quite possibly […] 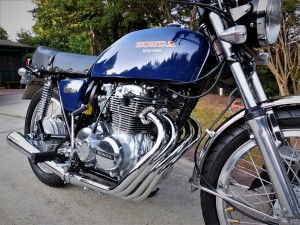 Best in Class: Honda CB400F by Chattahoochee Skunkworks - The Honda CB400F — aka the Honda 400 Four — was a lightweight inline four with 37 horsepower, a 6-speed gearbox (Honda’s first), svelte cafe racer styling, and one of the most beautiful factory exhausts […] Honda CB450 Restoration by Chattahoochee Skunkworks - The Sanitary White Honda CB450 Toby Jones and his wife recently moved from Florida to the foothills of North Georgia — one of the world’s motorcycling Valhallas. In honor of the famed nearby river, they […] 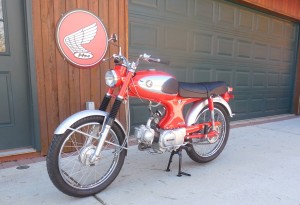 Honda S90 Restoration by The Chattahoochee Skunkworks - 1965 Honda S90 resurrected in the Georgia foothills… Toby Jones and his wife — “the artists formerly known as OtC Custom Motorcycles” 😉 — recently moved from Vero Beach, Florida, to one of the world’s […]