This is the motto of Crows Performance, a workshop in Nasukarasuyama City, Japan, run by our new friend Yoshiki Sawamura. Though they offer a wide range of services — from daily maintenance such as oil changes and tire changes to engine overhauls and full restorations — customs are their specialty.

The latest build to roll out of the shop is this ’83 Suzuki GS750GL. Launched in 1976 as a ’77 model, the GS750 was Suzuki’s answer to the CB750, which had already been on the market for seven years. The two-stroke era was coming to end, and Suzuki needed to offer a four-stroke, four-cylinder bike that could stand out from the competition…and did:

“Spotting a gap in the market, Suzuki created a machine that was more technically advanced than the class-defining CB750 (by featuring double overhead camshafts) in a more popular capacity class than the Z1/KZ (750cc vs 900cc), and sportier than the shaft-drive Yamaha.” —Motorcycle Classics Though the CB’s and KZ’s continue to garner the most attention today in vintage enthusiast circles, the DOHC GS750 was a real winner. So good was it, in fact, that Cycle Guide pitted the GS against a Kawasaki KZ1000:

“‘Who in his right mind would compare a 750 to a 1000?’ asked the writer, who then proceeded to show the comparison was more than rational, pointing out that on the quarter-mile drag strip, the Suzuki was only a half second and 2mph slower than the much larger KZ.” —Motorcycle Classics “Suzuki didn’t rip off the competition, though. They improved on it. Somehow, despite using what appeared to be the same forks, the GS750 handled much better. Where the CB750 and Z1 had some noticeable frame flex, the Suzuki was rigid, inspiring more confidence in the corners.” —Ride Apart The 1983 model you see here has special significance, as the owner’s father-in-law bought it new nearly 40 years ago! After inheriting the bike, the customer brought it to Yoshiki. Together, they decided to base the customization on an unexpected theme:

“The concept is indigo dyeing, a Japanese culture that has been passed down since the Edo period.” Nicknamed the “Indigo Racer,” the bike has been transformed into one striking machine, boasting a silhouette like we’ve never quite seen — but love. The factory twin-shock rear suspension has been replaced with a custom subframe, rear mono-shock setup, and hand-shaped rear cowl. The beautiful curved headers flow down into a custom 4-into-2 exhaust setup, which must sound incredible at full song.  The tires are vintage-style Adlert Classics, which won’t have the road-holding power of modern sport tires but probably perform better than anything available in 1983. All in all, this “Indigo Racer” melds the European cafe racer style with Japanese soul — just as Yoshiki intended:

“It is a custom that incorporates Japanese culture into European style.” Below, we talk to Yoshiki for more details on the build. This was a request from an individual customer. The customer inherited this bike from his wife’s father, who bought it new in 1983. The concept is indigo dyeing, a Japanese culture that has been passed down since the Edo period. A lot of work on the rear subframe, as you can see. The twin-shock rear suspension was changed to monoshock. It is a custom that incorporates Japanese culture into European style. 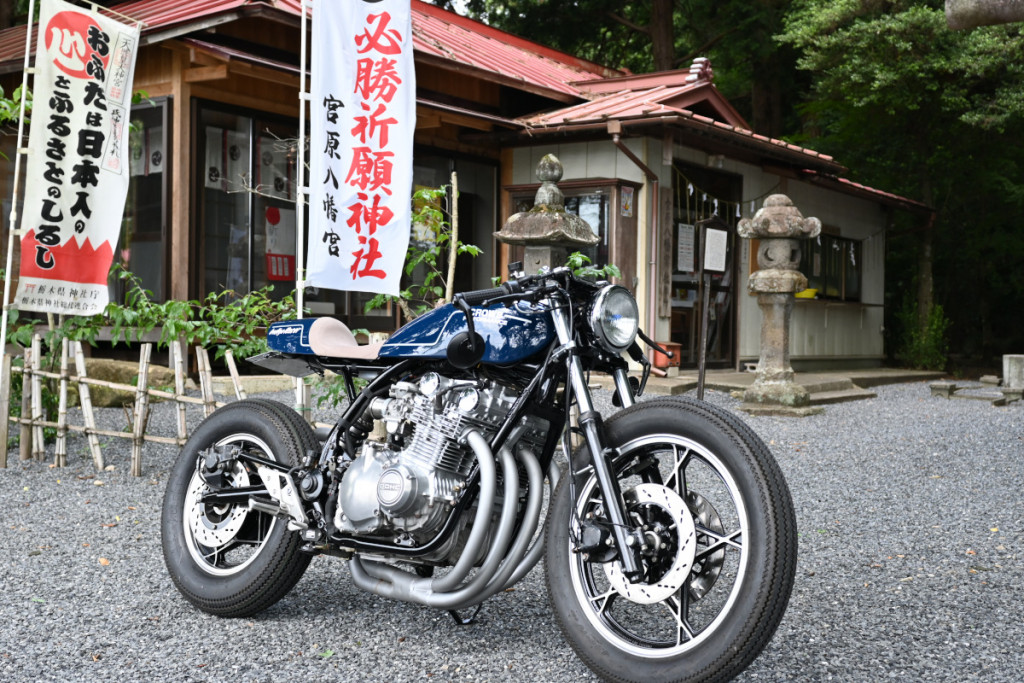