In production since 1957, the Harley-Davidson Sportster may not seem like the first choice for a scrambler build, but this air-cooled V-twin cruiser has proven itself to have surprising potential as a heavyweight, multi-cylinder dirt-eater. Biltwell and others have successfully modified and raced Sportsters in the NORRA Mexican 1000, Mint 500, and AMA National Hare and Hound races. Meanwhile, Carducci Dual Sport has built a race-ready Baja 1000 Sportster, and the boys at Rusty Butcher have proven that Sporties can indeed fly, jumping theirs on motocross tracks around California.

Our friends at Burly Brand now offer 1″ Scrambler bars and 15″ Stiletto shocks, TC Bros has a full list of the parts they used for their budget Sportster scrambler build, and Traxxion Dynamics has a fork conversion kit for 5.5″ or 7″ of travel.

Below are some of the Sportster scramblers we’ve featured here on BikeBound.com. 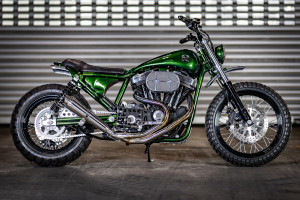 Makassar Monster: Harley-Davidson XL1200 Sportster - A “Naked Tracker” from Indonesia’s Tiba Tiba Garage…  Since 1957, the Harley-Davidson Sportster has remained one of the world’s most highly customized motorcycles. With the big V-twin engine and less weight than larger H-D machines, […] Harley Enduro: XL1200 Sportster “Adventure Sport” - Jake Vintage builds a 70s enduro-style Sportster for city and trail…  In 2020, we featured one of our favorite bikes of all time, a 1936 Norton V-Twin Special powered by a monstrous 1320cc J.A.P. V-twin […] 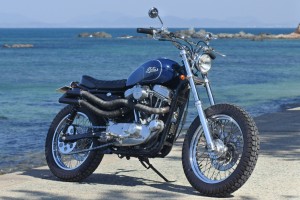 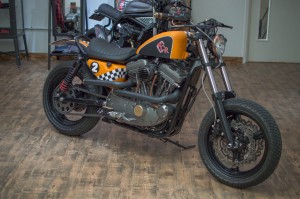 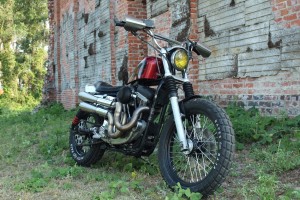 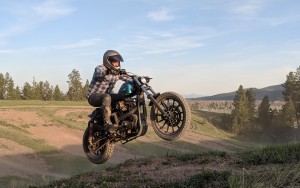 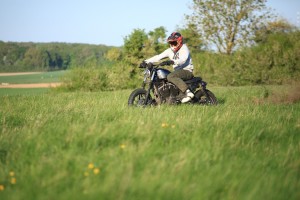