The Harley-Davidson Sportster has long been one of the world’s most popular bikes for customization. We’re seeing a lot of Sportster scrambler builds these days, but the idea isn’t exactly new. After all, a 1969 XLH scrambler starred in the 1969-70 TV series Then Came Bronson and a custom Sportster, “Harley’s Comet,” finished fourth in the 1986 Baja 1000!

Enter Fran Manen, the mountaineer-turned-builder behind Lord Drake Kustoms, who wanted to create a series of Sportster scramblers that truly stood out from the crowd:

“As always, we have two rules at Lord Drake Kustoms to which we remain loyal: ‘Always make different bikes’ and ‘Nothing is impossible’. These motorcycles are proof of that. We were tired of always seeing the same custom bikes, and especially the same Harley-Davidson scrambler.” Today we have units 1 and 2 of a limited edition of 10 units that LDK is building out of their Malaga-based workshop, nicknamed the Soulbreaker series. Currently, the first unit (Soulbreaker Green), is circulating the roads of Austria and the second unit (Soulbreaker Red) went to London. “Lord Drake Kustoms ships motorcycles worldwide, so you can order yours right now and choose the colors, numbers or side graphics and some other details of this limited series of 10 units, Only 8 units left!” 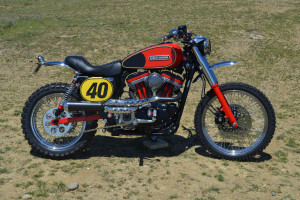