Many of the early cafe racers built in post-war England were of Triumph Engineering manufacture, founded in Coventry in 1885 and later based in Meriden. In the 1980s, after the original company went bankrupt, Hinckley-based Triumph Motorcycles Ltd obtained the rights, becoming one of the biggest motorcycle manufacturers in the world. Both the vintage Meriden and modern Hinckley machines are popular platforms for Triumph cafe racer builds. Below, we have a range of our favorite such builds. 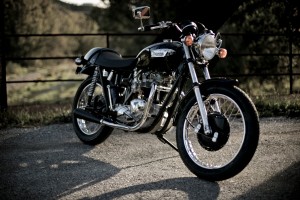 Black Bonnie: Triumph T120 Bonneville by MJH Performance Bikes - In 1971, Triumph introduced a new oil-in-frame Bonneville, whose steel chassis held the bike’s oil in its 3-inch diameter backbone instead of a separate oil bag. These “Oilers” would also get a 5-speed gearbox, a […] Video: Dirty Thruxton R Woods Ride! - ﻿ Friend of the blog Sean White (@fast.for.fun) has a penchant for off-road antics on his 2016 Triumph Thruxton R. Last time we saw him, he was doing ice wheelies on a frozen lake near […] “Crazy Bonnie” Street Dragster by FCR Original - A lot of the customs we see look great, but are rarely put to the test on the road or track. Not so with “Crazy Bonnie” — a 2006 Triumph Bonneville street dragster that recently […] Triumph T100 Cafe Racer by Stuntex - It’s tough to think of a more versatile modern platform than the Triumph Bonneville.  Nick Kazakov of Podolsk, Russia, and the team at Stuntex Club decided to create a modern cafe racer out of a […] Triumph Thruxton Cafe Racer by DMOL - Death Machines of London (DMOL) has to have the best name in the business. Founded by designer James Hilton and engineer Ray Petty, their debut build was this incredible Moto Guzzi Le Mans “airtail” cafe […] Modern Triton Cafe Racer by Britalmoto - Recently, Ivo Tschumi of Switzerland’s Britalmoto blew us away with his “Robe Tracker,” a Triumph Thruxton Tracker he built while recovering from a high-side at the track. Now Ivo is back with a modern Triton […]