The Yamaha Virago, introduced in 1981, was the company’s first V-twin cruiser. While the XV750 version is the most common, the bikes were offered in a vast range of sizes over the years, including the Virago XV250, XV500, XV535, XV1000, XV1100, and the XV920R. It was Classified Moto of Richmond, Virginia, who popularized the Virago as a custom platform, discovering that the monoshock design of the pre-’84 bikes lends itself readily to building a cafe racer. Below, we have a selection of Virago cafe racers Know Thyself: Yamaha XV750 Cafe Racer - Polish engineer builds one unique Virago 750…  In Latin, the phrase nosce te ipsum means to “know thyself.”  This maxim was inscribed on the ancient Temple of Apollo, and writers, philosophers, poets, and luminaries over […] 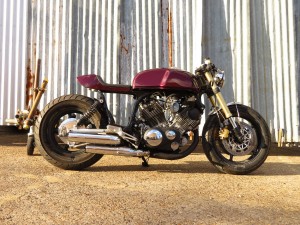 Virago 920 “YamaDuci” by Augment Motorworks - A Japanese-Italian love story… The Virago series was Yamaha’s first entrée into world of V-twin cruisers, and one of the first motorcycle mass-produced with a monoshock rear suspension. It was a bold move for Yamaha […] WKND Virago: Yamaha XV750 by De Stijl Moto - A JDM-inspired Virago from Portland… Introduced in 1981, the Yamaha XV750 Virago was the company’s first foray into the market for V-twin cruisers, featuring mono-shock rear suspension, shaft-drive, and an air-cooled 75° V-twin producing 55 […] Art of the Possible: Virago XV920 “Alpha” by ASE Custom motorcycles - The Yamaha Virago was the company’s first series of V-twin cruisers, featuring 75° air-cooled engines with shaft drive and mono-shock chassis. From 1981-1983, the Virago XV920 was the top of the line, offering a 920cc, […] Handbuilt in Texas: Jackson 5AM V2.0 - “We don’t build custom Yamahas, Hondas, etc. We build Jacksons.” The XV750 Virago, launched in 1981, was Yamaha’s first entry into the V-twin cruiser arena. It was a slightly funky machine, with an air-cooled 75° […] Yamaha Virago 750 “GTS” by 074 Customs - When Yamaha engineers were designing the XV750 — aka the Virago 750 — they surely didn’t realize that this funky V-twin cruiser — Yamaha’s first! — would be resurrected as a cafe racer some forty […] Yamaha Virago 250 Cafe Racer - Some of our favorite builders started as racers, and Matt Fuller of Land O’ Lakes, Florida, is such a one.  A supermoto and flat-track veteran, he brings a purpose-driven focus to this ’97 Yamaha XV250 […] 1981 Yamaha TR1 by Fast Sally Customs - In 1981, Yamaha introduced the 920cc Virago XV920R, marketed in Europe with slightly larger displacement (980cc) as the TR1 and also the XV1000. It had the mono-shock suspension that has made the Virago series so […]