We are pleased to present this 1980 Suzuki GSX750 16V, “La Suzu,” built by Mauro Lorusso of Triple Ocho 888 Garage, a custom bike builder in Argentina.  The bike immediately jumped out at us with its big, muscular lines and brat-tracker style, and we’re always interested in atypical bikes coming out of atypical locales.

The GSX750 (Katana in the United States) was introduced in 1980 as an upgrade of the 8V GS Series, which was Suzuki’s version of the UJM (Universal Japanese Motorcycle).  The GSX enjoyed four valves per cylinder instead of two, and Suzuki’s Twin Swirl Combustion Chamber (TSCC) technology. In 1980, the liter version of the bike, the GSX1100S, was claimed to be the fastest production motorcycle in the world.  The 750cc version, seen here, made 79 horsepower at 9200 RPM and weighed 504 pounds. 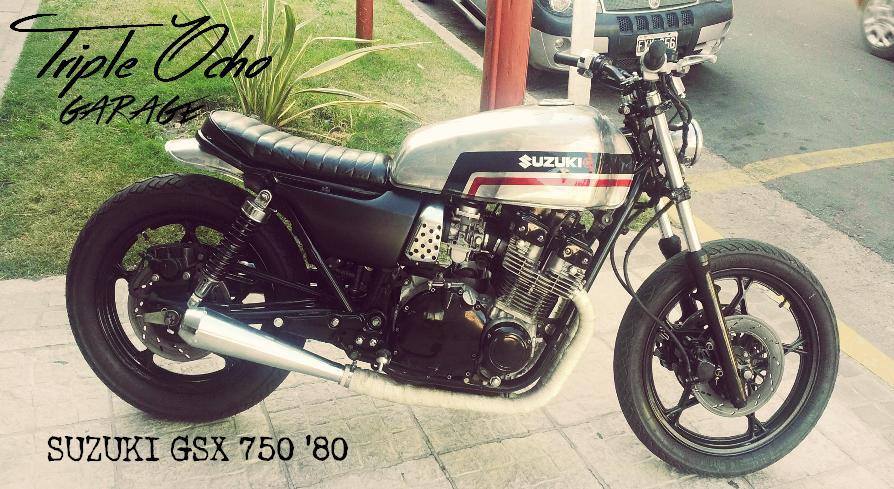 Due to some language barriers, we were not able to secure quite as many details on this build as we normally do.  However, we can provide some specs:

You can follow the build via pictures through the Triple Ocho Garage Facebook page. The bike may not be the most radical build, but the lines are just right. The wide, uptilted moto-style bars look almost evil–in the best way possible–and the silver tank is reminiscent of the exposed aluminum skin of an early jet fighter or P-51 Mustang. The side covers look clean, and their presence keeps the bike from having that hollowed-out look that you sometimes see when the battery/wiring is removed from this area. One great thing about that slab, brat-style seat is that you could actually ride two-up on this custom.