Summer is almost here, and the crew at 85 Motorcycle Art has the right idea with this beach-inspired DR650 custom. Here at BikeBound, we’re suckers for dual sport customs. It’s hard to beat the versatility and durability of a big single thumper, and such bikes make great scoots for navigating the urban jungle and odd trail. Even better when the bike looks as good as it goes, which is certainly the case here. Builder Mário Patrício fills us in with the details. 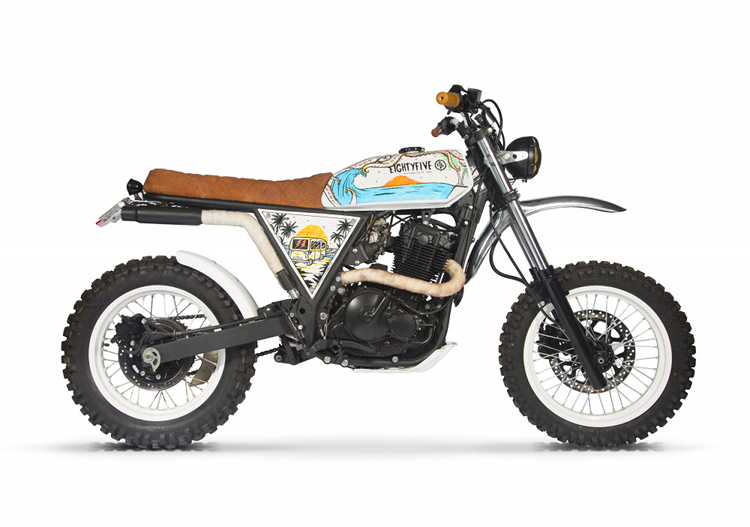 The project is based on a 1993 Suzuki DR650. It all started with a friendly conversation between Mário Patricio, owner of Portugal’s 85 Motorcycle Art, and his friend Gil Francisco, who had an idea to customize a motorcycle to take to the beach.

After a lot of drawings and scribbles, Mário and Gil finally managed to dream up a concept that started them down the path of customization.

The subframe was built with 25 mm steel pipe to give the bike a muscular look. The fuel tank is from a Portuguese motorcycle known as the Sachs Fuego. The rear wheel is 17-inch, and the front wheel is 18-inch, both running Pirelli rubber. The seat was made by hand in leather.

What really sets the bike apart, as a truly peculiar and amazing piece of work, is the hand painting by

The amazing and peculiar result for this motorcycle, was the combination between the choice of special parts and an spectacular work of an hand painting by an artist known as “Xsamuellucas.”

“Gil Francisco doesn’t look for high speed, just a motorcycle that gives him some pleasures and that identified with himself and with his personal liking as waves, music, wheels, surf and motorcycles.”