The Honda NX650 Dominator has become a favorite platform among custom builders. Available from 1988 to 2000, the 44-horsepower dual sport is largely bulletproof, with respectable performance both on and off-road. The lines of the chassis lend themselves to tracker and scrambler builds, and the dual headers from the air-cooled single enhance the performance look. Enter Hans Hüberli of Switzerland, who has built 28 custom bikes over the past 45 years — many of them single-cylinder Honda and Yamaha builds — long before these were popular bikes to customize. Hans does all of the work himself out of a small garage, with only hand tools, and says he does most of the work outside, as the space in the garage itself is limited. Some of his builds were far ahead of their time, such as his custom Yamaha Tenere builds, built when few people were customizing these types of bikes. Of course, Hans, like all Swiss custom bike builders, must operate within the country’s strict regulations, which forbid cutting the frame. Of course, such limitations often spur greater creativity and ingenuity. Below, we get the full story on this garage-built Honda NX650 scrambler. My name is Hans Hüberli and I have been customizing motorcycles for 45 years. I have built about 28 bikes over those years, mainly 1-cylinder 4-strokes, Yamaha and Honda. I do all the work myself:  designing, welding, painting, rebuilding, or fabrications of parts. I do not have a big shop, only a small garage, and only handy-man tools. No lathe, no painting booth. I work mostly outside of the garage because inside I do not have the space for it. All the custom work I have done was in my spare time. I worked as a window-dresser all my life. All the bikes that I did, I have built for myself. I never worked for a customer. My goal was always the bikes had to look factory-made and street legal and I wanted to do it my way. I always wanted to build a old skool scrambler with electric and kickstarter. There was no concept at all. I just check what I have in my garage that I can use and then I start building.

I’m proud that the result looks completely like it came like that from the Honda factory. And of course no cutting to the frame, because Switzerland has very tight regulation — I wanted it to be street legal. 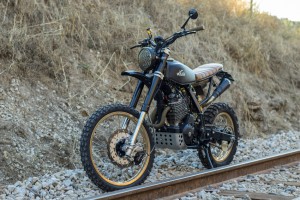