At this year’s Handbuilt Show, we were lucky enough to catch up with one of our favorite builders, Cliff Fisher of Stasis Motorcycles.  Cliff is a garage-builder with a full-time IT job, two growing boys, and three house renovations…yet somehow, he turns out such incredible builds as the modern Triumph desert sled and Moto Guzzi G5 cafe racer we have previously featured. 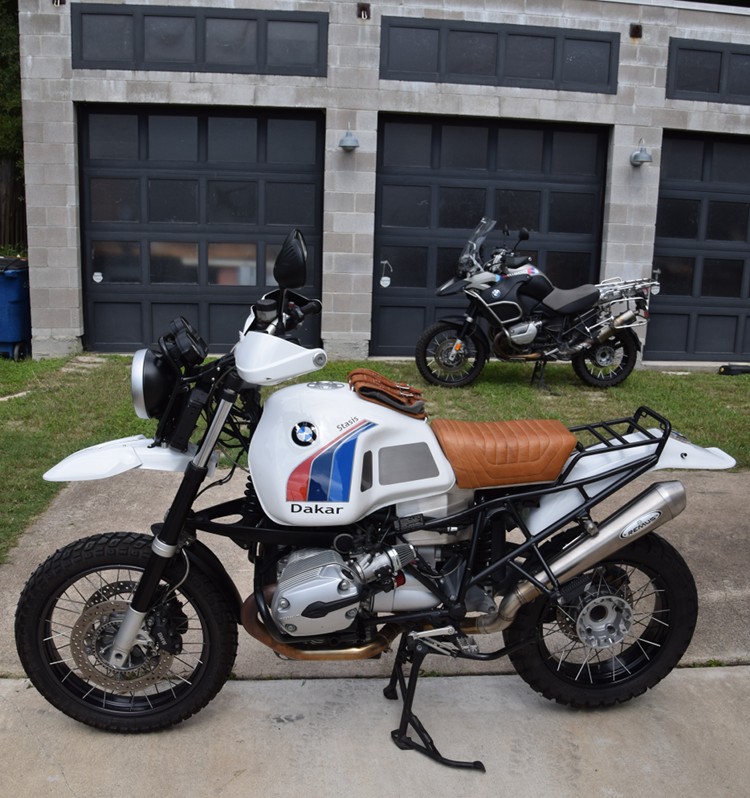 Now Cliff is back with this incredible BMW R1200GSA custom, inspired by the Paris Dakar rally bikes of old. Cliff admits that he has a nearly lifelong obsession with these machines, and he conceived of this bike as a retro daily rider. Below, we get the full story on this go-anywhere custom. Still just a dude in a garage building bikes. Although there is much more on my plate these days with two growing boys, renovation of three houses, and a full-time job in IT.

This means that I am the slowest builder in the world…and this project like most of mine has been in the works for three-plus years, alongside a few others. My primary ride for the last four years has been a 2009 BMW 1200GSA, which I’ve become convinced operates on magic alone, seeming to defy the laws of physics when in motion. Despite its weight and size, the GS is such a nimble, capable platform that I chose to create a retro-daily rider that was both practical and unique, based on this frame.

This idea evolved back in 2013, before BMW had introduced their R9T Scrambler, before Unit Garage had created a ‘retro’ kit and well before a couple other recent builds using this same tank on an R9T platform had begun. The primary difference is…mine is still a GS. I’ve had an unhealthy obsession with Paris Dakar Rally bikes for 20 yrs, based on their ability to carve up pavement and dirt in equal shares. I’m so obsessed that, with the exception of the Stasis Guzzi, all I own are dual-sports. So it was a natural decision to build as close an approximation to the original R80GS Paris Dakar air-head as possible, with the power and modern features of an oil-cooled GS.

As with all Stasis builds, the GS is a combination of modern and vintage components, and in this case a combination of BMW GS parts. I was able to source an original R80GS Paris Dakar tank, an R100GS front fender, R100GS rear rack and NOS Husqvarna CR350 rear fender like so many vintage BMW GS owners have installed. The greatest undertaking in this build was mating the R80GS PD tank to a new sub-tank that runs over the mass of electronics, ABS and fuel injection, down into the space the airbox used to occupy and back up beneath the seat and surrounding the new battery location. As I wanted to leave the OEM GS Adventure suspension untouched, we gave up volume beneath the tank to allow room for the front swingarm to rise beneath it. Since I didn’t want to diminish this long-range tank to a facade, I cut the OEM airbox out of the frame to use that space, as well as the area beneath the seat to regain another 5 gallons of volume. That along with the newly fabricated underside, totals over 8 gallons of fuel…which is nearly the original capacity of both the GS PD and the r1200GS Adventure. Needless to say, the tank is massive, but the last 5 gallons sits low in the frame, giving this GS a far lighter feel than the OEM Adventure.

Another modus operandi for Stasis is to use parts from other models of the same make as often as possible. While I did employ a headlight/fender mount from Unit Garage, which is part of their R120GS kit, Zach fabbed up mounts for an R9T headlight and the additional space behind the headlight was utilized to mount a pair of R1200C split Oil-Coolers. The R100GS rear rack was welded to the existing rear subframe, and a rear hoop with matching luggage loops was added for closure and support of the vintage Husky fender. Mounted to that fender is a taillight cut from acrylic on a waterjet, combining a red LED ring recessed from below, surrounding a BMW roundel recessed into the surface of the acrylic from above. Signals are subtle pin-units from MotoGadget that are amazingly bright. The other handmade bits are the seat, sculpted and stitched to match the pattern of the original R80GS saddle, and covered in a butterscotch leather by Russell of ElevenATX as well as a tank bag designed by Russell that combines the same leather with waxed cotton and straps to the luggage hoops Zac welded to the tank. A matching rear tool bag is in the works to reference the original R80 Paris Dakar tool bags. Lastly, the paint. I wanted to acknowledge the very iconic original paint schema from the R80GS Paris Dakar with a subtle update. The stripes are separated by brushed, bare steel pin-stripes and brushed knee pads show through the clear-coat executed by Josh Trevino of Trevino Customs. Exchanging the Paris for ‘Stasis’ in the Dakar graphic, and I’ve built my dream bike!

This is really the original Adventure bike remade on a modern platform.

I’m most proud of the extended team that makes Stasis Moto and the way we adapted such a recognizable vintage tank to the modern platform. That coupled with the re-imagined seat really set this build off for me. The Stasis Dakar BMW R1200GS - At this year’s Handbuilt Show, we were lucky enough to catch up with one of our favorite builders, Cliff Fisher of Stasis Motorcycles.  Cliff is a garage-builder with a full-time IT job, two growing boys, […] Modern Triumph Desert Sled: Stasis Scrambler 900 - At this year’s Handbuilt Show, we were lucky enough to discover the work of Cliff Fisher, the man behind Stasis Motorcycles.  He simply blew us away with his “Stasis Scrambler 900,” a modern incarnation of […]