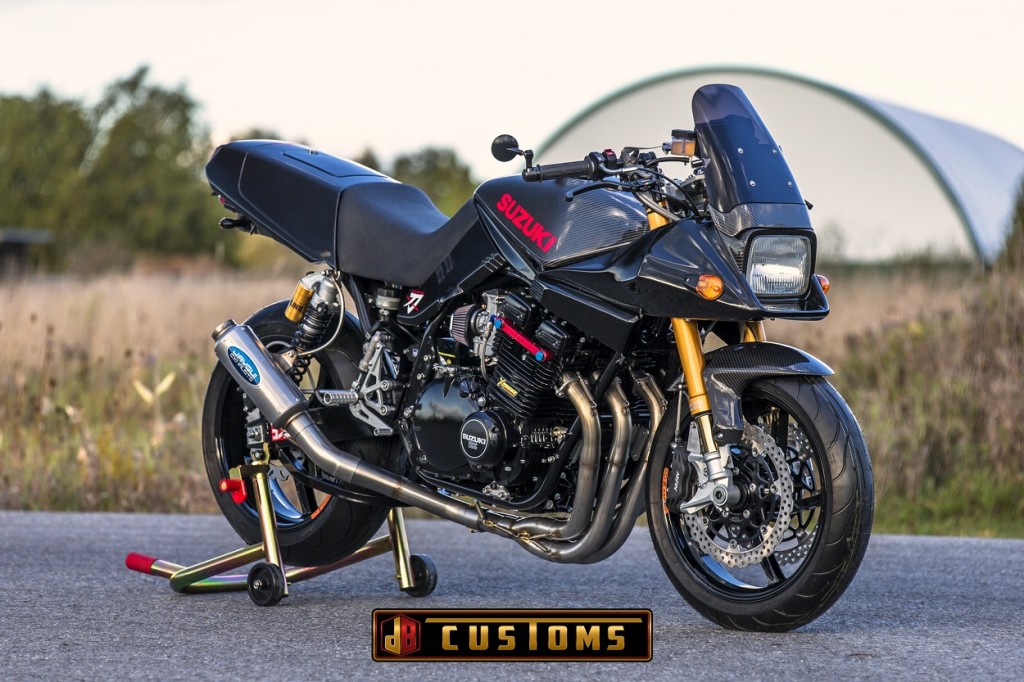 Darren Begg of dB Customs has quickly established himself as a leader in world-class restomod builds.  His builds often retain the original silhouette and paint scheme of the original, while upgrading the powerplant, suspension, brakes, and switch gear. The result are high-powered icons of yesteryear, brought fully into the modern age — the true spirit of the restomod. Now dB Customs is back with a 1260cc Katana 1000, clad with carbon fiber and offering a 173-hp GS-E motor built by Ray Mancini of Xtreme Motorsports. Below, we get the full story on this staggering build. Our company, dB Customs, has been building boutique restomod motorcycles for their customers since 2015. Our workshop is fully equipped with welding and machining facilities for custom fabrication, and vapor blasting for restoration and finishing of various parts and components (for both in-house builds and other customers parts).

The bike is a 1982 Katana 1000 that has received a Ray Mancini built (Xtreme Motorsports) GS-E engine transplant. The engine was bored to 1260cc and with Ray’s head work and other modifications, it dyno’d at 173hp and 110ft-lbs of torque at the countershaft. Our customer from Arizona had been following our work, loved our style, and so contacted us and asked if we were interested in building a high end Suzuki Katana restomod. This was a bike I always wanted to build and so already had some ideas in mind for the project. We wanted to incorporate some carbon fiber features on the bike (front fender, tank cover, rear seat cowl) and use hints of red highlights, such as the Suzuki logo on the tank and rear cowl. In addition, we used all of the standard components that dB Customs are known for including in their builds, such as Brembo brake levers, OZ Racing wheels, Dyna ignition, JayGUI Racing exhaust, and OHLINS suspension all around. A rear swingarm from a Suzuki Bandit 1200 was used and adapted to the Katana with custom pivot axle spacers and rear shock mounts for the twin OHLINS. A custom bent underbrace was welded onto the swingarm along with reinforcing pieces to add some rigidity to it. Custom spacers were made to center the rear OZ Racing wheel with 180/55-17 Michelin Pilot Power 2CT tire, along with a custom rear brake stay bracket. All paint work was completed by our amazingly talented guys over at Sketches Ink (no vinyl decals, all paint). All the switch gear was upgraded to modern units from a GSXR1000. One may classify the bike as a street fighter, however I prefer the term Restomod because we kept the original paint scheme of the original Katana while modernizing the suspension and brakes, which to me is in the true spirit of a Restomod.

Everything about this bike just flows together so well, it’s hard to pick just one thing. I feel that the minimalistic approach we took, with the carbon and red highlights, gave us that “less is more” result. All photos by Darren Begg