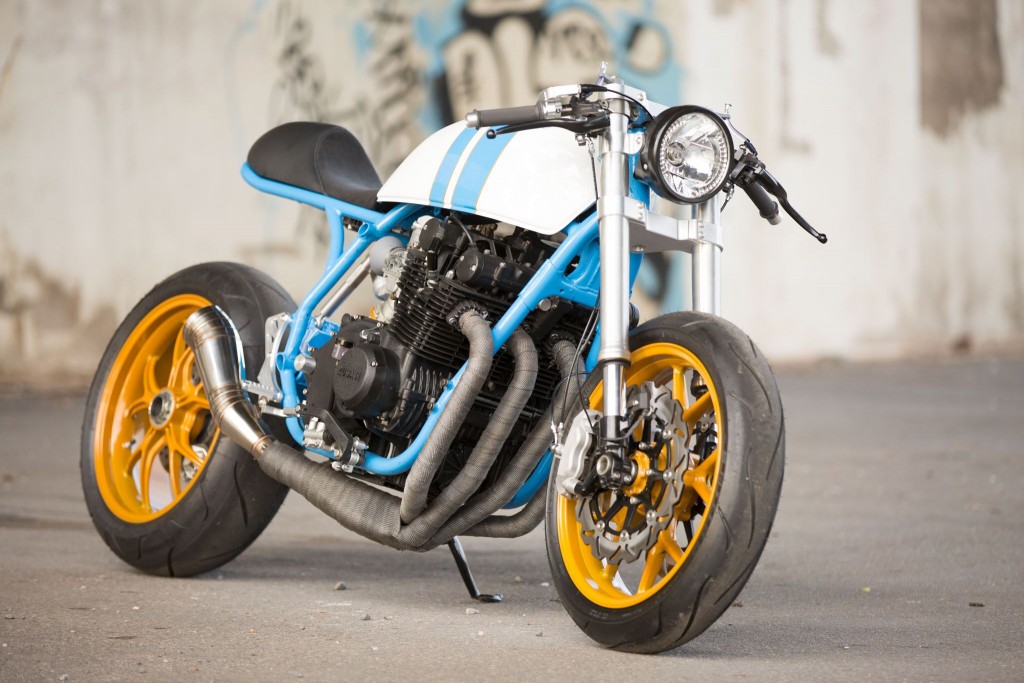 The Suzuki GS750 was the first four cylinder in the venerable GS series — the company’s first full-fledged foray into four-stroke motorcycles. At its release the GS was the fastest of the 750cc fours on the market. The air-cooled, 60.7 horsepower inline four would serve as the model for Suzuki fours until the introduction of the GSX-R. While that 750cc motor still offers a double wallop of power and nostalgia, the rest of the bike has not aged so well. Enter machinist Justin Page, who decided to mate the single-sided swingarm and wheels from a 2008 Ducati 1098 to the GS750 motor. The result is the “Zucati,” which was featured at the 2018 Handbuilt Show in Austin, Texas — one of the most prestigious motorcycle shows in the world. After seeing the bike in the show, we reached out Justin for the full story on this staggering build. Tell us you, your history with motorcycles, and your workshop.

My name is Justin Page, I am a machinist by trade. As far as history with the bike, I’ve owned it almost two years now. I got it just to do this build.
I do most of my work out of my 2 car garage minus the machining. The main bike is a 1978 Suzuki GS750 that contains motor and front half of frame. The wheels and swing arm and rear suspension is from a 2008 Ducati 1098. I built it for myself although it will be for sale to build another. Everything started with that rear single sided swing arm and the whole bike came from that. Custom parts -0 triple trees with built in speedo, stem, 3d printed reservoir mounts, headlight mounts and headlight lens, rear subframe, seat with led light under material, rearsets and pegs, also converted the cable pull cluch to a hydraulic slave cylinder and machined the side mounting plate to house it all. I’m sure I’m leaving things out, and of course spacers, bar ends, etc…. My fav on the bike is the clutch conversion and the rear tail light in the seat.