Beta motorcycles, built in Italy, can trace their origins to a bicycle maker founded well over a century ago in Florence. In the 1970s, the company began focusing on off-road motorcycles, gaining a reputation for their trials models. Then, about a decade ago, they launched their RR series of performance-minded enduro and motocross machines, utilizing their own power plants. The Beta 350 RR Factory Edition is their race-spec 350 enduro, a 231-lb machine developed with input from the official Beta factory teams — a true off-road weapon. Enter Max Ingelrest, the founder of HIDE — a small workshop based in an old distillery outside Brussels, Belgium. Says Max of his work:

“The bike is for me the ultimate object in customization and passion.” Amen, brother! Previously, we featured HIDE’s Honda Transalp tracker. Now Max is back with “The Meta” — a street-legal custom supermoto built from a 2013 Beta 350 RR Factory Edition, utilizing such wide-ranging components as a Yamaha XT tank and skateboard deck seat pan. Below, we get the full story on this enduro racer turned street weapon! Created almost five years ago, HIDE is a small workshop located in Belgium, a few kilometers from Brussels. I came to bikes in search of rock & roll. The idea is to make a boring object a visually beautiful thing, with a patina and soul. The bike is for me the ultimate object in customization and passion. Customer project, and because these kinds of bikes are my fav! Two wheels / one engine / tank / seat – let’s go! Wanted to build around the XT tank, knowing that I’ll work with a skateboard for the sub frame. Converted the bike for the road with beautiful parts for the rest. 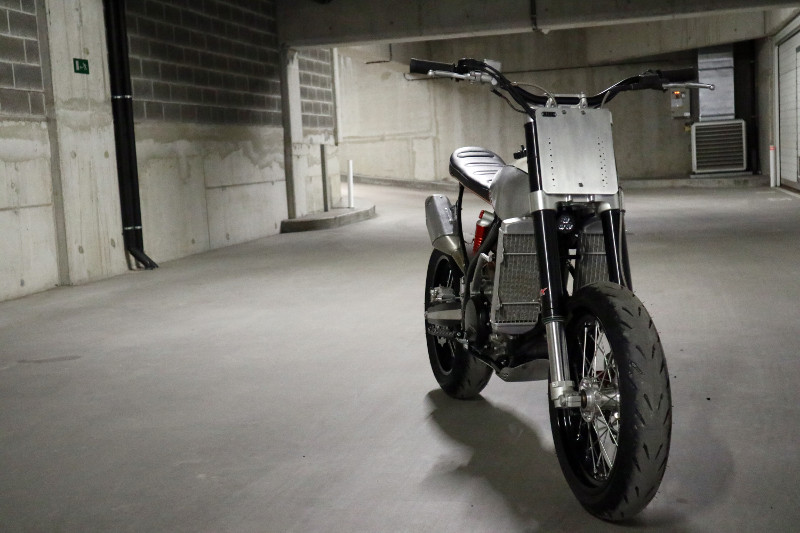 I call it “The Meta.”  Reason: its first name was Beta, and the new owner’s company is called MetaSystem. Hard to say. We could invent one! Why not Super Tracker? I’m proud to see this babe alive and happy when I put my ass on it!

Seriously, I’m proud to have had the confidence of the owner to be able to do what I wanted and have the opportunity to work on a project that I loved to do and see evolve.