In 2018, Royal Enfield introduced the Interceptor 650, an air/oil-cooled parallel twin with Bosch fuel injection, slipper clutch, frame-mounted oil cooler, and a solid 46 bhp on tap. Known here in the USA as the INT650, the bike has received positive reviews:

“While the marketing material shows this bike riding along the California coast—hinting at the target audience of youthful road trip warriors—the plucky 648cc parallel twin can fit in anywhere the daily grind may take you: country back roads, urban sprawl, or freeway stretches. ” —Cycle World Enter our friends Jerome and Yvan of France’s Le Motographe, who’ve been off-road riders and racers since boyhood — experiences that influence their builds. In 2019, we watched them race their Yamaha WR450 “Skeleton” in the Punk’s Peak sprint race, Deus Swank Rally, and El Rollo flat track race in the same week, switching out wheelsets and sprockets between each competition. “These parts are specially designed and manufactured in our workshop to be ready to bolt on the stock Royal Enfield 650 without any modifications, to allow RE650 owners to turn their bike into an adventurer in a couple of hours.”

What’s more, the team also provides a “ready to ride” full build service, in which they customize new Royal Enfields to their clients’ specs. The “Californian Scrambler” you see here is an example of this service, developed for a client who wanted a classy beach scrambler. We’re especially smitten with the full stainless steel exhaust — the best such exhaust we’ve seen on a new Enfield. Below, we get the full story on this Californian Scrambler!

RE650 Scrambler: In the Builder’s Words As you know, we worked over the past months on many Royal Enfield 650 Interceptors, designing and building different custom parts ready to bolt onto the bike, which can be found on our website: www.atelierdumotographe.com. We also provide a full service build, with even more custom options, which allows a client to directly receive their brand new bike customized just as they desire, ready for adventure and built in our workshop specially for them. This is the last Royal Enfield 650 built in our workshop. The Californian Scrambler, built on request, is an example of the “ready to ride” service we provide to our customers, including a brand new Interceptor + all of our parts from us they need + other custom options (painting, full stainless custom system, handmade aluminium leg protection, phone and GPS charger, etc.)

We called it Californian scrambler because of the inspiration colors, with this blue lagoon and all the chrome, aluminium wheels, etc. The client is in France and really wanted something that looked like a classy beach scrambler.

On this project we did this iconic stainless full exhaust system, the aluminum plate for protecting the legs, and added many of the adventure parts designed for the Royal Enfield 650 available on our website:

And also products from our partners, like the brake lights and turn signals from Kellermann, tyres from Heidenau, and luggage from Longride! Sounds Like Thunder: Harley Dyna Street Bob - Le Motographe builds a 40/50s-inspired Dyna…  The Street Bob is a stripped-down ground-pounder inspired by the H-D bobbers of yesteryear.  The 2015 Twin Cam 103″ V-twin was rated at 98.8 foot-pounds of torque, and despite […] Rally Beast: Yamaha WR450F by Le Motographe - True to Form: Le Motographe builds a race-spec custom rally bike… The founders of France’s Le Motographe, Jérôme Mawois and Yvan Bertona, may have backgrounds as a product designer and metallurgist, respectively, but the pair […] 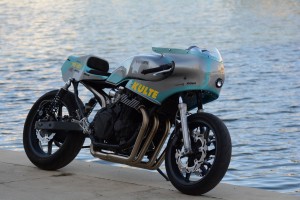 Custom Enduro: Yamaha WR450F “Skeleton” by Le Motographe - Extreme Scrambler: Yamaha WR450 from France… Introduced in 2003, the Yamaha WR450F is essentially an enduro version of the company’s full-blown motocross racer, the YZ450F. As such, the WR offers a wide-ratio gearbox, headlight/taillight, electric […]