It’s no secret that we’re big fans of two-strokes here at BikeBound HQ, and it seems we’re not alone — several of our Top 10 Customs of 2020 were smokers. So we decided to follow up with a two-strokes-only list. Bikes which made one of earlier Top 10 lists do not qualify, or else builds like Bullet Bob Moto’s IT200 Twins or Wilco Lindner’s RD125 — among several others — would have made the list. Without further ado, here’s our list of the Top 10 Two-Strokes of 2020, in alphabetical order by builder: Germany’s Peter Abelmann is a lifelong motorcyclist, restorer, and collector who quite literally wrote the book on Yamaha two-strokes in German: Yamaha Zweitakt. In 2019, we featured his 1984 Yamaha “RD380” YPVS cafe racer, and he returned in 2020 with what may be the only 1968 Yamaha DT-1 officially imported to Europe. “I always call these kinds of bikes “tractors” but this DT1 is special — because it is the first of a long family of off-road bikes!” Peter found the bike through a Belgian member of Yamaha-Enduros.com with only 400 kms on the clock! Apparently, the bike was specially imported for a former tennis star who’s since deceased, so details are scarce, but the speedo is on the kilometer scale, so it’s not a US model. Though the mileage was low, the bike had been improperly stored in the past, so Peter set out to restore the bike, careful to preserve as much of the original charm as possible. “I am proud that I managed to bring the bike back to life without destroying the original patina!” Brice Augry of AG Custom Motorcycles says his passion for motorsports comes from his father, who was a Renault R8 Gordini driver in the 70s and 80s. Brice studied motorcycle mechanics for five years and has been involved in two-stroke drag racing, the 24 Hours of Barcelona, and now has his own workshop building custom bikes. He started this build in 2016 after attending the Wheels and Waves festival in Biarritz: “The concept of my Aprilia was to make a mix between a sport bike from the 80s and a 2-stroke GP.” Sadly, Brice lost his mother during the process, which ground the build nearly to a halt. In the end, however, he decided to finish the build in her honor: “My motorcycle’s nickname is LA MAMA, in tribute to my mother of Italian origin.” And what a motorcycle it is! The bike has the look of a road-legal GP racer, complete with carbon fiber monocoque bodywork and a tricked-out engine, now displacing 154cc and producing something in the neighborhood of 40 horsepower! Alex Krill from Denver, Colorado, grew up around the race track, watching his parents race a BMW 1600. At 19, he bought a basket-case Vespa: “I restored it and from there the addiction was real. I haven’t ever really stopped. I always worked out of my garage until about 6 years ago.” Alex opened A.K. Cycles, a full-service restoration and custom shop. He’d had this ’71 T500 sitting around for a few years: “When I got this thing it was a frame with a seized motor. It looked like it had been sitting at the bottom of a lake. It’s always fun to see something so haggard brought back to life.” After being selected for The Greasy Dozen show, he got to work: “My whole idea for this build was to do things I had never done before.” That would include metal bodywork, aluminum welding, making an expansion chamber, and his first real paint job. The result is one mean smoker, a big-bore two-stroke that’s properly fast and scary. Says Alex of the riding experience: “Fucking horrifying. It has drum brakes all around and is way too fast.” Aptly enough, Alex has named the bike “Death Trap.” Tommy Canellos (@canellos_racing) of Ontario was fortunate enough to grow up in a large family of motorcycle gearheads, watching his dad and uncles race on cool vintage machinery. Last year he built his first supermoto race bike: “I raced a full season on that bike (1970 Kawasaki 350 Bighorn) and had so much fun I wanted to build the CR500 as a follow up!” The Honda CR500, liquid-cooled from ’85 onward, has to be one of the most notorious motocrossers ever built, a 60+ horsepower open-class smoker known to wheelie with the slightest twitch of throttle, punishing lesser riders and rewarding the worthy with one of the most thrilling powerbands ever conceived. Says Tommy: “I wanted something faster than my other supermoto, and really what’s faster than a CR500? I want to stress that this will not be a trailer queen!! I fully plan on running the snot out of it at the track!!!” The bike has been thoroughly dyno-tested, producing 63 rwhp with a broad spread of torque. Tommy tackled most of the work at home, including paint, zinc plating, and a full suspension rebuild, and wants to make sure to thank Bondi Engines and Richard Biggs with machine work. Eric LeVine, who runs a Seattle design studio, grew up in Southern California, where he cut his teeth riding many of the legendary SoCal canyons, deserts, and dunes. He’s set multiple speed records at El Mirage and the Bonneville, and he likes to build slightly enigmatic machines — the kind that require a double-take to identify. Inspired by his childhood dirt bike obsession, he decided to build a street-legal supermoto version of the legendary Elsinore, capturing the sensation of riding a 70s motocrosser on the street. Starting with a street-legal MT250 Elsinore, he swapped in the liquid-cooled engine and brakes from a 2001 CR250R, upgraded the suspension/wheels/tires, and added all the lighting and signals necessary to make the bike road-legal — blended with the original lines of the bike. The result is something of a vintage sleeper, which looks almost like a simple resto at first glance. “The bike weighs 222 pounds, which makes it a quick, wheelie-prone bike to ride with friends to gatherings and confuse people at the local coff­ee shop.” Marc Martin is an Australian who grew up riding dirt bikes, but caught the fever for road-going customs about four years ago. With access to a workshop at his job, he set out to build his first custom, a 1975 Yamaha RD350, and what an amazing job he’s done. He went deep into the guts of the donor, rebuilding the engine from the cases up and re-jetting the carbs to match those nostalgic DG pipes, as well as de-tabbing the frame and lacing the original hubs to wider rims. Timeless Auto Trimming handled the seat and our friend Tom from Purpose Built Moto lent some solid suggestions while kitting out the build with PBM lights and a custom mudguard. All in all, this two-stroke ripper is quite the auspicious start for a young builder, and the riding experience is just as we hoped: “It’s great fun in the mountains and tearing through the suburbs with the front wheel in the air…. It handles really well.” 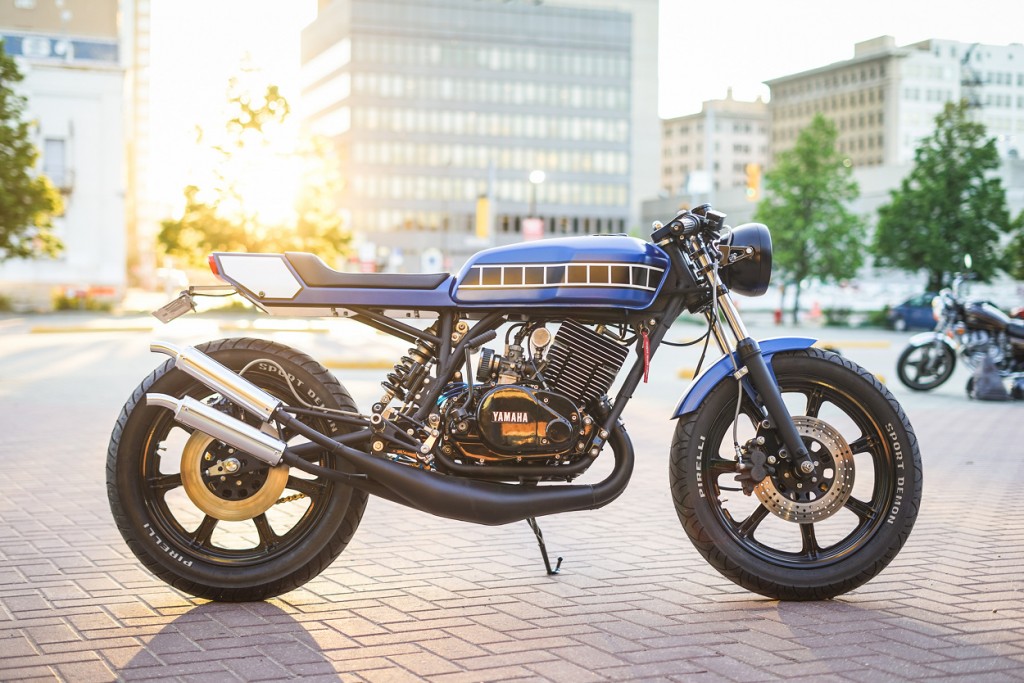 Derek Molinski (@bikeshop_dm) is a former auto body repair tech whose early obsession with building cars ended up leading to motorcycles, which are (usually) less expensive and take up less space. Then there’s the community aspect: “Motorcycle community – this is likely my favorite part of motorcycles. I have met some of the greatest people in my life due to riding/building bikes.” Derek is involved with the Moto Social in his hometown of Winnipeg and works out of a single garage, concentrating mainly on two-strokes. Derek decided to go with a cafe-style build, achieving those sought-after horizontal lines with a one-off steel tail, angular 76-78 tank, and rear monoshock setup, complete with an extended and reinforced swingarm. The motor was completely rebuilt with DG radial heads, mild porting, and HVC Cycle GP pipes. The result is a lightweight monster that begs to be flogged around town: “It’s hard not to bring the RPMs up, and rip it from light to light. Riding it slow does it no justice.” George Pickering is a Lincolnshire-based farmer and flat track racer who’s been working to grow the sport in the United Kingdom and via Greenfield Dirt Track. On the way home from a win at Dirt Quake last summer, he stopped for a few rounds of practice at another track, pitting next to Mike Hill of Survivor Customs, there riding his carb’d CRF450 framer. The two swapped bikes for a few laps around the track. “When we got back in the pits he said how good the two-stroke motor felt and we joked that we should stick my motor in his chassis!” That joke became a reality when George picked up a KTM 250 SX engine and brought it to Mike, who built a frame out of TIG-welded 16g BS4 T45 aerospace tubing with adjustable-offset yokes and an adjustable-length swingarm.  George and his buddy Steve Nicholls then stripped down the bike, had the engine powder-coated, and added a 300cc kit!  The exhaust is from John Riley in Redcar. The finished build weighs just 89 kg — 196 lbs! Jean Pierre Bonato (“JP”) — organizer of annual motorcycles events like the Sunday Ride Classic and Alpes Aventure Motofestival — had the idea to create a modern two-stroke sportbike that would look and seem like a factory-made machine. To transform this dream into a reality, he enlisted the help of two friends with deep experience building race bikes, mechanic Varm’Up Moto and fabricator Kerlo Classic. They started with the chassis from a 1999 Aprilia RS250, in which they swapped the liquid-cooled two-stroke 90° V3 from a 1984 Honda NS400R!  What’s more the engine has been bored to 470cc, complete with carbon reeds, digital ignition, Keihin carbs, Terry Shepherd exhaust, and more — good for 88 bhp @ 9885 rpm! The suspension and brakes have been brought up to modern spec as well, making the “SRC 475” a hoot to ride: “The pleasure of a really light bike with the 2-stroke character and sound!” Christopher Tope of Utopeia Moto Company found this 1973 Mudlark outside Dallas, albeit in rough shape. After building a surfboard bike, a café racer, and a desert sled, he decided it was time to build something a little more cold-natured: “When riding season ends, that’s the ultimate time to break out this bike. It’s the first of my builds designed to be ridden on the ice.” Aptly named “Ice Pick,” every feature of the bike has been designed to enhance the cold beauty of her nature: the iridescent paint by Krossover Customs, studded tires, moonstone-inlaid grips, diamond seat stitching, cold-rolled steel exhaust from Retrodyne, even the razor-like rear cowl — sharp as an ice pick. Of course, there was the added challenge of finding, salvaging, and fabricating parts for such a rare machine. Not to mention that Christopher, a field biologist by day, built this stunning machine out of his 10×12 toy hauler, attached to the 44-foot travel trailer he lives in — a rolling shop!