Here at BikeBound, we’re big fans of scramblers, desert sleds, and enduro machines. Apparently so are you, our readers, as several of the machines that made our list of the Top 10 Custom Motorcycles of 2020 were running knobby tires, enduro-style bars, and bash plates. We decided to follow up with a list of the most popular scramblers and desert sleds we featured this year, based on traffic and social shares. Without further ado, here are the BikeBound Top 10 Scramblers and Desert Sleds of 2020, presented in alphabetical order by builder. Backyard Customs Bali was started in the backyard of a rented house some seven years ago, founded by two friends who shared the same passions for art, design, and custom motorcycles. Their design philosophy is built on joy, function, and matching the bike to the rider’s character: “Custom bikes are a unique form to express ourselves, you are what you ride.” Recently, they completed this Yamaha Scorpio 225 for their friend and photographer Mario, who’s become a part of the family. “Concept is simple, we want Mario (owner) to enjoy this bike anywhere he wants, whether on smooth asphalt, loose rock, beaches, or even black lava sands.” During the process, Mario expressed his admiration for legendary Sherpa Tenzing Norgay, a theme for the build: “He wanted this build to represent Mr Tenzing on two wheels.” The Yamaha Scorpio 225 makes a solid base for such a tribute, a small but double-tough thumper that doesn’t know the word quit. They upgraded the bike’s suspension to handle multiple types of terrain, and British racing green recalls Tenzing’s rise to glory, for which Queen Elizabeth II awarded him the George Medal. Yamaha Portugal enlisted two of their country’s most talented builders, Ricardo Santos (Elemental Rides) and Nuno Capelo (Capelos Garage), to transform a brand new Yamaha XSR700 street bike into a “Back to Dirt” Yard-Built special. With this Yamaha XSR700 TT (“True Tribute”), they took their inspiration from Yamaha’s IT series of two-stroke enduro machines available from 1976-1986 — still highly respected in vintage racing circles. As intended, this bike incites sweet pangs of nostalgia for those of us who hold the IT series in high regard. The bike sits on 43mm Showa forks, a fully-adjustable Showa rear shock, and 18″/17″ Excel rims laced to Talon hubs. The tank is a custom-built steel unit with cutouts for the modern frame rails. The internals of the 74-hp engine have been left stock, but a new twin-filter intake and custom stainless steel exhaust system kick up performance a notch. Says Santos of the end result: “Suspension is tuned for light off-road use, and its powerful twin engine makes use of a much shorter final ratio to give the bike a truly gnarly acceleration in every gear. It just wants to pull wheelies all day long!” 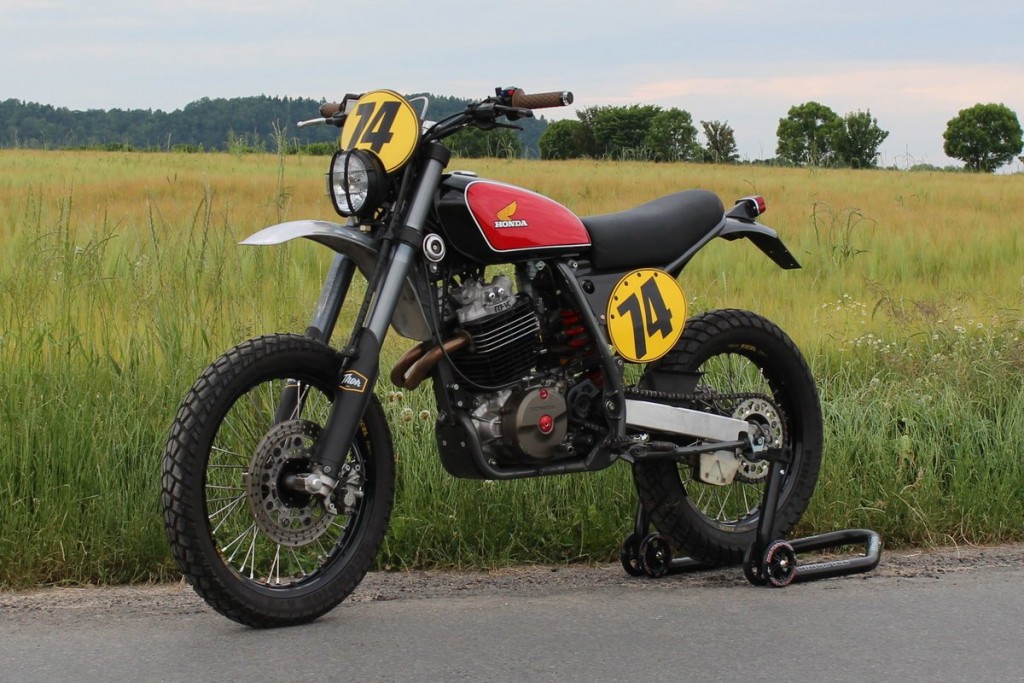 The good folks at Enduroshop.de set out to transform a dirt-only Big Red Pig into a street-legal scrambler: “Our interpretation of a small and agile bike inspired by the off-road bikes of the early 70s. Less weight, excellent suspension, strong brakes, sharp handling, and an engine with a lot of low end power causes a lot of fun when riding it!” Builder “Nuckes74” is a long-time motocross racer who wanted to a bike for the streets of his hometown, inspired by the off-road machines of the 60s and 70s. The project took about two years to complete, and includes a whole wealth of upgrades: “My expectations came true more or less: excellent handling and a short geared engine, riding it is pure fun. It always makes me smile. And when the streets are small and bumpy you can deal with larger bikes.” Bruno Ferreira lives in one of the most beautiful cities in the world — Porto, Portugal — where he has many years of experience working on a wind farm. He’s always owned motorcycles ever since he was 16, but it was only last year that he finally took the step to customize one fully for himself.  The inspiration?  A trip to the legendary Wheels and Waves Festival: “I always had the dream of creating my own bike, and now at 32 I got it. It all started last year when I went to the Wheels and Waves Festival… I went with a group of four friends, a group called ‘Witaca,’ hence the name I gave my bike.” The name “Witaca” derives from Ithaca, the mythical Greek island from Homer’s Odyssey — a name long associated with the desire for travel, adventure, and returning home after a long period abroad. The “w” in Witaca takes inspiration from Wheels & Waves, and the group includes Bruno’s friends Carlos, Jorge, and Rui — some of whom helped in the build. Bruno bought a ’98 Dominator for the donor, working out of his small home garage, and the project took about a year to finish. “Having a 22 year old motorcycle, full of technology, comfortable, with a lovely exhaust noise, unique in the world, passing on the road and everyone looking — is a spectacular feeling…” While some workshops are happy to turn out cookie-cutter customs that match a common brand image or silhouette, Yohanes Marse (“Anes”) of Indonesia’s Jowo Kustom and his crew continue to turn out a diverse portfolio of builds, each unique yet stamped with a recognizable Jowo style. This 2009 Yamaha SX225 had already been customized as a scrambler, but the owner wanted to give the bike a futuristic makeover — a brand new aesthetic for the old machine. Anes and the customer worked together on a visual concept, then the fabrication work began. Many of this Scorpio scrambler’s major elements are handmade: the gas tank, headlamp cover, subframe, seat, exhaust, and more. The bike now features double-disc front brakes, a heavy-duty swing arm, and a stainless steel plate and strap for the rider’s raincoat or tool bag — a nice touch. All of Jowo Kustom’s builds have nicknames, and this one is “BIMA” — a Sanskrit word meaning “The Great.” Rob Maxwell (@lucky.explorer) is an architect who grew up in the Scottish Highlands, where he was into downhill mountain biking, old cars, bikes, and scooters. Today, he has a collection of some 17 bikes, mainly 1980s thumpers and Paris Dakar bikes. The 1990 Honda NX650 Dominator you see here was originally built for Sandraiders, an annual adventure raid for classic bikes through Morocco. Says Rob: “There are a lot of Honda Dominator custom builds out there and most tend to follow the same pattern. I wanted to get away from that and build myself a proper lightweight off-road machine.” Rob came up with the design, then enlisted the help of several friends to make it happen. Most of the work was done at his friend Mark’s garage in Feltham, with the wiring loom and final finessing accomplished at Jackson Motorcycles. This big desert sled now sports a lighter subframe, overhauled suspension, Mikuni flat slide carb, longer-range Honda Paris-Dakar tank, custom seat and rack, lighter instrumentation and lighting, and more: “All in all, it is a lighter, more powerful, more aggressive, go anywhere version of the Dominator.” Pierre Rieep of France’s Motorieep is a former motocross racer who’s been building bikes since the tender age of 15. Today, Pierre works with his son and another mechanic building a wide array of bikes — many of them vintage or post-vintage dual-sports heavily modified to meet the performance standards of modern riders. In 2020, we first featured the “Motorieep 590TT,” then Pierre and crew rolled out this sleek and stunning Honda XL600R restomod. It’s running Yamaha YZ forks and swingarm, Excel 21/18″ wheels, handmade exhaust and bodywork, carbon fiber XT500 mudguards, updated electronics, rebuilt engine, and more. The bike now weighs 289 lbs fully fueled — 32 lbs lighter than the factory machine! Bret Johnson of Northbilt Customs is a veteran of the IndyCar series, USAC midget series, UMRA, and more as both a driver and mechanic, and his fabrication and mechanical skills were directly handed down from his father and grandfather. Today, some sixty years after its founding, Northbilt has evolved into a full-service motorcycle destination, housed in the same space that used to host Dan Gurney’s Indianapolis operation! This project started with the idea to build a scrambler version of a 1973 Honda CB350 Four, which quickly evolved into concept custom built to answer the question: “What if Honda built a CL350F, a Scrambler version of the CB350 Four?” That question carried through to every aspect of the build, as the team sought to build a modern custom from that fictitious model. Everything on the bike has been rebuilt, replaced, or customized — all the way down to the hardware, which is 99% stainless steel. Says Bret: “We built it like a race car so everything had to fit and work perfectly first and foremost and we definitely pulled that off.”

Honda XL250 “Rubicon XL” by One Down Four Up

Wayne Corbett of One Down Four Up is one of our all-time favorite builders. ODFU builds have taken multiple trophies at the prestigious One Moto Show, and today the shop focuses on custom motorcycle jerseys — all hand-cut and sewn in-house — as well as custom seat upholstery and purpose-built project bikes. When Wayne’s brother was planning a 2020 trip to run the Rubicon Trail in his Bronco, Wayne had the idea of building a vintage motorcycle to tackle the legendary 4×4 trail. Wayne had his work cut out for him, as the Rubicon is no joke even for a modern 4×4. For his two-wheeled donor, Wayne chose one of his favorite platforms, an early 70s Honda XL — in this case, a basket-case 1973 XL250. Everything on this “Rubicon XL” is functional for the rocky trails Wayne would face: a Honda TL trials bottom end for better gear ratios, Nitro Mousse foam tubes to prevent flats, revised rear frame with longer suspension travel, Mikuni carb, skid plate, overlay rear sprocket to switch between street and crawling gears, a proper Hella headlamp, and much more. James Fawcett of Slipstream Creations has worked as a graphic designer, auto mechanic, web developer, auto body pro, and in construction before opening his workshop. Today, he builds some of the most well-sorted Honda CB builds in the country, as well as some really nifty spark plug coat racks and phone stands. As we wrote of James’s work back in 2018: “James’s philosophy is less about wild, one-off fabrication than thoughtful execution of a design that accentuates the original lines, style, and unique character of each bike. The result are builds that are not mere showpieces, but rider experiences. Machines built to be ridden and enjoyed.” That’s as true today as it was then, and this 1971 Honda CL350 Scrambler is a prime example — a bike whose original character, style, and functionality have been amplified, brought into a greater state of realization. Says James of the project: “With this build, we wanted to turn up the dial on versatility and off-road ability just a bit, while keeping that vintage Honda style and charm.” To that end, James added taller suspension and DOT knobbies, whipped up a new subframe and seat, fabricated a panniers rack and skid plate, restored the original tank and graphics, and much more.