Though some folks complained of vibration from the 180-degree twin, the CB360 cost less than $1000, featured a new tubular frame with nicer welds than previous generations, and many motorcycle journalists noted the bike’s superb chassis and handling. One of the very best Honda builders in the business is James Fawcett of Missouri’s Slipstream Creations, who seems to have a special fondness for Honda’s vintage twins. Over time, he’s developed an aesthetic signature with his builds — while highly modified, they manage to preserve the charm, character, and style of the originals. Today, we’re excited to share this CB360 newly out of the Slipstream Creations workshop. The owner had started the build on his own, only for the project to stall.

“That’s when he reached out to us to help make his vision a reality. We were happy to take his bike in, already disassembled and sorted into various boxes and bins. After inventorying the original parts as well as a handful of new ones, we rolled up our sleeves and dove in.” “We think the bike is a great mix between modern updates, the original vintage equipment, and a fun retro vibe. It’s fun to look at, and even more fun to ride!” Amen! Below, James gives us the full story in his own words. The owner of this CB360 had begun the journey of building his own custom bike. But like many of us, a lack of time, tools, and experience caused the project to stall. That’s when he reached out to us to help make his vision a reality. We were happy to take his bike in, already disassembled and sorted into various boxes and bins. After inventorying the original parts as well as a handful of new ones, we rolled up our sleeves and dove in. To clean up and declutter the frame, any unnecessary tabs and mounts were removed. We then fabricated a custom subframe and seat hoop with a recess to flush-mount the LED taillight/turn-signal combo. The front turn signals are Motogadget m-Blaze Pin LED units, and we swapped out the original gauges for a single small speedometer with LED indicator lights.

With just two momentary push buttons on the handlebars, this CB’s electronic control hub, from NWT Cycletronic, enables the operation of all of the original handlebar control features. The upgraded modern regulator/rectifier, the compact lithium battery, the Charlie’s Place electronic ignition system, and the NWT control unit are all connected via a custom wire harness. The front forks were rebuilt, and the rear shocks were upgraded with units that offer preload and damping adjustments. The original, narrow steel rims were replaced with 18” aluminum rims, and laced to the original hubs with new spokes. The finished wheels were fitted with beefy dual sport tires. We often swap drum front brakes for the more modern hydraulic disc systems, but the original front drum brake adds a bit of retro flavor to an otherwise slicker, more modern finish. To keep debris off the engine, particularly the air filters and the rebuilt Keihin carburetors, we added a discreet rear inner fender. A compact front fender helps keep the front of the bike a bit tidier too. The CB360’s original exhaust headers were ceramic coated with satin black Cerakote and fitted with stainless steel reverse cone mufflers, with custom mounting tabs. To provide clearance for the new exhaust routing, we also modified the side and center stands. Having explored a variety of color and graphics options with the customer, we knew he was looking for something vibrant and fun to ride. The paint is a vivid, retro red, orange, and yellow color scheme, and it features a variation of the vintage Honda wing logo. The custom seat and upholstery even features a three-color stripe in the stitching to match the tank. The front fender and frame were both powder coated in a matching gloss white to complete this eye-catching theme. All of the work to complete this Honda CB360 scrambler was performed in-house — from custom metal fabrication, paint and graphics, powder coat, electronics, and upholstery. We think the bike is a great mix between modern updates, the original vintage equipment, and a fun retro vibe. It’s fun to look at, and even more fun to ride! 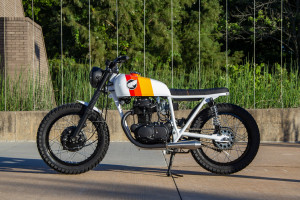 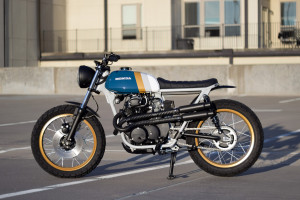 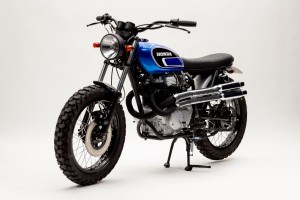 All The Little, Big Details: Honda CL350 Scrambler - Slipstream Creations builds a more versatile, capable Honda Scrambler… Introduced in 1969, the Honda CL350 was the factory scrambler version of the CB350 twin, one of Honda’s most successful machines. The 324cc, 33-horsepower parallel-twin engine […] Honda CB200T Café-Brat by Slipstream Creations -   ”A solid, reliable bike, good for transportation of the impecunious.” This is how the Honda CB200T has been described. The bike was the largest of the Honda CB Twin series that included the CB125, […]