Italy’s Moto Guzzi is the Europe’s oldest manufacturer in continuous motorcycle production. Founded in 1921, the company was first to the scene with a number of innovations, including the center stand, wind tunnel, and eight-cylinder engine. Today, they’re best known for their air-cooled, 90-degree V-twins mounted in a transverse fashion, placing the crankshaft down the center line of the machine.

Below, you’ll find some of the Moto Guzzi cafe racers we’ve featured here on BikeBound. Wild Silver: V11 Scura-Powered Café Racer - A Moto Guzzi Café Racer from Hardcore Division…  In 2001, Moto Guzzi introduced the V11 Sport Scura — a high-spec special edition of their “sportsbike par excellance.” It was a bit of a giant, weighing […] Wicked Goose: 1100cc Moto Guzzi Café Racer - A 105-hp T5 from Hardcore Division…  Lino Tonti was an Italian motorcycle engineer best known for designing the Moto Guzzi Tonti frame in 1971 — a chassis that would remain in production until the early […] The White Horse: Moto Guzzi V50 Sprint Racer - Glemseck 101 is an annual highlight in the motorcycle world, a three-day celebration of speed that takes place at the legendary Solitude racetrack in southern Germany. Built in 1935 near Schloss Solitude (Castle Solitude), the […] 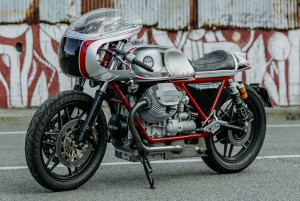 Prototype 1: Moto Guzzi V50 Cafe Racer - Vienna’s Horizontal Moto builds one sleek middleweight Guzzi… The Moto Guzzi V50 was a half-liter model developed in the mid-1970s. The company was in dire straits at the time and needed a model that could […] For Sale: Moto Guzzi California Cafe Racer - The Moto Guzzi California 1100 EV was a heavyweight cruiser that offered an array of sport-oriented features, such as adjustable suspension and robust four-piston brakes. The 1100cc pushrod V-twin was fuel-injected, offering 72 horsepower and […] Moto Guzzi V65 Cafe Racer by Ventus Garage - The Moto Guzzi V65 was introduced in 1982, an air-cooled 650 (643cc) twin in the typical Guzzi configuration. The bike was known for rock-solid stability at speed, and there’s an undeniable romance to an air-cooled […] 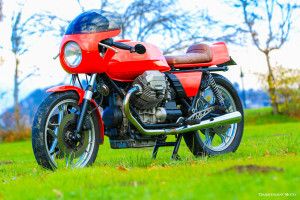 Moto Guzzi 850 Le Mans Cafe Racer - Nic Millan is a photographer and videographer who combines his passion for photography and motorcycles. Growing up in Southern Oregon, his first motorcycle was bought and ridden illegally: I had a beat up 1974 Honda […] Moto Guzzi 850 T Cafe Racer by Moto Motivo - Today, we are hugely excited to showcase the bike that won Best in Show at the 2016 Cape Fear Kick Down in our hometown of Wilmington, North Carolina:  this 1975 Moto Guzzi 850 T built […]